Data loggers have historically been used to improve car performance and are used by coaches to explain how drivers can improve. But a new device introduced by GPS company Garmin aims to be an accessible driver training tool in its own right

"Good apex." Over the roar of the Porsche Cayman’s engine, there is at last some positive reinforcement. Something has apparently been done well. While it’s not uncommon to hear a monotonous robotic voice emanating from a device mounted to a car windscreen, it’s not exactly normal to hear it while out on a race track.

Data recorders are nothing new in motorsport. They’ve been used in the upper echelons for decades, and are now a common sight at a grassroots level. Most do the same fundamental job, but the Garmin Catalyst, which was released in 2020 and which this writer tested at Thruxton a few weeks ago, is something a little different: it brings driver performance – and optimisation – to the forefront.

“As far as we can see and know we’re the only company to do that,” says Garmin’s Adam Spence. “Everyone else focuses around collecting data for the car itself and then people have to interpret that. We’ve taken a very different approach, which is we want to coach the driver.

“How are they interacting with the car? How are they changing their interaction? And can we optimise that to say, ‘This is how you can get better’? It’s about looking at everything you ever do on the track and saying, ‘Let’s pick out the best bits that we can stitch together into a lap you can actually achieve, and let’s put that all together to bring you to that optimum performance’.”

Real-time audio cues such as our ‘good apex’ encouragement are just one aspect of the device helping to offer positive reinforcement. 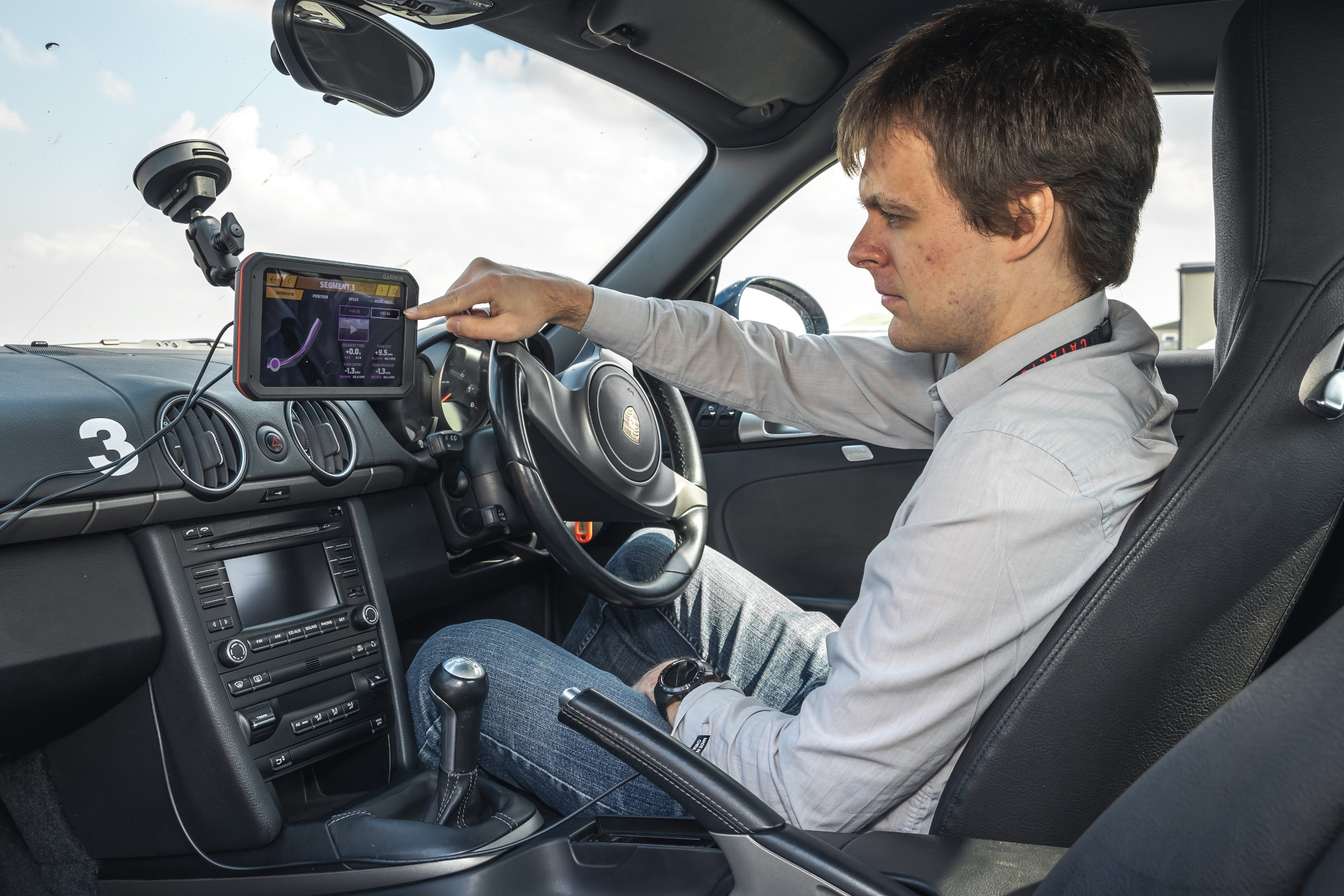 Despite not hearing anything else from the Catalyst during my time on track (hopefully not a sign I was that bad), I wasn’t short of advice, with Ben Seyfried, a professional driver coach at Thruxton for more than 15 years, alongside me.

As we quickly find out, the biggest selling point of the Catalyst is accessibility. With an easy-to-use interface, finding the right sub-menu is a doddle, but the real win is how quickly you can access the data and video. That’s something that impressed 2017 British GT champion Seb Morris when he tested the device.

“For a driver at my level even I would probably still use it on a track day,” he says. “I wouldn’t use it for the coaching element, I’d use it because of how damn quick it is at accessing the data and the video straight away.

"The device itself doesn’t have any maps loaded – everything that you saw when you went to do Thruxton, the device is building that automatically from what it’s seeing and experiencing from both a sensor perspective, to the camera perspective and the GPS" Adam Spence

“That saves you so much time. You don’t even have to get out of the car; it gives you the video of your last run and you can see very quickly where you need to find time. They’ve found a great gap in the market because [normally] it takes so long to get out of the car, download the data onto the computer and look at the video. This takes that out, which will give people more track time throughout the day.”

Footage from every lap is saved onto the device and it breaks the circuit up into sectors – nine for Thruxton – allowing the user to not only watch each lap, but skip instantly to the same sector from each lap. My line through the left-hander after Allard, for example, initially leaves me with turning lock as I apply the brakes into the 90-degree right into the Complex. By watching the video I’m able to see how I was positioning the car and improve next time out of the pits.

The same applies for the final chicane, where lap by lap I’m not only applying the brakes later, but also on the correct line into the corner. While I can feel I’m doing this in the moment with the encouragement of Seyfried, it’s good to see the gradual progression when played back. 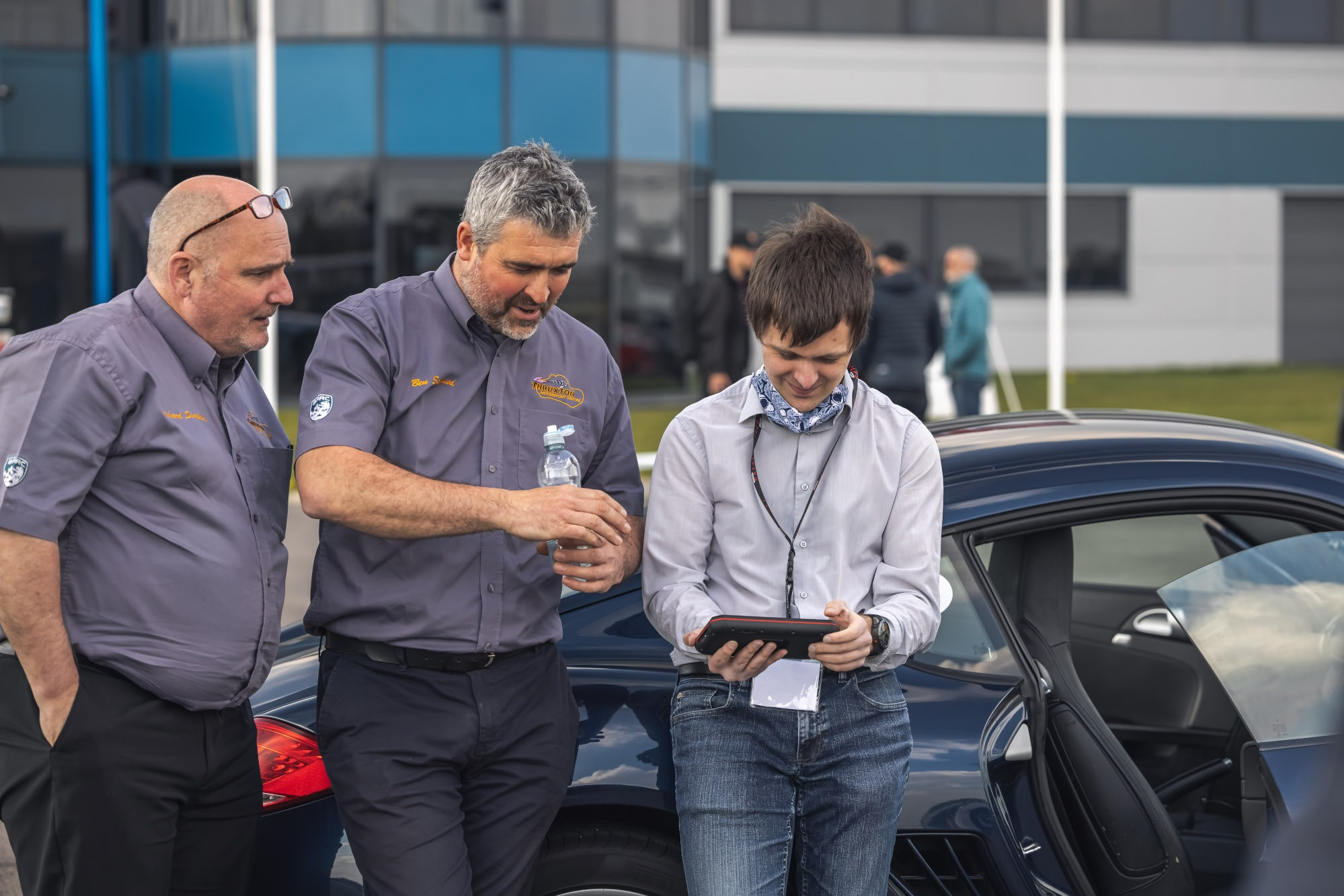 The Catalyst also offers an ‘optimised lap’ whereby it takes the best sector from each session and stitches them into one video to showcase your ‘perfect’ lap, essentially showcasing what you’re capable of.
Using Garmin’s GPS technology, it can also pinpoint your exact location on circuit and suggest whether you’re taking the best line, such as if you’re turning in too early or using enough of the track on entry or exit of a corner.

“The device itself doesn’t have any maps loaded – everything that you saw when you went to do Thruxton, the device is building that automatically from what it’s seeing and experiencing from both a sensor perspective, to the camera perspective and the GPS,” says Spence.

“It’s the fusion of that world which is really exciting, because that really is the first time you can see that and you can see it relative from one corner to another corner.”

There is also a lap timer, which indicates in real-time whether you’re faster or slower than your personal best, and a three or five-lap variant – this essentially shows how consistent your best laps have been via a percentage, and the lower that number the better.

It’s an incredible bit of kit, but as with anything there are limitations. The device doesn’t take into account weather, for example, and neither does it factor in other track conditions such as if a corner is off-camber or if the asphalt has started to deteriorate in a certain place.

It also can’t differentiate between a front-wheel-drive Renault Clio or a rear-wheel-drive BMW with twice the power. Yes, you can select the car before heading out, but this is to help log your run alongside different driver profiles rather than the device performing differently. 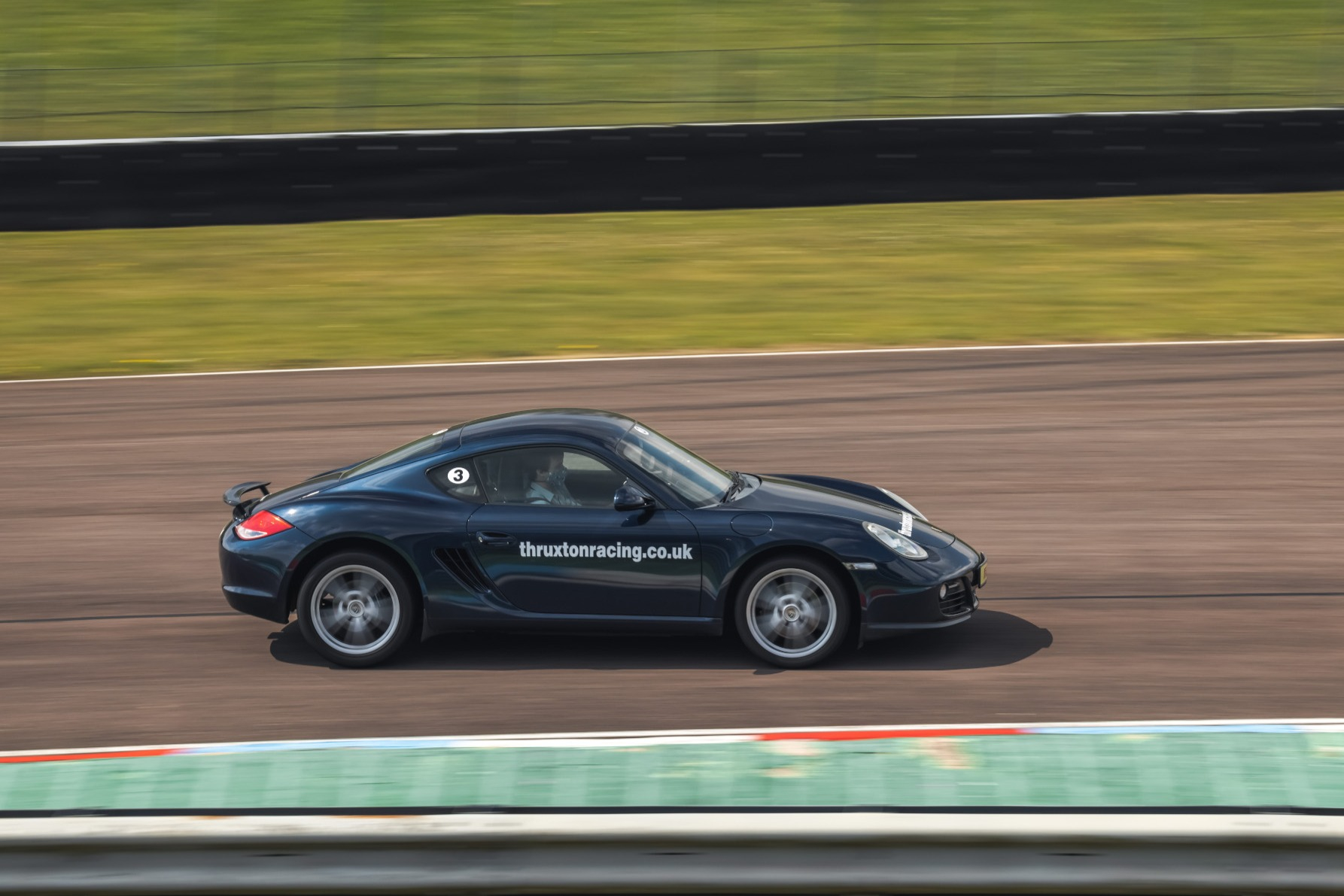 Catalyst has its limitations, with car type not taken into consideration

The biggest stumbling block with the Catalyst, though, concerns actually learning a circuit and the fundamentals of driving. Although it’s able to improve performance if a driver’s basic foundation is poor, such as missing an apex by several feet every lap, it’s not able to correct that fundamentally wrong behaviour.

Spence is quick to admit that the Catalyst is not aimed at complete rookies, and its primary use is to reinforce good driving that has already been instilled by coaching.

It’s an incredible bit of kit, but as with anything there are limitations. The device doesn’t take into account weather, for example, and neither does it factor in other track conditions such as if a corner is off-camber or if the asphalt has started to deteriorate in a certain place

“It’s not something we would recommend that a complete novice can get this and suddenly turn out to be a very good driver,” he says. “The design is not there to replace coaching, it’s there to enhance it.”

Without Seyfried alongside, I certainly wouldn’t have built up as much as speed. But as a coaching tool, with its instant access to the data and video, there’s no question that the Catalyst will allow drivers to have more seat time. At £899, and compared with other data loggers, it’s also reasonably priced, even for the amateur market. Just don’t expect it to be that chatty if you’re still learning a circuit! 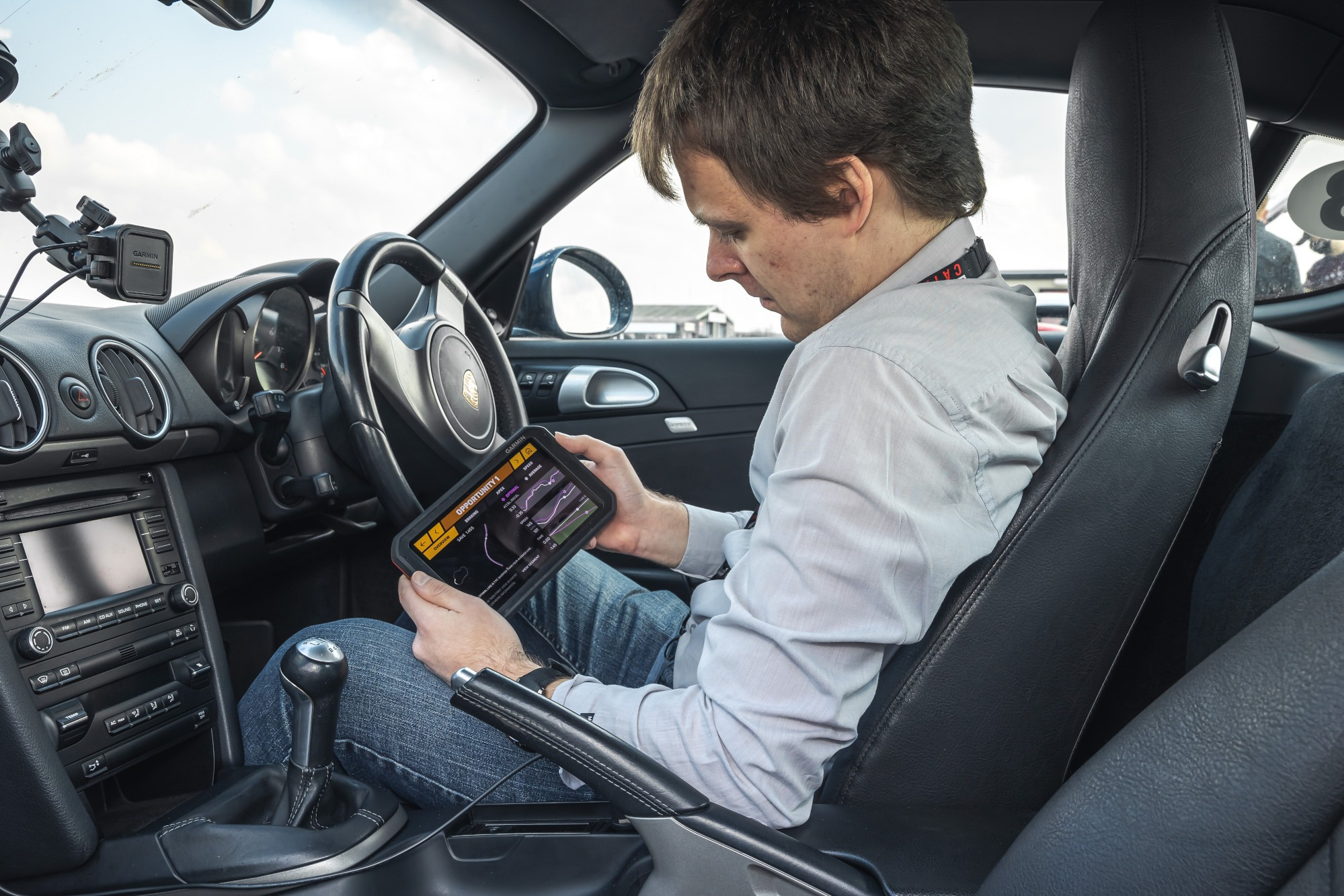