Smith’s win in the opening race came after a memorable contest where any one of six drivers could have emerged victorious. Poleman Smith fought for the lead in the early stages with former category champions Endaf Owens and Rupert Deeth, but it was not long before the trio were joined by Jordan, Aaron Smith and Historic Formula 1 racer Nick Padmore.

An unfortunate clash with tailender Richard Bartlett at Graham Hill Bend forced Owens onto the sidelines on lap 17 of 22, leaving Jeff Smith to claim a narrow win by 0.133 seconds from his namesake, while Jordan edged Padmore for third.

Race-one winner Jeff Smith saw his fortunes take a nosedive in a safety-car interrupted sequel when an attack for the lead on Deeth at McLaren ended in tears. Deeth was able to continue and bring his damaged car home third, while Jordan recovered from being forced off track at Druids on the opening lap to claim the win ahead of Ashley Davies.

Jordan’s father Mike had a more comfortable run to victory in the first Mini Se7en race, dominating the event from lights to flag after Connor O’Brien was forced to retire early. Ross Billison recorded his best result of the year with second after resisting race-long pressure from Glen Woodbridge.

Jordan Sr repeated his success in race two after powering his way into the lead from eighth on the partially reversed grid by the Cooper Straight halfway around the opening tour. Joe Thompson traded fastest laps with Jordan as he applied late pressure, but it was to no avail, while Woodbridge capped a strong weekend with another third-place finish, despite a misfire denying him the opportunity to harry the leading duo. 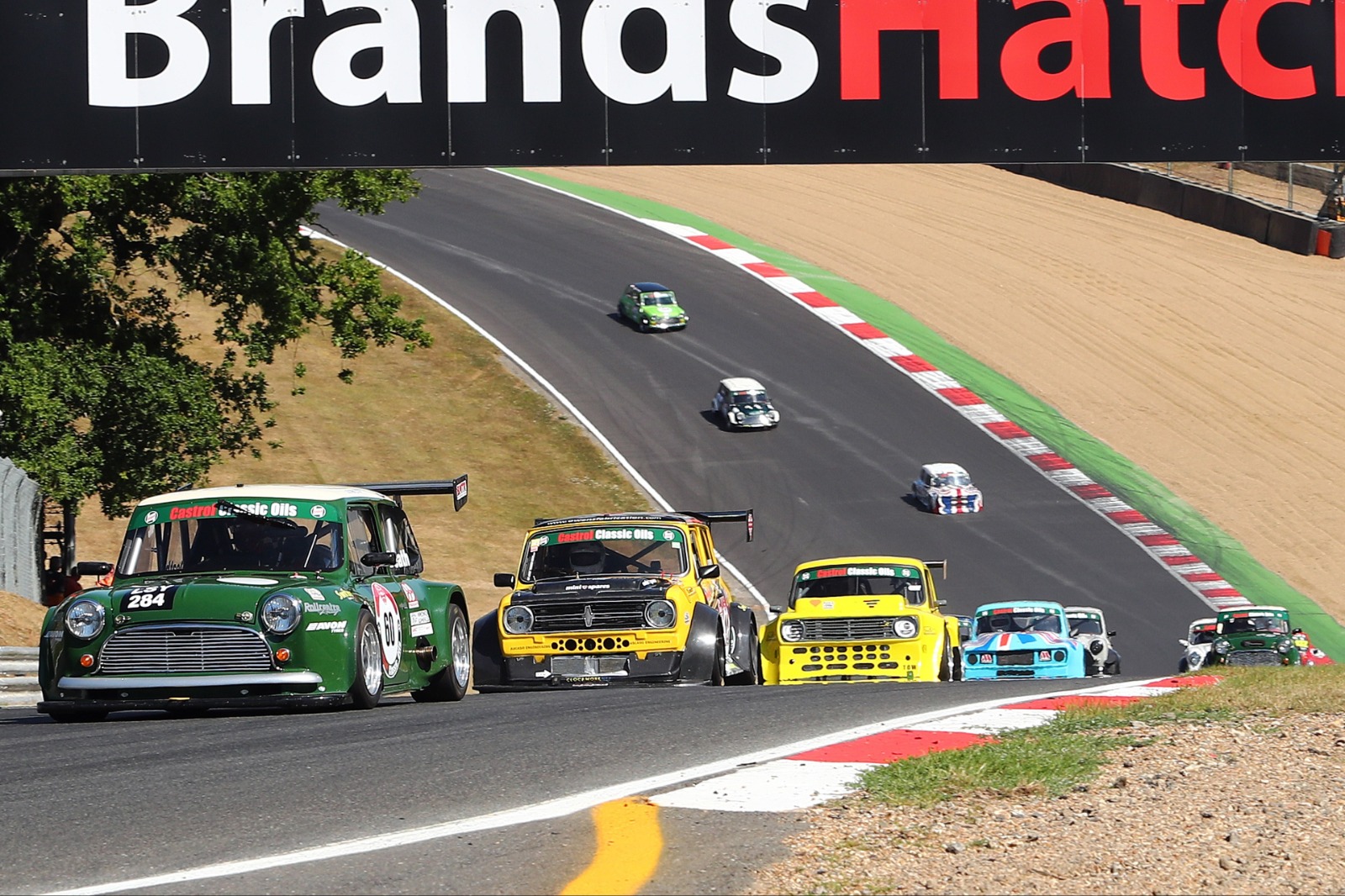 Harvey Death retained his crown as driver of the Fastest Mini in the World when he guided his V8-powered Cooper S to a double success for the second consecutive year. Bill Richards brought his Maguire Mini Duratec Traveller home second in race one after indulging in an entertaining battle with Richard Billingham’s 300bhp Austin Mini Clubman, although Billingham’s challenge was blunted when a broken alternator belt slowed him in the closing laps. Billingham beat Richards to the spot in a second encounter that was reduced to five minutes following a race-stopping shunt for Richard Morris at Paddock.

Neven Kirkpatrick’s win in the first Super Mighty Minis race may have looked simple on paper, but he was hounded throughout the 20-lap contest by the pursuing Stuart Coombs, Steven Rideout and David Kirkpatrick, and just 0.49s covered the quartet at the finish. Kirkpatrick led home brother David to seal a double success later in the afternoon, while Sam Slater fought off Mark Price twice to seal both concurrent Mighty Minis class wins.

Joe Ferguson cantered to victory in the first Pre-’66 Mini bout, leaving Jeff Smith to battle with fellow Miglia racers Aaron Smith and Chris Morgan over second. Jeff Smith won race two ahead of a disgruntled Ferguson, who felt the cause of a damaged toe link was the result of too much contact during the race.

Away from the Mini excitement, current National Formula Ford 1600 points leader Jordan Dempsey claimed a dominant victory from pole in the opening United Formula Ford/Champion of Brands race on Saturday aboard his Kevin Mills Racing Spectrum. American teenager Colin Queen (Ray GR18) took second after passing the Van Diemen JL13 of Lucas Romanek at Paddock on lap seven of a contest that was disrupted by two caution periods.

Dempsey was unstoppable again in the second race and claimed a lights-to-flag triumph from Queen. Morgan Quinn (Van Diemen RF99) eventually came out on top in a thrilling battle for third after the Ray of Shawn Rashid was baulked by tailenders at Clearways on lap 16 of 24.

Former Production GTI champion Martyn Walsh celebrated his first start in the series this year in perfect fashion by taking victory in the opening race, although tyre wear concerns dropped him into the clutches of Henry Riley in the closing laps. The pair made contact on the first lap of race two at Clearways as Riley powered his way in front before taking the spoils. Walsh salvaged second after a suspension breakage sidelined Simon Vercoe, while third was claimed by Paul Blackburn after a fine charge from last on the grid. 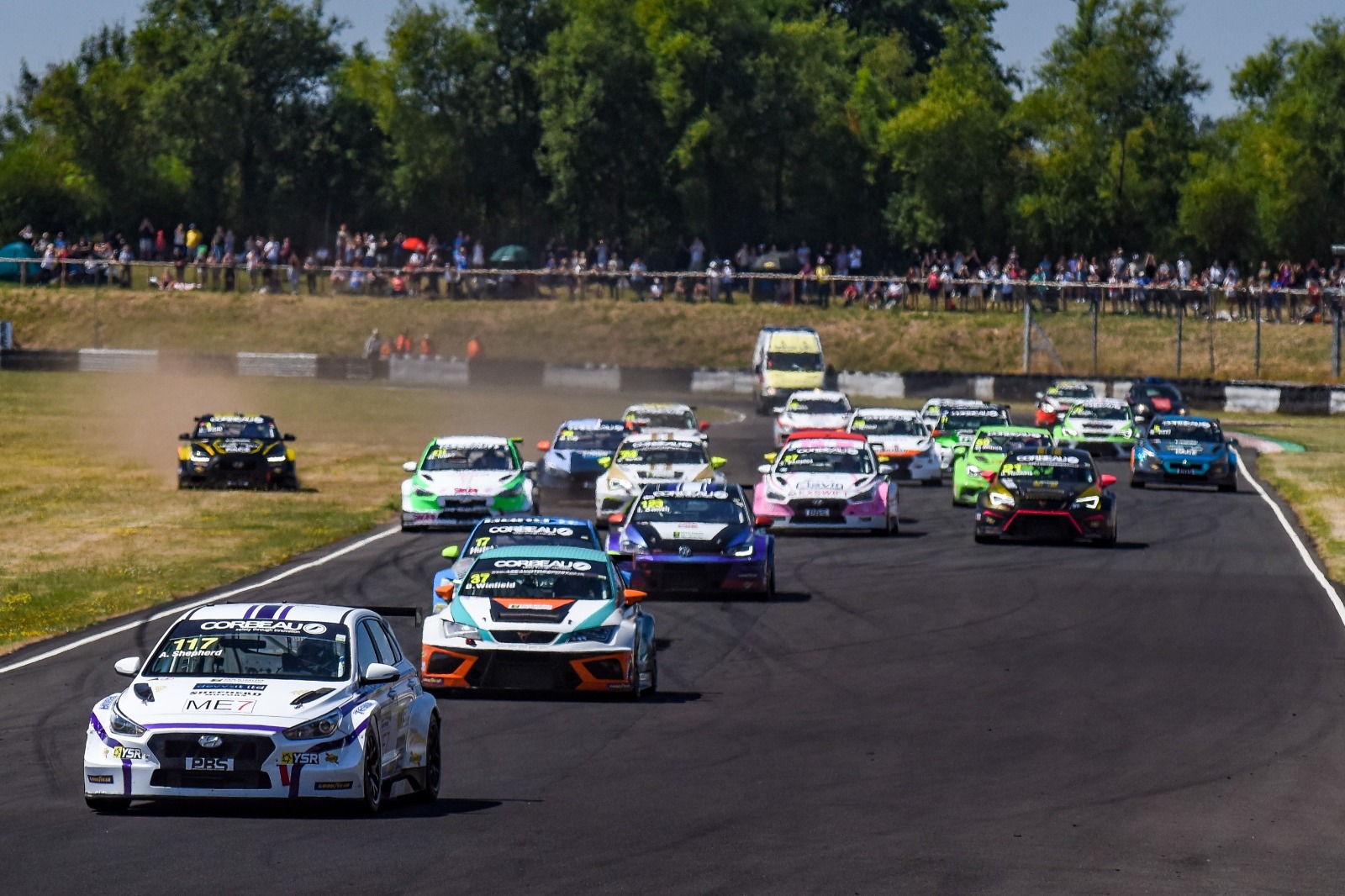 Chris Smiley stalled from pole in the opening encounter, with everyone mercifully managing to avoid his stationary Honda Civic, before the safety car was deployed when Jamie Tonks (Cupra Leon) ended up in the barriers at Quarry.

Adam Shepherd led at the restart and looked to be on course for a maiden win after resisting pressure from Winfield’s Cupra throughout, but he was cruelly denied by a puncture on his Hyundai i30 at the final corner and had to settle for second. Bradley Hutchison finished third after fending off points leader Isaac Smith, whose closest rival Max Hart retired with a broken driveshaft, while Smiley recovered to fifth.

Matthew Wilson and Jac Constable lined up on the front row for the reversed-grid race, but both jumped the start and were then beaten into Quarry by Ley. After remaining close behind, Constable eventually sliced up the inside into Bobbies to snatch the lead with Wilson soon taking second, but 10-second penalties demoted Constable to third and Wilson to ninth.

Ley’s Hyundai, which was involved in a frenetic late scrap behind, was handed a 0.088s victory ahead of Winfield, who initially was also penalised for track-limits abuses before being reinstated in second. Smiley finished fourth to move into second in the standings, while Hart was struck with mechanical gremlins again. 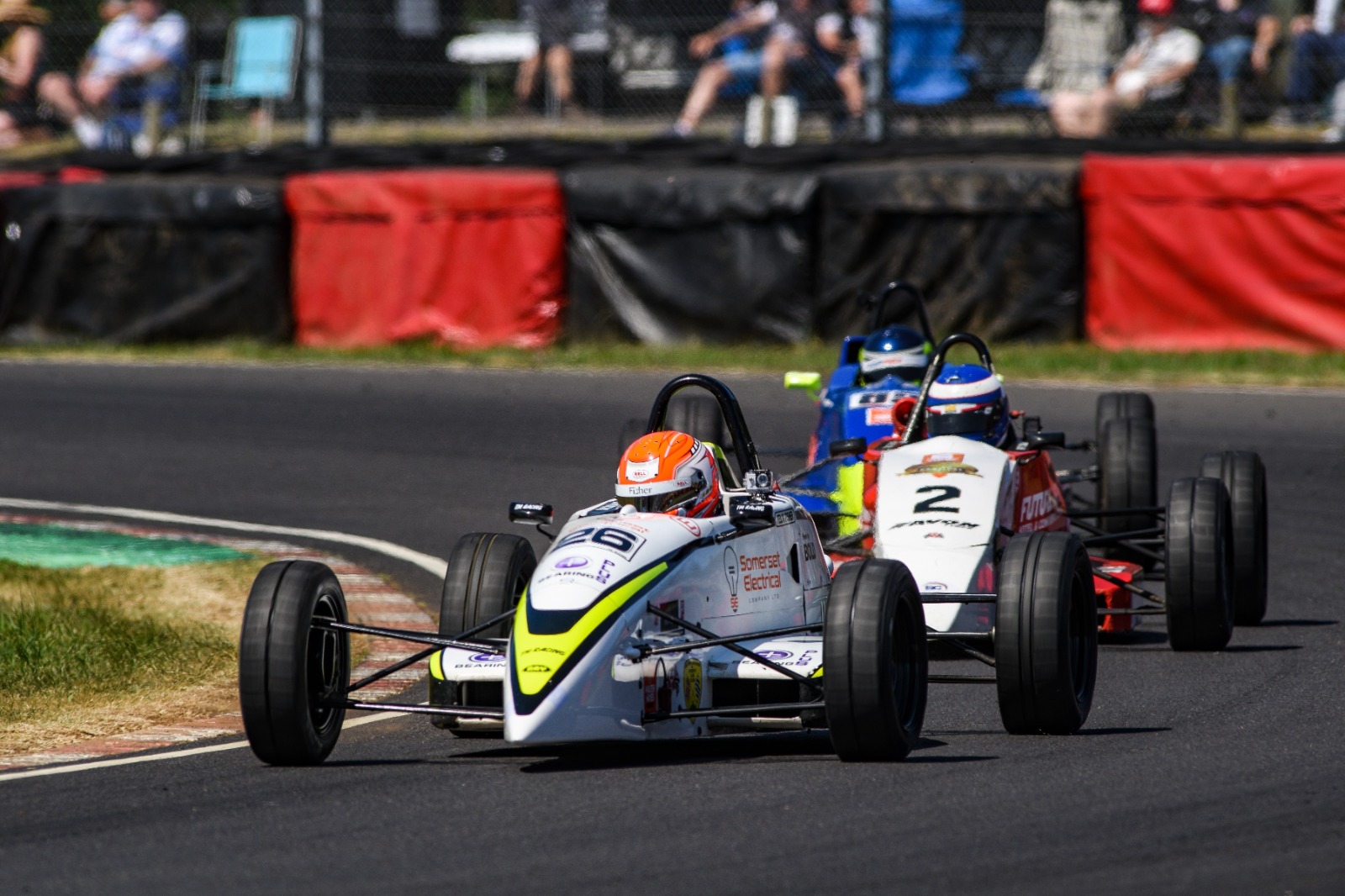 Felix Fisher did the double in CCRC Formula Ford to boost his hopes of a first title. Chief rival Luke Cooper made slow getaways in both contests in his Swift to run third behind Ben Mitchell (Van Diemen JL16), who grabbed the lead from Fisher at the halfway stage in race one. But a bad exit from Bobbies allowed Fisher’s Ray to reclaim the place into Camp, with Cooper capitalising to also take second. Fisher had checked out by the time Cooper retook second in race two from Mitchell, who held off Tom Hawkins to finish third.

Alistair Camp took his fourth victory of the season in the opening Civic Cup race, leading from start to finish after a startline crash caused a red flag. Dan Thackeray and Matt Luff were within 1.5s in second and third, after both passed Ryan Bensley, who spun to the rear of the field before crashing out late on.

Mervyn Beckett led the first lap of the reversed-grid encounter before being challenged by both Harvey Caton and Will Redford on the run to Quarry, and then spun down the order after being rear-ended by Redford. A collision with Redford at the Esses put Caton out and handed the lead to Morgan Bailey, who then ground to a halt one lap later. Rob Butler eventually took victory ahead of Redford following a brief safety car period.

An eclectic mix of 14 cars took part in the opening CCRC GT race, which was won by Kevin Bird in a Porsche 991. He was chased hard early on by Keith Butcher’s Audi R8 before it suffered an issue, promoting Jamie Sturges to second in his VW Golf TCR. Bird again led home Sturges in race two.

Adam Prebble took his fifth win of the season in the CCRC Saloons in his Vauxhall Astra by 7.5s from Tony Hutchings, who was competing in his final race.

Reports by Mark Libbeter and Steve Whitfield. Photography by Gary Hawkins and Oliver Reid. Want more reports from the world of national motorsport? Subscribe today and never miss your weekly fix of motorsport with Autosport magazine