The 17-year-old trailed JHR Developments driver Sennan Fielding by three points heading into the final race but had the advantage of starting from pole.

He led away at the start while the more experienced Fielding scythed his way from sixth on the grid to third but was unable to find a way past Arden rookie Ayrton Simmons.

"It's the best way to end the championship with a win although it hasn't really sunk in yet," he said.

"I was under a lot of pressure and I could see Sennan was in third and I thought he could get really close."

Fewtrell's only slight mistake was a wobble at Stirlings early on.

"That was probably the scariest moment of the whole season," said Fewtrell, who is now eyeing a switch to Formula Renault. 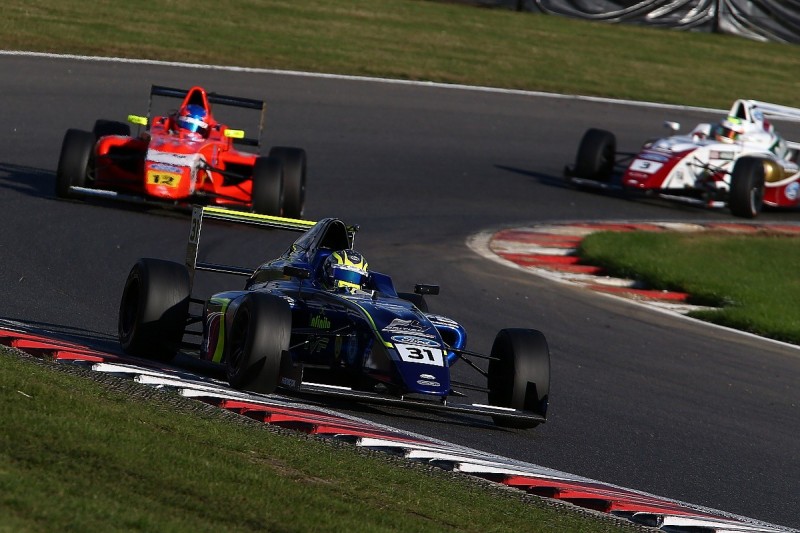 Fewtrell was one of six drivers heading into the weekend with a shot at the title but the star performer in the early stages of the season was Carlin's Petru Florescu as he took four wins in the opening half of the year.

The Romanian lost the points lead after being excluded from the Knockhill meeting, for punching team-mate Devlin DeFrancesco after a collision, which started a sequence of poor results and dropped him out of contention.

Team-mate Fewtrell then took control after a consistent season but it was Fielding who headed the standings into the Brands finale after the Carlin racer had a miserable time at Silverstone two weeks ago.

Bushell then failed to finish the finale either after Paul Rivett attempted an optimistic move on Whorton-Eales at Graham Hill Bend that sent the Jamsport driver into the path of Bushell. Seventh place was enough for Whorton-Eales to take the title.

The Ginetta GT4 Supercup also had a thrilling conclusion as Tom Wrigley won by just three points from Will Burns - despite enjoying a lead of close to 100 heading into the Rockingham weekend in August.

Daniel Cammish and Will Tregurtha had already wrapped up the Porsche Carrera Cup GB and Ginetta Junior titles respectively.