There was Dutch delight in Belgium for the Spa Six Hours as David Hart, son Olivier, and Nicky Pastorelli took victory amongst a plethora of other top racing. In the UK, Felix Fisher finally claimed Castle Combe's Formula Ford crown. The Irish Championship Circuit Racing titles were also decided at Mondello Park

Fifteen years after he won the Spa Six Hours in a formidable Shelby Mustang, Rotterdam’s David Hart finally repeated the feat last Saturday evening with son Olivier and Nicky Pastorelli in the DHG Ford GT40, winning by a lap.

The only drama the polesitting Dutchmen hit as they beat 17 other GT40s within the 87-car field came 20 minutes from home, when Hart Jr had the gear knob detach. “I had to change with the stick,” smiled the 23-year-old.

In a pre-1966 enduro that featured nine safety cars and rain after darkness descended – but no serious incidents – rivals’ fortunes ebbed and flowed. A clever fuel strategy and metronomic reliability helped Frenchmen Olivier Galant/Nic Minassian to second. Defending champions Olly Bryant/James Cottingham’s race went to plan until their engine dropped a cylinder with an hour to run. Late cautions helped them salvage third.

Richard Bradley, Michael ‘Barry’ Birch and James Hanson finished a meritorious fourth in Birch’s Pace Historics GT40, ahead of Belgian hero Eric van de Poele – from nearby Verviers – who started Ford president Jim Farley’s GT40 and overhauled Andy Jordan in the GTS10-winning Lotus Elan of John and Sam Tordoff for fifth. The JCT600 team’s story was remarkable, for Sr “fell out” after 40 minutes and was rushed to hospital. Discharged that evening, he was miffed to miss the podium.

Ward left it even later in Steve Osborne’s Maldon Salt Porsche 911, in which Rob Smith middle-stinted. Tom Smith was leading GTS11 superbly in the Dutch MGB of Sjoerd Peereboom/Jasper Izaks when he was clonked by a Ford Mustang. A quick stop revealed superficial damage, but cost victory by under five seconds. Mark Dols and Briton Adam Cunnington won their GTP section in the Dutchman’s home-made Marcos “Ikea Box”.

There was a Belgian Touring Car victory to celebrate, for Serge Libens/Thomas Dozin (Mustang) outran the similar notchback of Armand and Sam Adriaans/Erwin van Lieshout, a gravel visitor, by 90s. Falcon trio Bernd Georgi/Manfredo Rossi di Montelera and Vanina Ickx, Jacky’s daughter, were third, having been towed in with a broken throttle cable. 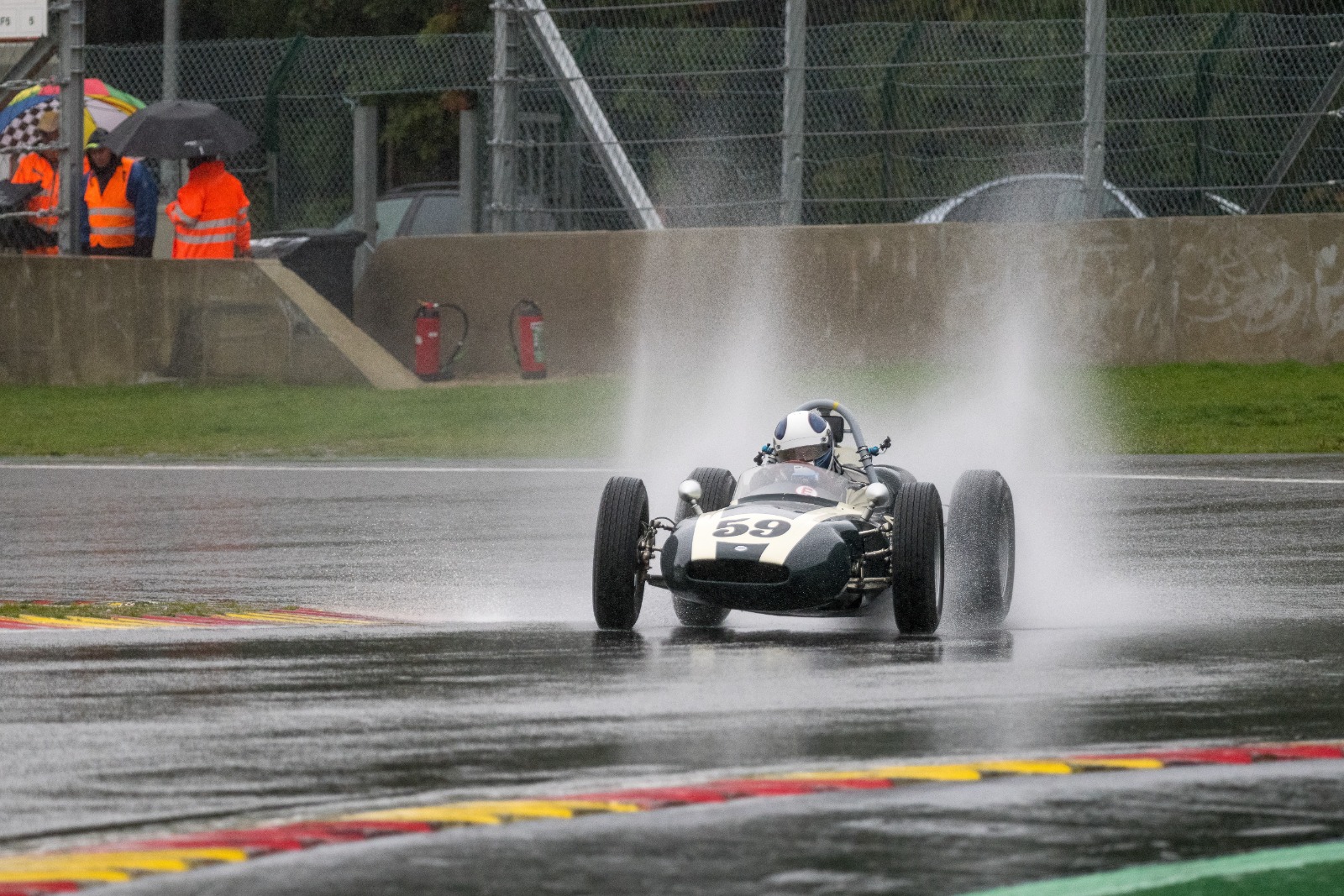 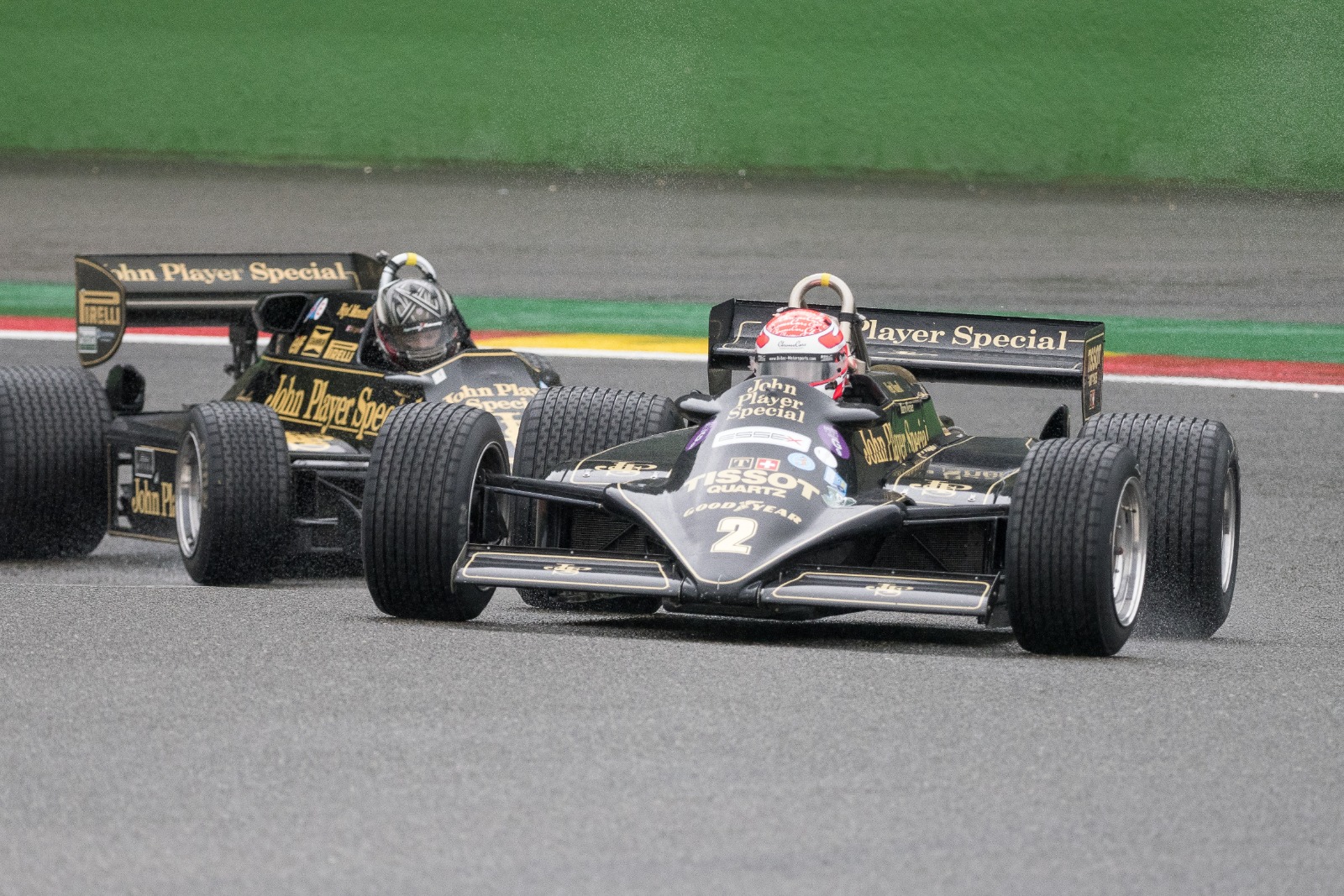 It was small-car Sunday weather in Sportscar Legends, Jon Minshaw and the Harts non-starting their Lola T70s. After half an hour behind a safety car in torrential rain, Tom Bradshaw (Chevron B19) dominated, but described aquaplaning downhill to Pouhon as “absolutely horrendous”. Rossi di Montelera (Abarth-Osella PA1) and Gans (Lola T290) disputed second. First V8 was Spiers/Greensall’s McLaren M1B, which lapped Steve Farthing (in Chris Jolly’s Cooper T61) “like I was going backwards”. 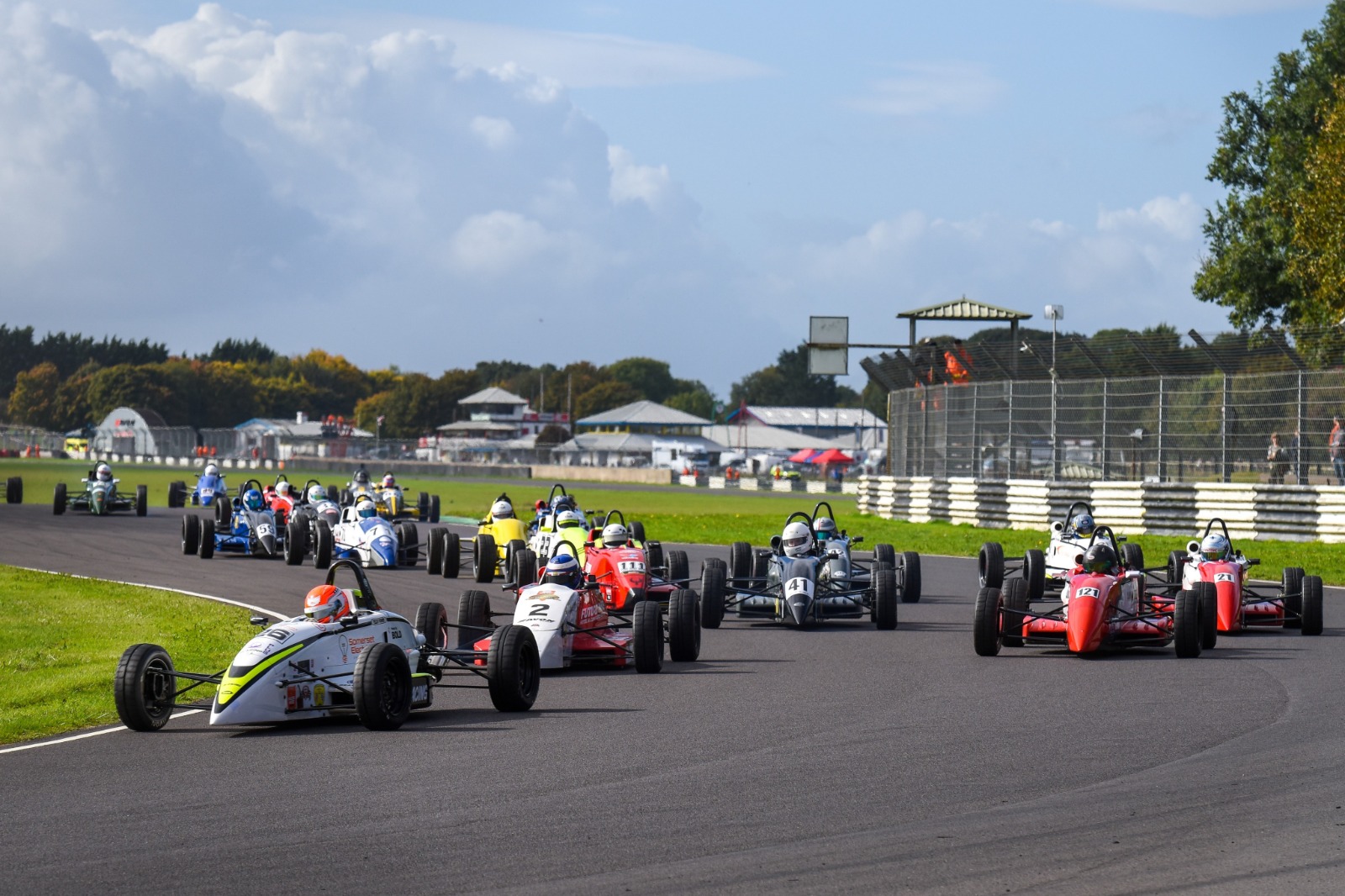 Felix Fisher leads opening FF1600 race, before slipping back to third, but still took the title

A podium in the first of two races was enough for Felix Fisher to claim his maiden Castle Combe Formula Ford title and become the third member of his family to secure an outright crown at the Wiltshire venue.

The Ray GR05 driver led the opening race initially after moving ahead of Ammonite Motorsport and Team USA Scholarship driver Thomas Schrage off the line, the young American having taken pole on his first outing at the circuit (see News). Fisher’s chief title rival Luke Cooper occupied second on the opening tour, which became the lead at the mid-point of the 10-lap race into Quarry, with Schrage also demoting Fisher. Cooper’s Swift SC20 was briefly challenged at Camp a lap later by Schrage’s Ray GR18, but the top three remained unchanged until the flag.

“I’m getting a bit emotional – that’s three people from the same family that have won the title outright,” said Fisher, who follows in the footsteps of his father Brian (three-time GT champion) and brother Josh (three-time FF1600 title winner). Fisher then put in a ‘champion’s drive’ in the sequel, with Cooper and Schrage again proving to be his main rivals. All three led at times before Fisher made the decisive move at Quarry just past the halfway point.

Adam Prebble was another younger sibling to claim a maiden overall title when he triumphed in the Castle Combe Saloons, matching the accomplishment of brother Gary from 2002. Prebble Jr’s Vauxhall Astra led comfortably but fell back to second behind his brother’s SEAT Leon Cupra midway through the 15-lap encounter after briefly losing power, before a loss of oil pressure forced the SEAT to stop on-track exiting Bobbies.

A one-lap shootout following a brief safety-car period ensued but, with a backmarker between himself and Robert Ellick’s Audi TT, Prebble took a comfortable victory and the overall title, while main rival James Keepin (MG ZR 160) could only finish second in Class C. 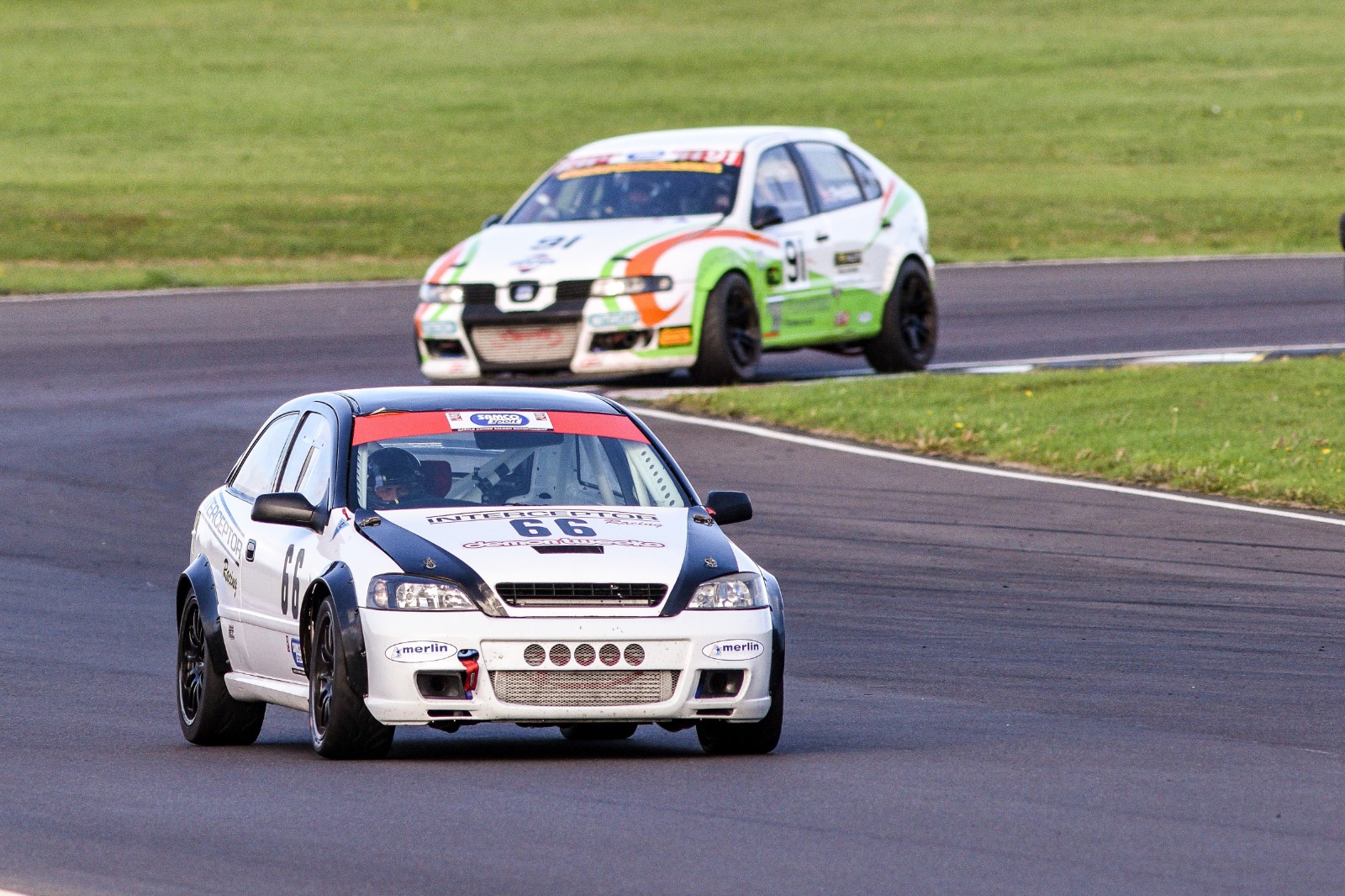 Neven Kirkpatrick secured another Super Mighty Minis title, taking victory ahead of outgoing champion Ian Slark after the first race ended prematurely due to a three-car crash at Quarry in the closing minutes. Slark won the sequel, having come through the reversed grid and pulled out a gap of more than two seconds before Kirkpatrick moved into second, where he remained until the flag. Ben Butler took a brace of wins in the concurrent Mighty Minis class.

Craig Dolby dominated the Castle Combe GT race, but running wide at Camp damaged the rear bodywork on his Volvo S60. The black-and-orange flag was displayed and, although the flapping bodywork detached by itself, Dolby headed into the paddock. It left newly crowned GT champion Kevin Bird (Porsche 991 Carrera Cup) to head home Dylan Popovic’s Ginetta.

Chris Southcott’s Honda Civic EK9 dominated both Castle Combe Hot Hatch races, but had to repass Sam Stride’s similar machine in the opener after dropping behind on the first lap.

Side-by-side action was a highlight of the Intermarque Silhouettes, with Daniel Smith (Mercedes SLK) making his second attempt around the outside of Reuben Taylor’s Peugeot 206 at Camp stick to win race one. Ian Hales, who had been unable to pass Taylor for second in the opener, won race two in his Vauxhall Tigra from Smith. 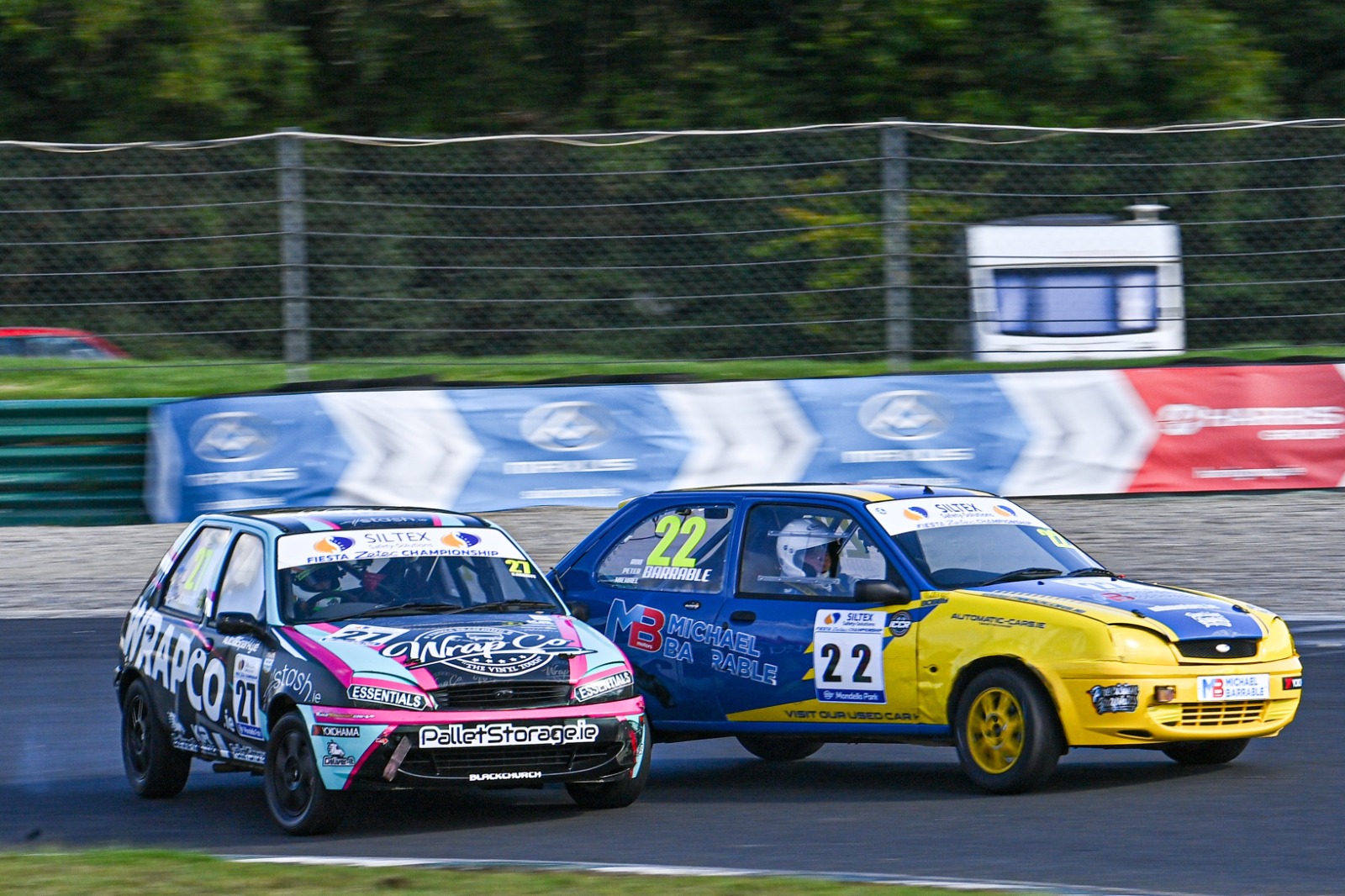 It was a day to remember for the Barrable family at Mondello Park during the final round of the Irish Championship Circuit Racing series. Michael Barrable fought his way to the podium in the second Fiesta Zetec race, which secured him the 2022 title, while son Peter took all three Irish Legends wins and a new lap record.

Newly crowned rookie champion James Byrne was delighted to qualify on the front row for the capacity Zetec grid and a superb launch meant he grabbed the lead into the first corner. He was eventually usurped by the charging Keith Rabbitt, who held on for an impressive win on his return to the series, as Byrne fell to fourth. In race two, Phil Lawless got his head down to escape the baying pack and brought it home for a popular win, from Byrne again and new champion Barrable Sr.

Guesting in an LOH Stryker, Rod McGovern beat poleman – and team-mate – Michael Cullen away in the opening race. Predictably, Cullen fought back and a superb battle ensued, with Cullen eventually forging his way ahead when a late-race mistake dropped McGovern back.

Second time round, Cullen led away but Andy Dalton, an electrical problem having been traced and fixed, shadowed the pair in the early stages. When McGovern ran wide, Dalton was through and kept Cullen on his toes before McGovern displaced him.

Harry McGovern surprised all the regulars with SEAT Supercup Ireland pole, but his accompanying low-power ECU left him helpless to hold off the pack. A great start from Shane Murphy from the front row gave him a lead he would hold until the flag, assuring him of the 2022 title. Barry English was next, from an inspired Graham McDonnell. Brian Berry took a red-flagged race two from a delighted Dave Maguire, who had suffered issues all weekend. 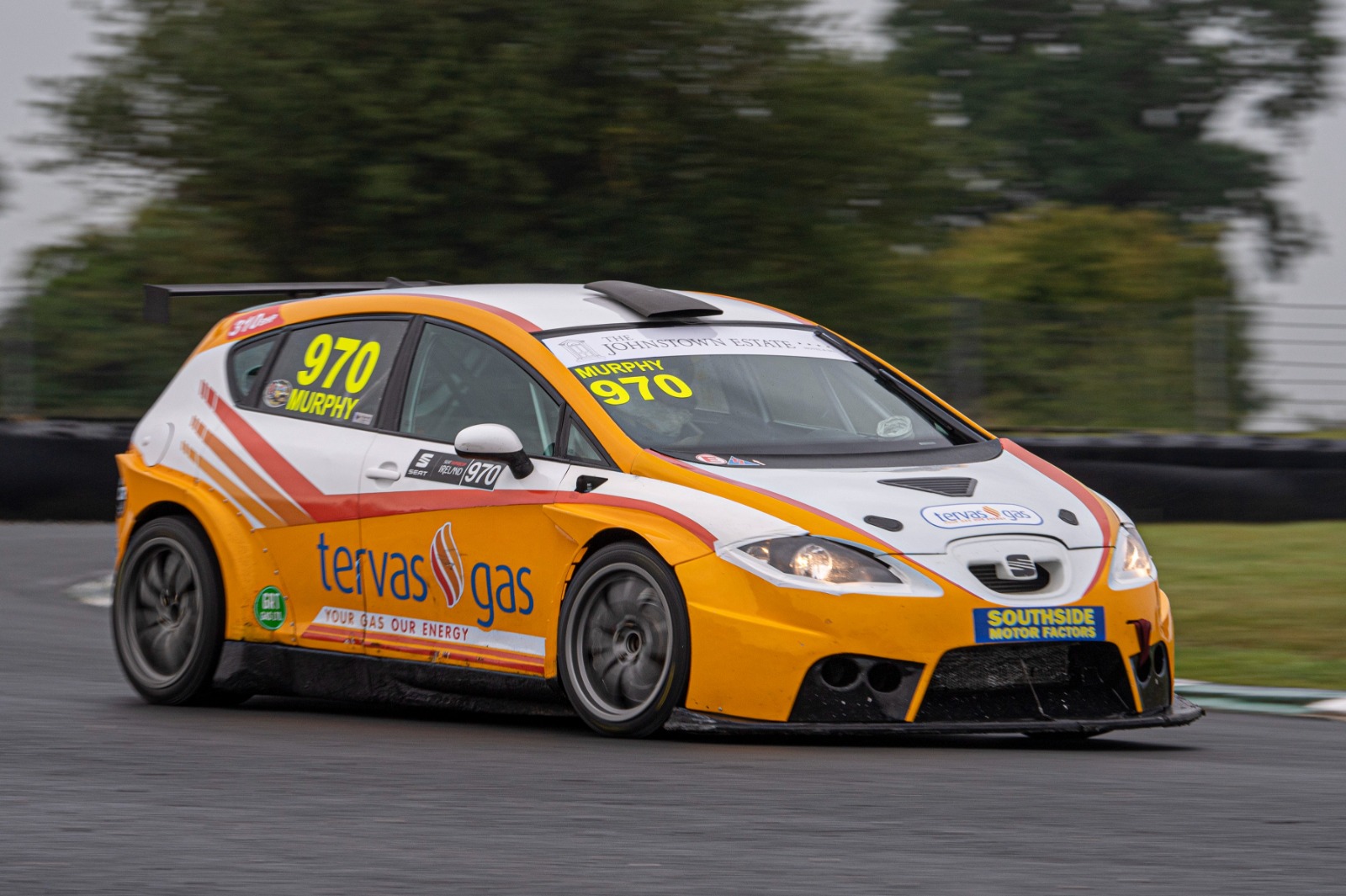 A great start in the opening BOSS Ireland race gave Michael Roche the lead and he initially eased away in his Dallara F306. But poleman Sylvie Mullins (Gould GR37) closed him down, accompanied by Tony Greenan and Aaron Gaughran. The quartet crossed the line as one with Roche in front but, crucially, Gaughran’s F307 had displaced Greenan’s F317 for third, assuring Gaughran of the championship.

In race two, Jonathan Fildes’s spectacularly driven Lola T96, which did not start the opener, charged past the F3 cars and grabbed the lead from Mullins, much to the delight of the crowd. Mullins fought back though and, when Fildes retired, he made no mistakes under a strong challenge from Gaughran to take the win.

Max Turley beat poleman Michael Cullen away in the first Fiesta ST race, with Phil Lawless climbing to third. Cullen began to pile on the pressure but a late-race brake failure meant he collected the leader, with both parking in the gravel and bringing out the red flags. A result was declared with Turley taking the win. Turley and Victor Cullen tangled on the main straight in the sequel, leaving young guns Christopher Grimes Jr and Kian O’Brien to scrap it out, with Grimes defending beautifully to take his maiden win.

Gavin Buckley dominated proceedings in a single non-championship Formula Vee encounter, crossing the line well ahead of Paul Lewis, who came out tops in a battle with returnee Stephen Morrin. Codey Keogh took a pair of Mini Junior wins, David Travers battling him mightily in a highly entertaining second race. 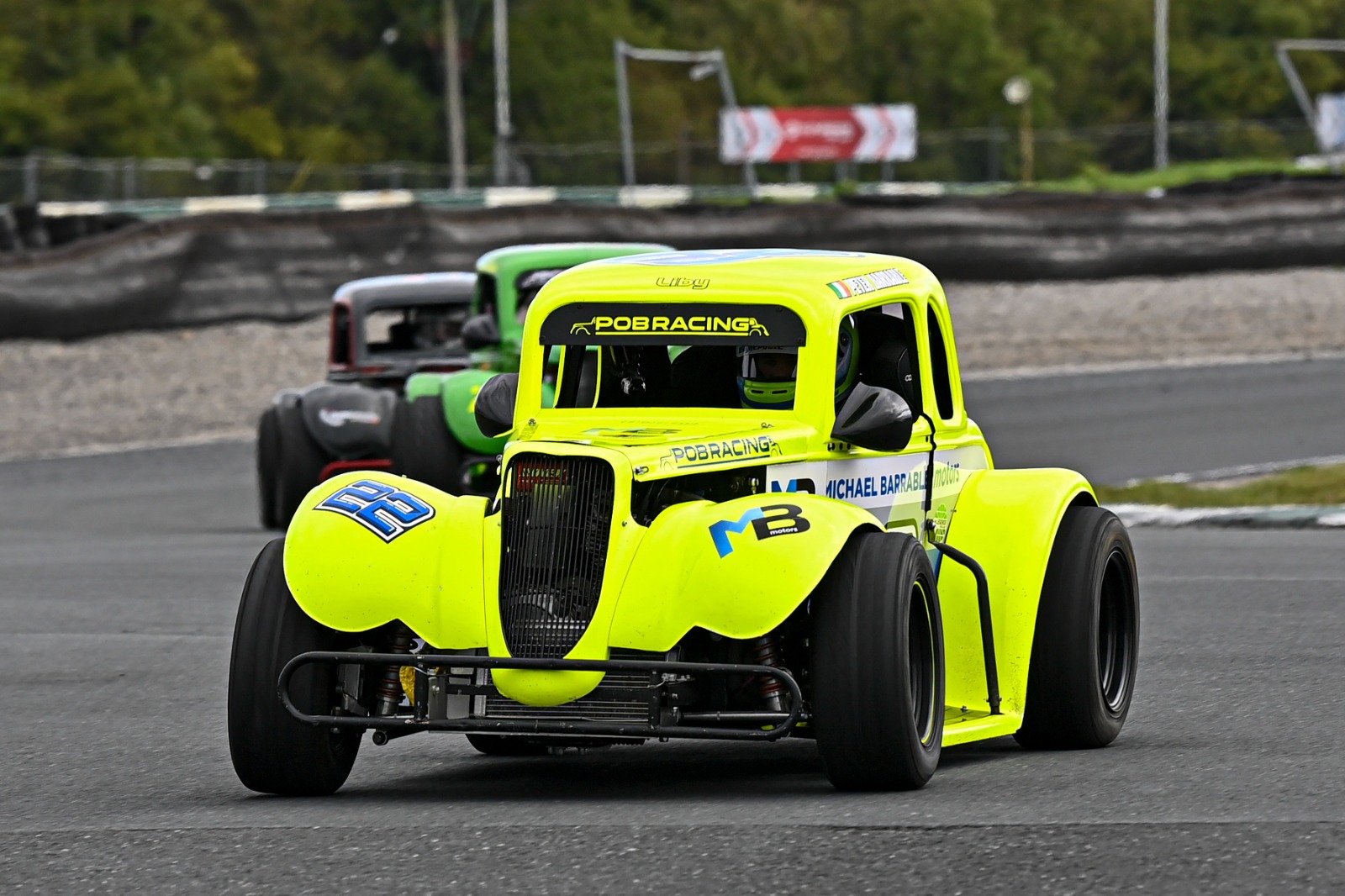