Welshman Evans - who had sealed the championship on the Ulster Rally in August just as his father Gwyndaf had 20 years before - was the pacesetter once Craig Breen retired from the event on the third stage.

Citroen World Rally Championship driver Breen did a one-off deal to compete on the Isle of Man in a Citroen DS 3 R5, but the engine failed early on Friday.

Instead it was Manxman and triple BRC champion Higgins - also in a one-off deal as Evans's team-mate at the DMACK squad - who was left to take the fight to his team-mate.

Higgins took until Friday morning to record a fastest stage time but set two in a row. Still, Evans looked to be cruising in a comfortable lead.

But on Friday's final stage, his Ford Fiesta R5 broke a driveshaft and his advantage was gone, as Higgins headed into the final day of six stages with a 17.5-second gap. A stage time he deemed to be incorrect could have given him an extra six seconds but was not awarded. 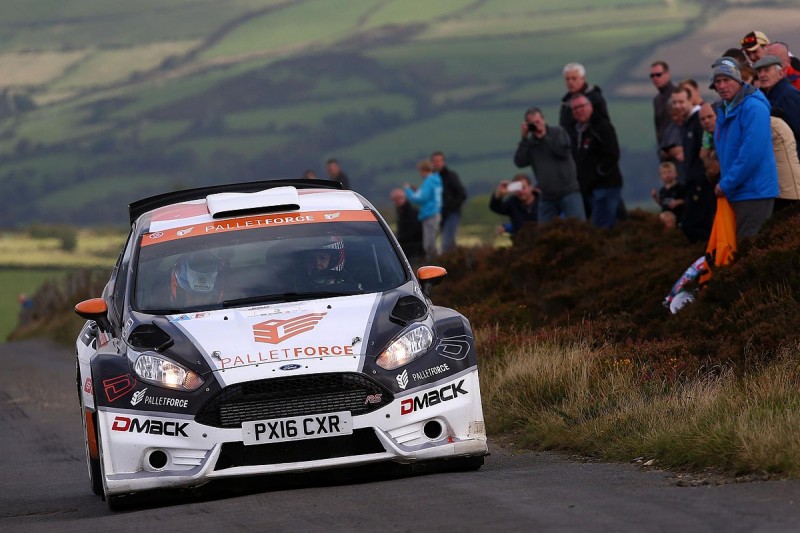 Evans duly set about eroding fellow Fiesta man Higgins' lead. After the first stage of the day it was down to 16.1s. Two stages later it was a tenth of a second and on SS19 he had reversed the order to lead by 8.4s.

The last stage involved an area known as Druidale, considered a Higgins speciality, but as the drivers reached the finish at the Isle of Man TT grandstand Evans had only lost 2.5s to his pursuer.

He duly secured a fourth straight win and his fifth of the seven-round BRC season.

Evans also currently leads the WRC2 championship standings, although his chance of that title is complicated by the class's rules over dropped scores and how many rounds competitors can register for.

Higgins sealed second ahead of Tom Cave, who made it an all Fiesta R5 podium. Cave fought off a rampant Desi Henry, one of the stars of the season in his Skoda Fabia R5.

Robert Duggan sealed a near perfect year with a dominant victory in the Junior category. The Irishman had also wrapped up his title on the Ulster and was competing merely for pride.