Scotsman Adam and team-mate Derek Johnston raced to second place in the season finale, having started from pole in their Aston Martin Vantage GT3.

The pair were handed the title after an uncharacteristic mistake by championship leader Jon Minshaw, who lost control of his Barwell Motorsport Lamborghini Huracan down the Craner Curves during the first half of the race and beached it in the gravel.

Johnston and Adam started the race on pole and made an early break with Alasdair McCaig's Ecurie Ecosse McLaren 650S in tow, and Minshaw slotting in to third.

Things came to a head when Minshaw got a run on McCaig down the Craner Curves, but was caught out by the closing speed as McCaig was trying to lap the GT4 car of Paul Hollywood.

Minshaw was forced wide, dipped a wheel into the gravel and spun down the track before nosing into the barriers at the Old Hairpin.

With the Lamborghini out of contention, Johnston and Adam only needed a top six finish to secure the title.

McCaig's team-mate Rob Bell stole the lead during the pitstops with the TF Sport car having to serve an additional 15 seconds on its stop, leaving Adam to trail him home in second.

The result makes Adam the first driver to defend title in the top class of British GT, and also the first to win it with two different teams. He won last year's title alongside Beechdean AMR team-mate Andrew Howard. 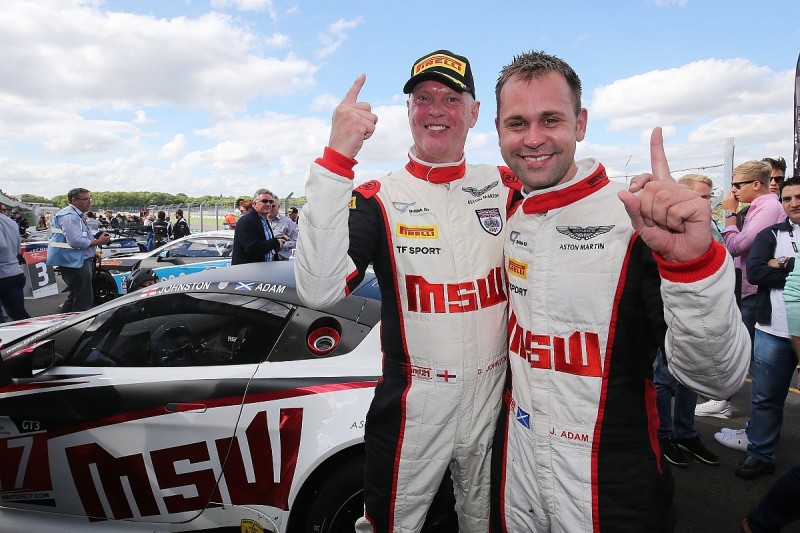 "To be a double champion is almost unreal, and to be honest I never knew about the records, so that just makes it extra-special," said Adam.

"Derek and I have prepared for this so well, with hours on the simulators and getting our heads into the game and this shows the hard work pays off."

Johnston added: "It hasn't sunk in, it's surreal. Jonny has been amazing all year and TF Sport has done such an incredible job with the car.

"We definitely want to be back here defending the title next season."