Thiim and Farmer will be expected to launch a strong title challenge, having finished 19.5 points adrift of champions Jonny Adam and Flick Haigh after a costly retirement at Spa when their Vantage ignited after contact (pictured below).

The TF Sport duo are the highest-placed championship finishers from 2018 that are confirmed for the coming season.

That is because Adam has a new co-driver for 2019 in Graham Davidson and runner-up Phil Keen will partner GT3 newcomer Adam Balon, meaning Thiim and Farmer bring rare continuity to their title assault.

"Last year was the first year for me [in British GT] and I had never been to most of the tracks," said Thiim.

"But this year I know the tracks and know which buttons to push and not to push to get the best out of Mark, so I'm definitely looking forward to it.

"There's always room for improvement - I can see Mark is really busy driving here and there.

"That's typical of him, he's a very hungry guy.

"He has days where he is over-motivated and days where you have to pump him up, so this season we go in with a good base." 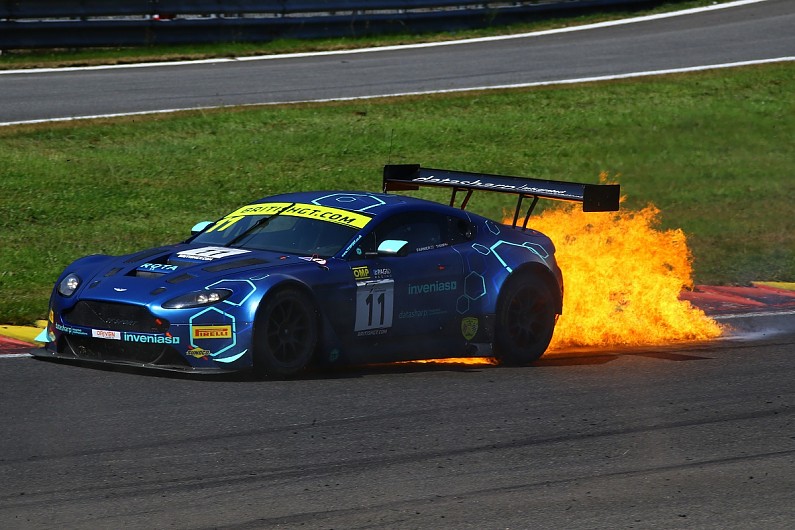 Thiim expects the new Vantage GT3 to be a considerable step forward for amateur drivers compared to the old V12 model, which bowed out after seven years with a fourth drivers' crown.

There remains a question mark over Thiim's participation in the first of British GT's two visits to Donington Park on June 22-23, because it clashes with the Nurburgring 24 Hours, which the Dane won in 2013 and has contested for Aston Martin in each of the past three years.

Thiim and Farmer have become the eighth GT3 pairing confirmed for the championship so far, including three set to drive the new Aston Martins.

Two-time champion Andrew Howard, who will share the Beechdean AMR Vantage with works Aston driver Marco Sorensen, is the only previous title-winner among the Am contingent, after Haigh, Rick Parfitt Jr and Derek Johnston all confirmed they would not be racing in the series for 2019.

GT4 champion Jack Mitchell will return to the GT3 ranks after a year away, sharing a Century Motorsport BMW M6 with Adrian Willmott.

It will be the first time the two-time Spa 24 Hour winning machine has raced in British GT.

Team Parker Racing, which won the 2017 title with Parfitt and Seb Morris, will enter at least one new Bentley Continental GT3 after replacing the original-spec car that was first introduced in '14, but has yet to confirm any drivers.