The event featured a track record 15 caution periods, with drivers complaining about a severe lack of grip all weekend.

Difficulty warming tyres was a major factor in the accidents, but race winner Kevin Harvick said the fault lay with the surface, not Goodyear.

"Obviously everybody was battling the tyres and the track, and I think it was like driving on a razor blade," he said.

"I don't think there were any issues with the tyre. I think the issue is the pavement and the things they keep repaving these racetracks with that puts Goodyear in a box.

"[Tracks] continuously put the tyre company and the competitors in a box with the type of asphalt that they keep putting on tracks.

"I think Goodyear has done a fine job with the tyre, when you have the cards that they're dealt."

Four-time champion Jeff Gordon agreed that action needed to be taken before further tracks were repaved.

"The biggest thing that I want going on right now with repaves is talking to the companies that pave these racetracks and talking to them about looking at the surface," he said. 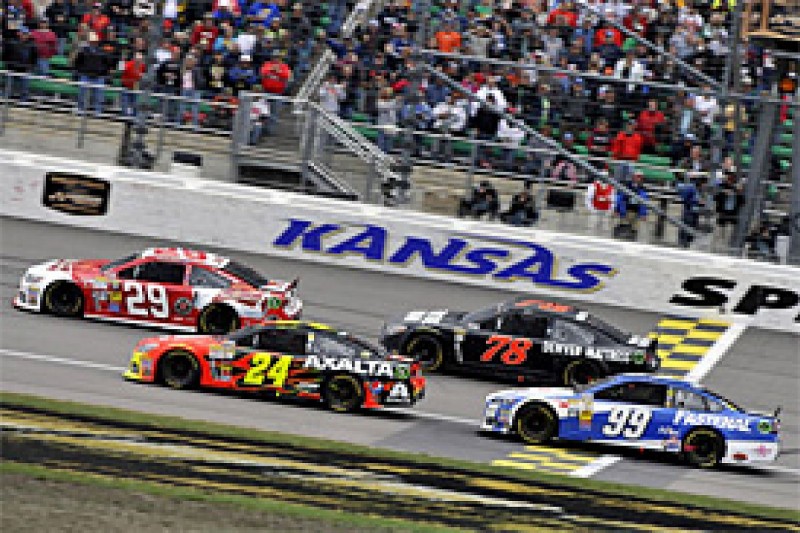 "It's not a Goodyear issue. Goodyear is doing the best they can. They've got a tough job.

"These surfaces are too smooth, and we don't want bumps. I'm not talking about bumps, I'm talking about the abrasiveness of the racetrack. It doesn't dissipate heat, doesn't wear the tyres, and all it does is cause friction and heat and failures, and then Goodyear has to build a very hard, durable tyre.

"We're paving these racetracks with what we're paving new highways with. This is not a highway, it's a racetrack and it's a race car and a racing tyre.

"It needs to be looked at differently. We have the same issue in Phoenix, Darlington, every repave that we've had over the last six, seven years."