The Richard Childress Racing driver had started from pole and led over half the race thanks to long stints up front at the beginning and end.

In between, he was on a recovery mission, having plunged down the order when he pitted under green just before a debris yellow in the early stages.

Going off-sequence on strategy mid-race brought Harvick back into the lead group, where he proved to have the quickest package.

The race featured a track-record 15 cautions, but in a longer green-flag run to the finish, Harvick was able to pull out a two-second lead over second and third-placed finishers Kurt Busch and Jeff Gordon.

Busch had come through from the rear of the field after crashing his Furniture Row Chevrolet in practice and requiring a switch to his back-up car.

Gordon fell foul of the same mid-pit-sequence caution as Harvick in the first part of the race, before recovering to lead the Hendrick group in third.

Joey Logano also had a spell up front before finishing fourth for Penske, whereas Carl Edwards was never a contender but ultimately picked his way through to fifth.

Edwards regained that place on the last lap when title contender Jimmie Johnson suddenly lost power. He was able to limp home losing only one place and is now just three points behind leader Matt Kenseth in the standings.

Kenseth was yet another race leader, despite finding his Joe Gibbs Toyota's handling "evil", before a pit speeding penalty proved very costly.

Paul Menard had one of his strongest races of the year, fighting for the lead repeatedly before ending up seventh, ahead of early frontrunner Dale Earnhardt Jr. 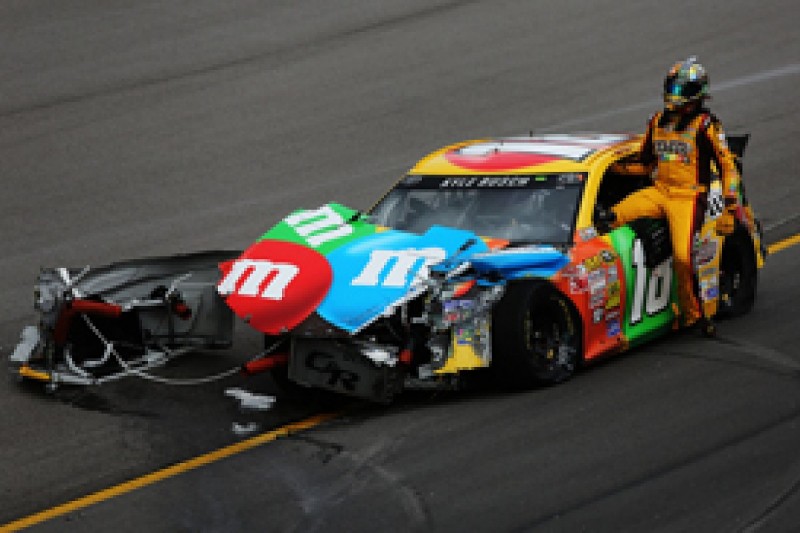 Outgoing champion Brad Keselowski lost ground when he pitted early in the first stint in the belief he had a tyre problem. He got back to the front with an out-of-sequence strategy, only to run out of fuel just before his last pitstop, leaving him 17th.

While Harvick's win brings him to within 25 points of the lead approaching the Chase's mid-point, Kyle Busch's title hopes faded at Kansas.

He joined his brother at the back following a practice crash, spun on lap one avoiding an accident that immediately eliminated Danica Patrick, then later had separate collisions with Juan Pablo Montoya and Edwards, the latter ending his race (pictured).