Kurt Busch sealed his and the underdog Furniture Row's Chase place with a battling runner-up spot, while Ryan Newman narrowly missed out on a title shot despite a storming late-race performance that ended with third place.

For most of the evening the lead fight was between Kurt Busch and Keselowski, in a fascinating contest that varied as their cars surged or slumped across stints and Furniture Row either had sublime or troubled pitstops.

Keselowski dropped out of contention when the yellow came out midway through the penultimate pitstop sequence following a crash for Jimmie Johnson, trapping the champion in the midfield.

The same misfortune also interrupted Kevin Harvick's victory bid just as he had hit the front, with both having pitted under green moments before the caution.

Into the closing stages Roush Fenway driver Edwards and Kurt Busch were making the running, until Newman suddenly began a blistering charge from seventh to first.

A win would have cemented his Chase place, but when Clint Bowyer - another earlier leader - spun in the final laps, the leaders all pitted and Newman fell back again.

He could only get back to third, as Edwards beat Paul Menard (who took just two tyres at the stops) away at the final restart and then held Busch at bay to clinch the win.

Jamie McMurray was competitive throughout on the way to fourth ahead of Menard and brief race leader Matt Kenseth, who starts the Chase as top seed.

Martin Truex Jr scrapped to seventh place and therefore earned the final Chase wilcard spot on a tie-break over Newman.

A loose wheel then left him two laps down and outside the top 20, before he fought back to an eighth place that was not quite sufficient for the Chase. 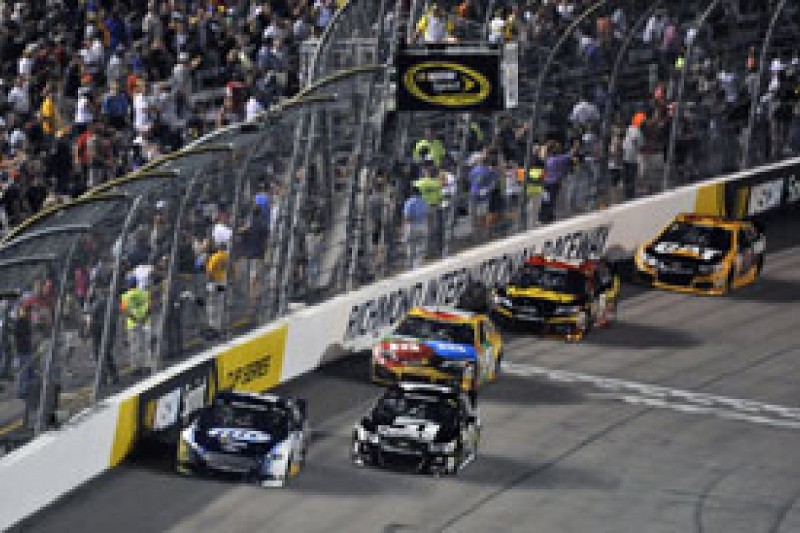 Keselowski's hopes of a successful title defence faded away as he ultimately finished only 17th.

His Penske team-mate Joey Logano was off the pace all night and finished a distant 22nd, but clung on to a Chase spot.

It was a terrible race for erstwhile outright points leader Johnson.

Having missed qualifying due to the birth of his second daughter, Johnson struggled to make any progress from the back. A pitlane speeding penalty and a battery problem delayed him further even before his tyre-induced crash.