He will go up against Kyle Busch, Martin Truex Jr and Kevin Harvick for the title at Homestead next weekend, with reigning champion Joey Logano among those eliminated at the penultimate round.

After dominating the third stage of the 312-lap event, Hamlin held a 10-second lead on Joe Gibbs Racing team-mate Busch with just a handful of laps to run when a caution was thrown due to John Hunter Nemecheck hitting the wall.

Hamlin's pace had been such that only seven cars were left on the lead lap. He led the septet into the pitlane, where his crew fitted his Toyota Camry with just left-side tyres, the #11 emerging just ahead of Ryan Blaney and Busch.

On a three-lap sprint to the line, Hamlin was untroubled as he secured JGR's 18th win in 35 Cup races in 2019, and himself passage to the finale at Homestead next Sunday - an outcome that had looked unlikely after his crash at Texas a week ago.

Polesitter Busch ran strongly throughout the race and will also advance via his points tally - his result and Truex's Martinsville win meaning JGR will have three of the four drivers in title contention, with Stewart-Haas Racing's Harvick the only interloper.

Blaney was edged out by Busch on the late restart to claim third for Team Penske's Ford Mustang with Kyle Larson the highest Chevrolet Camaro finisher in fourth for Ganassi. Both drivers had been championship contenders heading to Phoenix but were eliminated.

With their places already secure in the championship race, Harvick and Truex had quiet runs to fifth and sixth respectively, ahead of Erik Jones and Clint Bowyer. 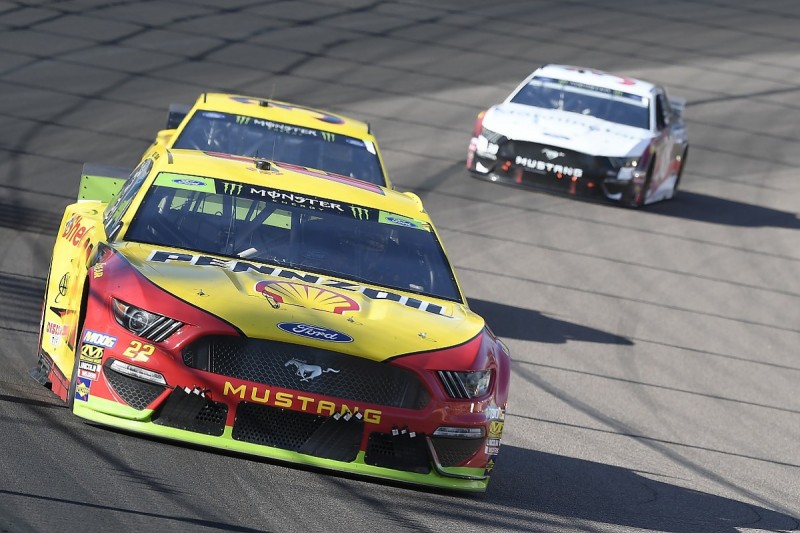 After winning the second 75-lap stage, reigning Cup champion Logano was looking good in his bid to advance through to Homestead but his race fell apart during the third stage.

The champion's #22 Mustang dropped through the pack, lacking in pace, with Logano describing his car as "tight" post-race.

Had Hamlin not won the race, then Logano would have taken his place, but the Penske driver could only manage a ninth-place finish ahead of team-mate Brad Keselowski and cannot defend his 2018 title.

Chase Elliott's slim hopes of a spot in the final title showdown were ended early on when he crashed into the barrier in his Hendrick Chevrolet.

NASCAR title showdown: Who will make the 'championship four'?