A total of 11 cars in the 40-strong entry lost their official starting position when the inspections were carried out shortly before the Saturday night race.

The penalised cars included two of the four Stewart-Haas Fords that had swept the first two rows in Friday's qualifying session.

Polesitter Kevin Harvick and third fastest qualifier Clint Bowyer passed inspection, but their team-mates Aric Almirola and Daniel Suarez - who had been second and fourth - will go to the back.

Half of the original top 10 on the grid failed to pass the technical checks. 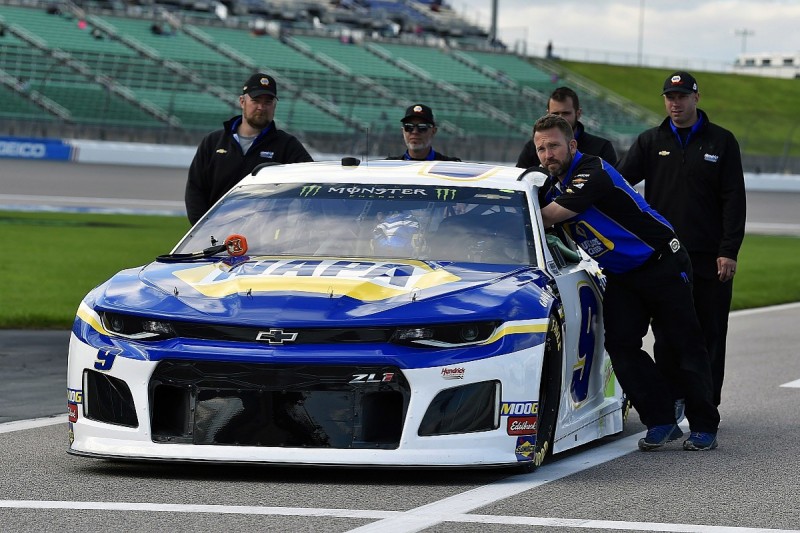 Fifth and sixth place qualifiers Chase Elliott of Hendrick Motorsports and Martin Truex Jr - winner of two of the last three races for Joe Gibbs Racing - are also being demoted, as is Ganassi driver Kyle Larson from eighth.

Elliott, Logano and Larson all failed twice before being cleared and each of them had a crew member ejected from the race as a consequence.

William Byron and Brad Keselowski move up from seventh and ninth to the second row, while row three will end up being Alex Bowman and Erik Jones - who were originally 10th and 11th after qualifying.

Under the Kansas timetable there is no technical inspection ahead of qualifying, meaning the penalty for a failed inspection is higher because the checks are not carried out until pre-race and starting positions are therefore at stake.

In regular Cup schedules, any irregularities with cars are more likely to be caught before qualifying happens.

Polesitter Harvick won this event last year, but is still searching for his first Cup victory of 2019.