The new system, which scans the car with lasers and compares information to computer-aided drawings provided by each of NASCAR's manufacturers, was trialled at four races last year.

There were controversies over potential rulebreaking during the 2017 season, including when Dale Earnhardt Jr accused teams of manipulating post-race burnouts to pass inspections.

Penske's Brad Keselowski has been critical of NASCAR's rules in light of Toyota's dominance but says the new change gives him hope Ford can be competitive.

"The biggest thing for me is seeing what happens with the Hawkeye system," he said.

"That will be the determining factor on what manufacturer is successful this year.

"If the Hawkeye system comes in working fully I think we will see a very level playing field in 2018 and we are capable of winning.

"It is inherent to the designs of the cars that some things weren't able to be policed before that were designed into other cars that, with this system, it will eliminate it."

"It will be taking out more of the human element now," Busch told Autosport.

"With the way that the LIS [laser image scanning] platform is with laser-inspection, you hope that it is the same for everybody.

"I hope it will level the playing field when it comes to tech-inspection." 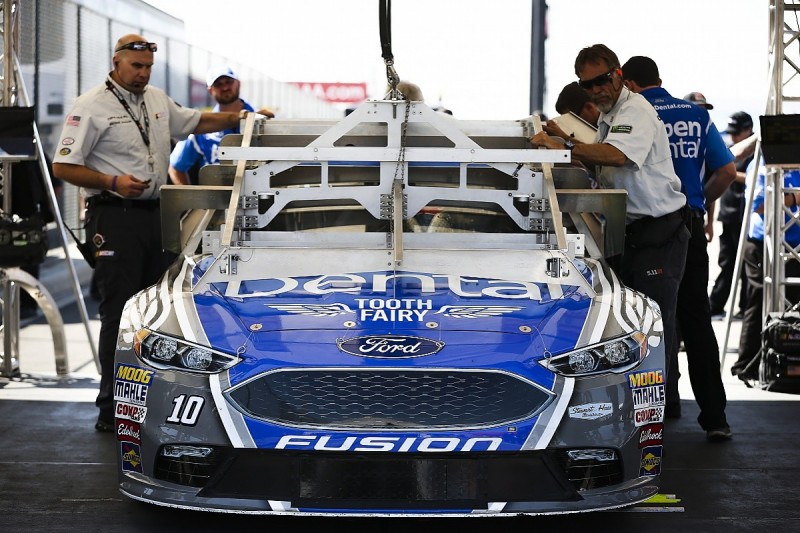 Chevrolet NASCAR manager Pat Suhy told Autosport that the old system (pictured above) allowed teams to be creative in working around the limits.

"There's a rule that says cars have to look right but they weren't inspected efficiently so you could be quite creative with how you manipulate a design of a surface," he said.

"Knowing that there's a new inspection process, that's vision-based with camera-based system stuff, some of the things we probably would have done if it was strictly the [old] grid template system we knew were directionally incorrect."

Teams can practice with the new system ahead of the 2018 season.

The over-the-wall pit crew, housing "organisational" roles such as team manager, has been cut from four to three in 2018, with a fourth person allowed for teams with three cars or more.

"To have this change now, essentially somebody has to do two roles, the systems all these teams have built into place are all changing," said Johnson.

"We've [Hendrick Motorsports] been scrambling like a lot of the other teams. It's been hard because it's changing our systems dramatically."

Pitstops are expected to take longer in 2018, especially as the refueller will not be able to perform other duties during stops.