Aric Almirola secured his place in the next round of the NASCAR Cup series playoffs with victory in overtime at Talladega, as his Stewart-Haas Racing team dominated the event

SHR locked out the top four positions for a majority of the 193-lap race, but a late race caution for contact between Alex Bowman and Erik Jones sent the race into overtime.

Long-time leader and pole-sitter Kurt Busch ran out of fuel on the final lap of the race, slipping to 14th, while Kevin Harvick slipped to 28th, the #4 also not having sufficient fuel to make the chequered flag.

Almirola, who qualified fourth, spent the race dicing with his SHR team-mates, who quickly opened a gap to the chasing pack, such was their dominance.

The #10 was fourth in stage one, won by Kurt Busch, and matched that result in the second 55-lap stage, won by Harvick.

Seemingly comfortable and having fended off the advances of the chasing pack in the closing stages, headed by Brad Keselowski, the race was turned on the contact between Bowman and Jones. 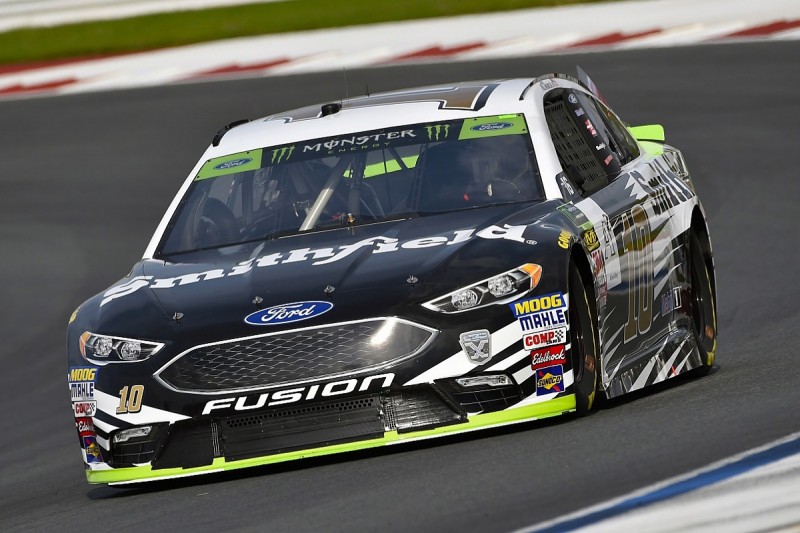 Almirola moved into the lead on the penultimate lap when Busch slowed, with Clint Bowyer securing the 1-2 for SHR, while five-time Talladega winner Ricky Stenhouse Jr. took third place for Roush Fenway Racing.

On a disappointing day for Joe Gibbs Racing, Denny Hamlin rescued fifth in the late drama, with Joey Logano sixth for Team Penske.

A.J Allmendinger was the best-placed of the Chevrolet runners, coming home in sixth place, ahead of seven-time Cup champion Jimmie Johnson, who recovered from hitting the wall early in the second stage on lap 63.

Reigning Cup champion Martin Truex, Jr suffered a bad race, but is still in with a chance of making the playoffs. The Joe Gibbs Racing driver languished toward the rear of the field throughout, but goes to Kansas next weekend, 18 points to the good over Keselowski.