Joe Gibbs Racing's Kyle Busch climbed from last on the grid to win the NASCAR Cup Series race at Richmond, booking his place in the second round of the playoffs

After he was sent to the back of the grid as a result of his team repairing damage picked up in qualifying, Busch finished stage one in 13th but had only climbed two more spots by the end of the second stage.

Exchanging the lead with Penske's Brad Keselowski on several occasions in a close duel, Busch decisively seized first with 36 laps of the 400-lap race remaining.

Keselowski's pace dropped significantly as his rear tyres lost performance in the closing laps. He slipped to ninth.

Busch's win was his sixth career victory at Richmond. He led home a 1-2-3 for NASCAR's so-called 'Big Three' drivers, ahead of Kevin Harvick and Martin Truex Jr.

Harvick was a feature among the top three throughout the race, finishing the opening two stages in second place behind Truex.

Furniture Row Racing driver Truex had led 160 of the first 200 laps, but was demoted to the back of the field when he was issued an uncontrolled tyre penalty for his end of stage two pitstop.

Dropping to 17th, Truex's gradually climbed back through the field.

His third place confirms his place in the second round of the playoffs on account of his points tally. He joins Las Vegas race-winner Keselowski and Busch as being assured a place with a race to spare. 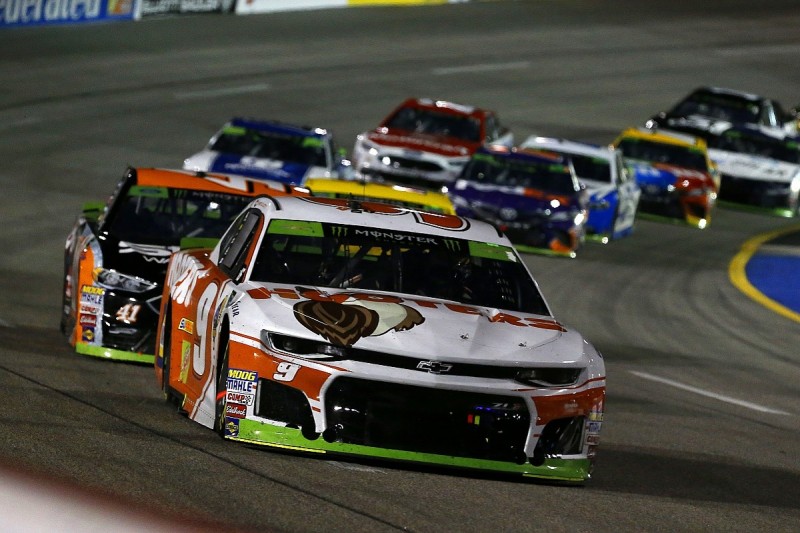 Having started in 18th place, Elliott recovered to his finishing position by the end of the opening stage.

Elliott now enters the final race of the opening playoffs round 10 points clear of the cut-off in ninth place, having started the weekend in the danger zone outside of the top 12 cars.

Aric Almirola and Austin Dillon both improved their chances of progressing further into the playoffs, finishing fifth and sixth respectively.

Ending the race in seventh and eighth, Chip Ganassi Racing driver Kyle Larson and Hendrick's Jimmie Johnson battled throughout much of the final stage of the race.

Johnson is now 14th in the playoffs standings and six points adrift of the top 12. Clint Bowyer finished the race in 10th, recovering from a difficult qualifying, ahead of Erik Jones.

Jones had dropped to 24th at the start of stage two after he was issued a stop-go penalty when his Joe Gibbs Racing team left a wedge-adjuster attached to the car upon leaving the pitbox.

Denny Hamlin suffered a half-spin in the opening stage of the race after being tagged by Ricky Stenhouse Jr.

He finished a lap down in 16th after being wrong-footed by a late race caution, having already made his final pitstop along with 18th- and 19th-place finishers Kurt Busch and Ryan Blaney.