In a race blighted by tyre failures, featuring a record breaking 16 caution periods and a red flag interruption, Hamlin got an excellent getaway at the final restart to secure the victory in overtime.

The Joe Gibbs Racing driver started from pole and led 189 of the 400 laps while Truex led 193.

It was the Furniture Row driver who initially looked the strong bet for victory but a slow stop and a speeding penalty meant last weekend's race winner Truex ran out of time to complete his fightback.

He slipped back at the final restart to finish third behind Ganassi's Kyle Larson who recovered from a lap down midway through after a slow pitstop.

Penske's Brad Keselowski finished fourth after an aggressive restart paid dividends and Kevin Harvick rounded out the top five after coming back from a speeding penalty.

The final Chase spots were also decided with Jamie McMurray, Austin Dillon and Chase Elliott securing their places in the championship playoff after finishing seventh, 13th and 19th respectively.

Chris Buescher came home 24th to finish inside the required top 30 in points at the cut-off, securing his place in the Chase thanks to his surprise Pocono victory.

Chase hopeful Ryan Blaney was too aggressive in the opening stages and crashed into the wall early on and into retirement.

Kasey Kahne was in the top ten throughout the race and did stage a late fight for the win at the final restart but he slipped back to sixth. 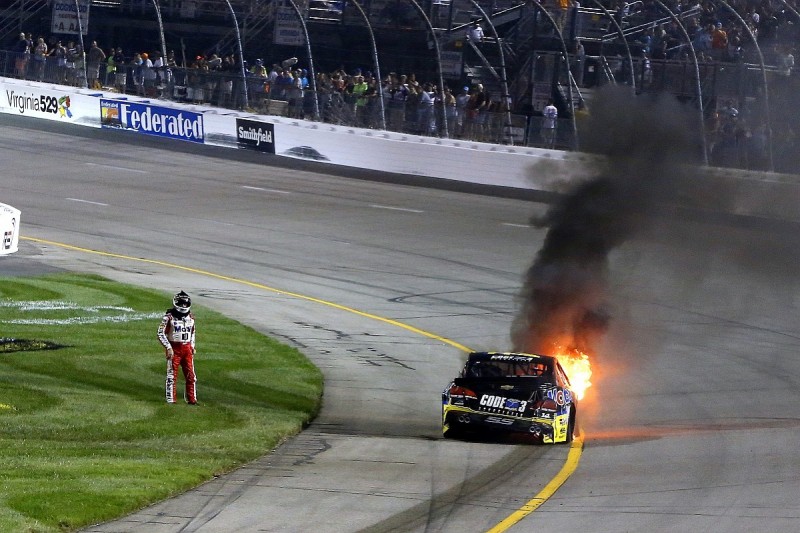 The red flag stoppage was caused by a huge shunt involving seven drivers late on.

Following a restart, Ryan Newman and Tony Stewart got together and collected Carl Edwards as all three ran into the inside wall, ultimately ending Newman's hopes of making the Chase.

They spun back across the track and David Ragan, Brian Scott, AJ Allmendinger and Dylan Lupton were all unable to avoid hitting the trio.

Buescher was also involved but he luckily managed to squeeze through the wreckage.

The first race of the Chase's challenger round takes place next week at Chicago.

NASCAR Sprint Cup Chase: Who can and can't make it at Richmond