A caution for a brief rain shower with 17 laps of the scheduled 70 around the 3.6-mile circuit closed the field up, with the leaders pitting for fresh slick tyres as opposed to switching to the grooved wet Goodyear rubber.

Bell, in his second race for Joe Gibbs Racing, was running well inside the top 10 and, following another quick caution for a brief fire on Tyler Reddick's car after an excursion, took the final restart in eighth place.

Having made his way up to third behind Penske's Logano and Chip Ganassi driver Kurt Busch, Bell sustained damage following contact with Busch which allowed Logano to extend his lead to about four seconds.

Once Bell cleared Busch, he set about chasing down Logano, who had assumed the lead by virtue of staying out under the rain caution on the 53rd tour, having changed tyres just two laps prior.

The two leaders then streaked clear, with Bell gradually whittling Logano's lead down to striking distance on the penultimate tour. Bell then drove around the outside of Logano at the front-stretch chicane, located on the exit of the oval's Turn 4, and eased away to claim his first at Cup level by 2.119s. 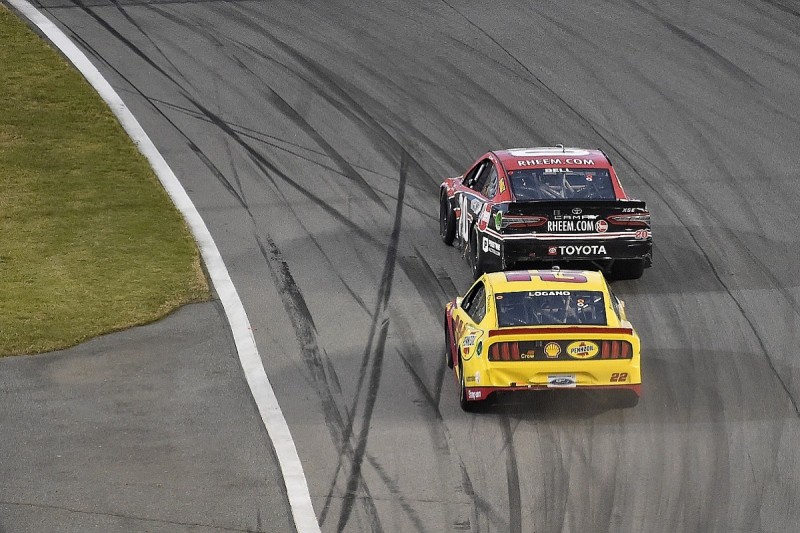 Logano, who admitted Penske's long-run pace is slightly behind the Gibbs and Hendrick cars, was second and comfortably ahead of stage two winner Denny Hamlin who faded with brake problems affecting his JGR Toyota.

Like many of the established front-runners, Hamlin found himself outside of the top 10 on the final restart but fought his way through to record a Gibbs 1-3 on the weekend the squad also took victory with team boss Joe Gibbs' grandson Ty on his debut in the Xfinity support series.

He led home Busch, who drove well to recover after spinning out at Turn 4 in the infield whilst leading, vaulting up the order from the midfield by opting to stay out during the rain caution.

Brad Keselowski endured a tricky afternoon for Penske, which included a severe lock-up at the bus-stop on the back-stretch early on and a self-induced spin at Turn 1 on lap 41.

Like Logano and Busch, his race was transformed by not pitting for fresh tyres after the rain had passed, which allowed him to salvage fifth.

Stewart-Haas racer Kevin Harvick took a low-key sixth, ahead of AJ Allmendinger, racing in Cup for the first time since the 2018 finale at Homestead for the small Kaulig Racing outfit.

Daytona 500 winner Michael McDowell suffered a flat tyre on the first lap which dropped him to the rear. Unlike others who banked top 10 results, McDowell's Front Row Motorsports team did bring him to pitroad after the rain shower, but he used the fresh rubber to climb his Ford Mustang into the top 10 to take eighth.

Ryan Preece followed up sixth in last week's season-opening Daytona 500 with ninth for JTG Daugherty, as Hendrick's Alex Bowman rounded out the top 10.

Reigning champion Chase Elliott, who had won the previous four road course events in Cup dominated the early stages of the race, claiming victory in the first 16-lap segment. 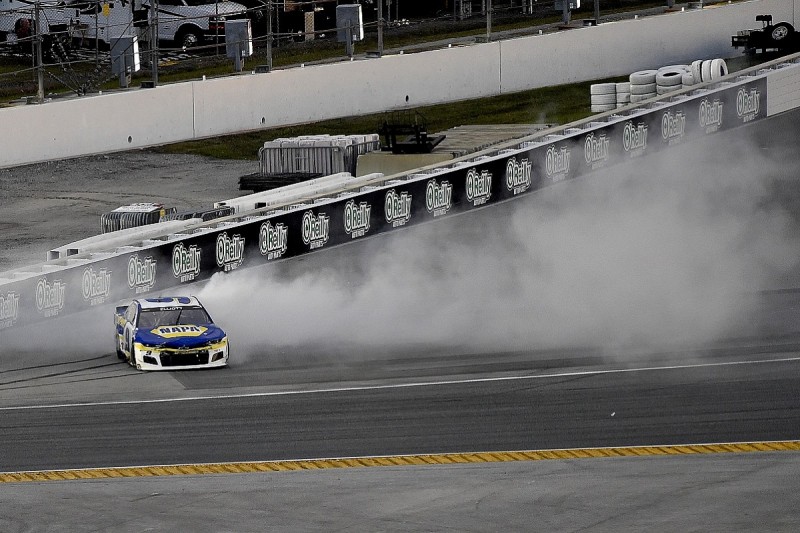 The Hendrick driver lead until the rain caution, but slow work on pitroad by his crew dropped him to 11th on the road.

On the restart, Elliott was nudged wide through the infield by Corey Lajoie, doing well to maintain control of the car as he ran across the grass.

He was attacking Keselowski on the 64th lap as he climbed back through the top 10 when Hamlin tagged Elliott's Camaro into a spin, which dropped him down the order to 21st at the flag.

Kyle Busch, who won the pre-season exhibition race on the road course, endured a mixed afternoon for Gibbs that started with severe damage on the opening tour after being pushed wide. Following a pitstop for repairs, he steadily rose through the pack to run as high as third on the 52nd lap.

But his race never recovered from dropping back in the midfield after stopping, and Busch eventually fell away to a lapped 35th after tangling with backmarkers.

Kyle Larson was in the picture for a top five result, before spinning at Turn 6 trying to pass Kurt Busch on the inside on lap 63, dropping to 30th at the flag.