The six-time champion took the lead with 40 laps remaining after a daring pitstop from third place, which undercut long-term leader Kevin Harvick and gave him a 14-second lead.

Harvick closed him in when Ryan Newman's tyre failure brought out a caution with three laps to go, assuring the race would end in overtime.

But Dale Earnhardt Jr moved past the Stewart-Haas driver at the restart to claim second, 0.06s behind Johnson, while Kyle Busch completed the top three in a thrilling finish.

Johnson sat third for a large part of the race, behind Harvick and Martin Truex Jr, and took a gamble by pitting earlier for fresh tyres on lap 276 of 330.

He timed it to perfection as Harvick stopped nine laps later and fell a long way back, allowing the Hendrick Motorsports star to maintain a comfortable lead.

In overtime, he held off the fast-starting Busch, and then Earnhardt Jr, to claim back-to-back wins at Atlanta.

Busch will perhaps be as happy as Johnson, after he fought his way through the field from last on the grid.

But Kyle kept his nose clean throughout the race to claim an impressive top-three finish, ahead of his brother and Carl Edwards.

Kurt led the race for most of the first 64 laps, before losing it to Matt Kenseth - who had made his way forward from 13th on the grid.

But a penalty for improper fuelling ended his hopes of making it to victory lane.

From there, Harvick and Truex took up the charge before Johnson leapfrogged them both through the pits.

Harvick slumped to sixth in overtime, while Truex had to settle for seventh - a week after he lost out to Denny Hamlin and finished second in the Daytona 500. 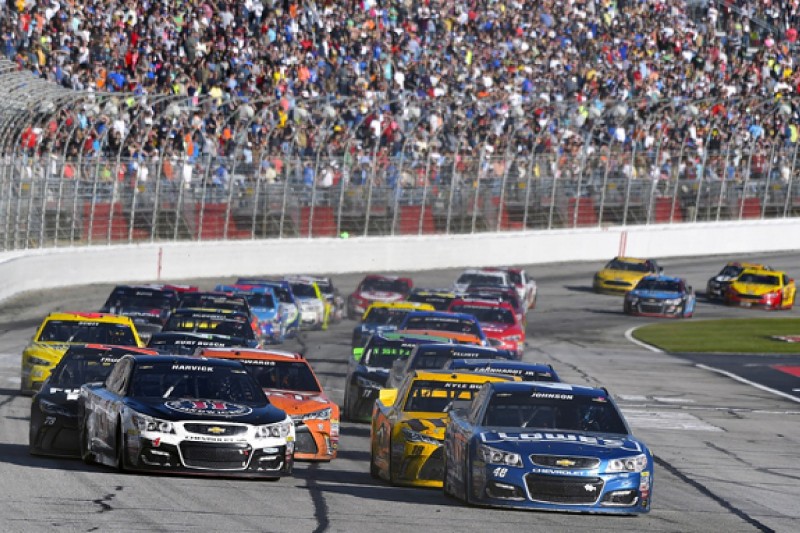 Stewart-Haas NASCAR team switches from Chevrolet to Ford for 2017