Kentucky NASCAR Cup Series winner Kurt Busch says he was "proud" of his brother, Kyle, for their fight for victory last weekend in which the two made contact 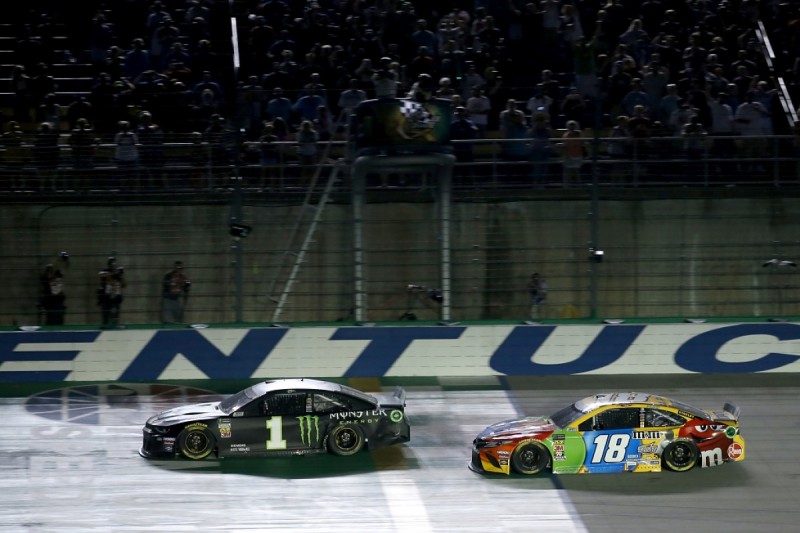 Chip Ganassi Chevrolet driver Kurt Busch had fresher tyres and drove around the outside of Logano after the restart, and went side by side with his younger brother over the final lap - Kyle clipping the rear left of Kurt's car on the outside.

"You know, racing your little brother every week and watching him win a lot, I'm proud of him, but I'm proud of him he gave me a little bit of room on that outside," said Kurt Busch after the race.

"He could have clobbered us against the wall, and third place probably would have got it.

"What an awesome run.Thank you, Kentucky!

"He [Kyle] gave me just enough room, as a true racer would or as my little brother would.

"But I'm really proud of the way that we finished this race one-two, put on one hell of a show, one of those old-school type races where it's two guys duking it out.

"But this one, I can't wait to go watch the video of and tell people about it and show the sport of NASCAR and the production and the pride that everybody has to try to get to victory lane was shown in those last few laps.

Joe Gibbs Racing's Kyle Busch, who is six years younger than the 40-year-old Kurt, said there were "no hard feelings" after the duel.

"I'm glad it was a thriller. Just unfortunately we were on the wrong end of the deal for everybody at M&M's and Toyota, Interstate Batteries, all the folks that get us to where we're at," he said.

"But congratulations to Kurt and Chip and Monster and all the guys over there.

"It's obviously cool to put on great races and great finishes, and been a part of a lot of them and not very many - in fact none with my brother like that, so that was a first."

Key to Busch's late charge was a bump from team-mate Kyle Larsen on the last restart.

Larsen added: "I was going to be committed to Kurt's back bumper no matter how much of a run I had because I knew I couldn't get to the lead from the third row.

"So, if I could help a teammate out, I was happy with that.

"They have been really strong all year long. They should have won last week (Daytona), so it's nice for them to get some redemption today."