Hendrick Motorsports' Kasey Kahne has won a crash-filled Indianapolis NASCAR Cup race in twilight conditions, which was delayed three times due to weather and multi-car incidents

Joe Gibbs Racing's Kyle Busch dominated for much of the 167-lap race, extended from 160 due to the overtime, which was red flagged for almost two hours due to a passing thunderstorm. He led a total of 87 laps.

But both Busch and second-placed Martin Truex Jr's days came to a premature end on lap 111 immediately after a restart, when Truex lost control of his Toyota Camry at Turn 1 and took Busch out with him. Truex's car was engulfed in flames as a result.

This turned much of the final stage into a strategy game before the late carnage.

The second red flag came out with 10 laps to go, and was due to a large amount of debris on the front straight from the aftermath of a crash involving Clint Bowyer, Kurt Busch, Jamie McMurray and Erik Jones.

Rookie Jones was having a strong run, leading 10 laps after working his way to the front due to strategy during the second stage.

Kahne had already pitted at this point - just before the pits closed - and with most other drivers stopping after the red flag, it allowed him to jump to the front of the pack.

He then passed Brad Keselowski on the 13th and final restart and crossed the line before the caution came out for one of many multi-car incidents. Ryan Newman was third. 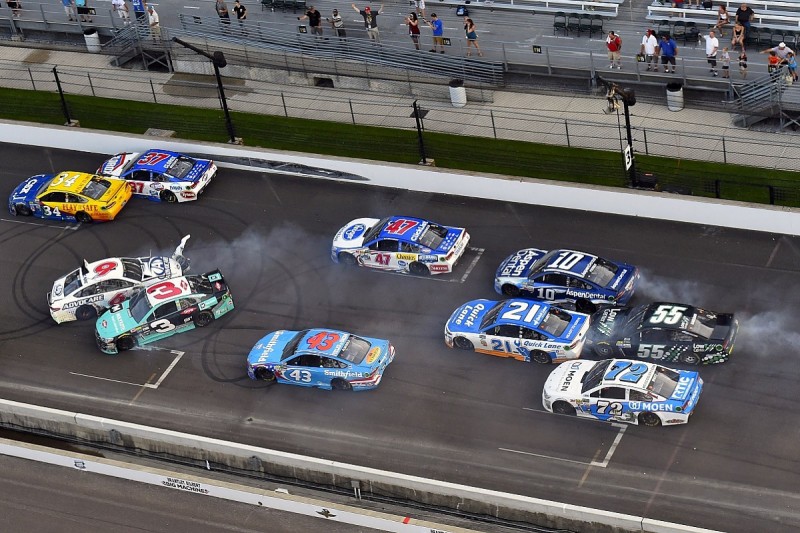 The third and final red flag came following an eight-car pileup on the front stretch during an overtime restart involving Trevor Bayne, Austin Dillon, Denny Hamlin and Aric Almirola. Bayne was running a strong third at the time of the collision.

Jimmie Johnson, who started towards the back of the field following a gear problem on his car, had worked his way up to the very front before crashing out while fighting three-wide for the lead with Kahne and Keselowski.

Polesitter Kyle Busch took the first stage win despite late pressure from points leader Martin Truex Jr, and took the second stage win with a brilliant climb from ninth after a number of cars did not pit following an incident involving JJ Yeley.

But Busch's crash means that he is now on his longest winless streak in his illustrious career, and is still yet to secure a playoff spot this year.

Dale Earnhardt Jr's final appearance at the Indianapolis Motor Speedway ended prematurely following a collision after a restart at around the half-way point of the race.