Byron, who has not raced in NASCAR's top tier, will replace the outgoing Kasey Kahne, after a deal was formally announced by Hendrick on Wednesday.

He will complete the team's four-car line-up alongside Jimmie Johnson, Chase Elliott and Alex Bowman, who will take over the seat vacated by Dale Earnhardt Jr when the veteran retires.

Hendrick said Byron's rise through NASCAR's second- and third-tier Xfinity and Truck series convinced him to take a chance on the teenager.

Byron was in contention for the Truck title last year before an engine failure in the penultimate race ended his chances, and he is currently second in the Xfinity standings this season with three wins.

"The thing that impressed me so much with William was his ability to win so many races in the truck series — becoming the youngest guy to win," said Hendrick.

"Then you look at the job he's done in Xfinity this year, becoming the youngest winner at Indy, how he goes to the front so quick, how he picks up on things.

"He's fast and that speaks volumes for his talent in the car."

Hedrick, who signed Byron last year during his Truck campaign, said that commitment had marked the 19-year-old out as a talent.

"[In] his last year as a senior at Country Day, he won the K&N Series, he was an honour student, was taking college courses and he became an eagle scout," said Hendrick.

"When you do all that and fit it into here and excel in every area, that takes tremendous commitment, drive and determination.

"We've seen he's got the talent, but his character is unbelievable. He's very, very bright.

"He's spends all his time studying or iRacing or in a simulator or a race car.

"His rapid rate of success has blown us all away."

Hendrick has not ruled out the possibility of giving Byron additional seat time in a Cup car later this year. 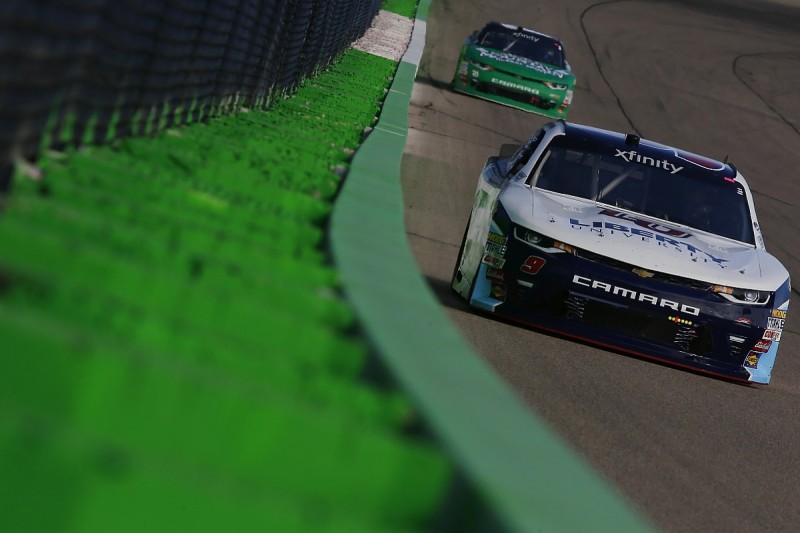 Byron insisted he was not intimidated about stepping up to the main series.

"It's going to be a test and you're going to have to match that intensity," Byron said.

"I've got a real a golden opportunity here at Hendrick Motorsports.

"It's going to be challenging at times. But I know that and I'm prepared for that."

Kahne's future is less clear, after Hendrick dropped the 37-year-old with a year remaining on his contract.

He could find salvation in the form of GMS Racing, but that is dependant on the outfit moving up to the Cup series next year.

GMS has helds talks regarding a technical alliance with Hendrick for 2018.