Harvick and Hamlin emerged as the contenders for victory at Loudon, after a late caution neutralised the field.

In the closing laps the pair touched, including on the last lap, but Stewart-Haas Racing's Harvick came out on top after electing not to pit for tyres late on.

Hamlin said on the radio "I knew what I should have done but I didn't want to take him out".

When asked what he should have done, he said: "Well, I kind of shoved him up a little higher and tried to get him out of the groove.

"I just wanted to just tap him there, but I didn't want to completely screw him.

"I at least wanted to give him a fair shot there. 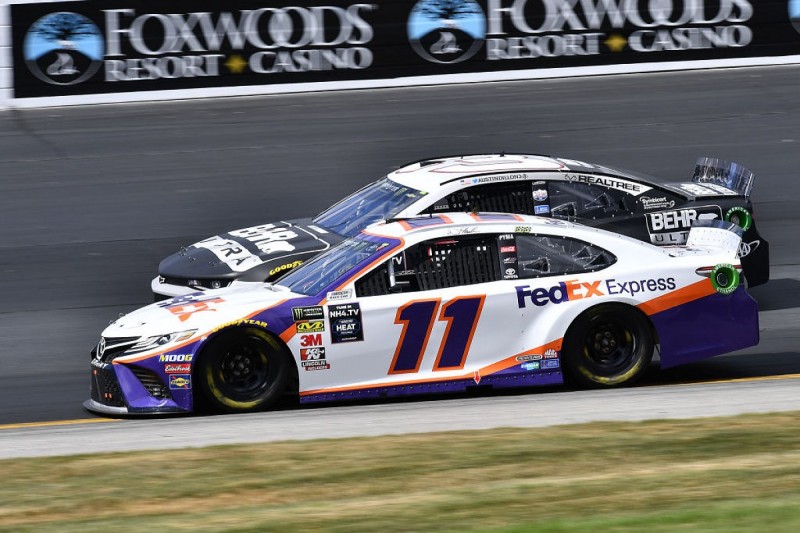 "Down the backstretch, I kind of let off, and I'm like, all right, well, I'll just pass him on the outside and kind of do this thing the right way, and once I had that big run, he just turned right.

"But I would do the same thing.

"It was a fun race, and congratulations to him and his team.

"They made a great call there at the end."

It was Harvick's first win since November 2018 and the four-car squad's first of the season.

Harvick said he wasn't sure the call not to pit at the end was the correct one, but that he was ultimately happy he had listened to his team.

"I didn't think we had the best chance to win staying out, but Rodney and those guys made a great call with our car here," said Harvick.

"We had a good car all day, we just never could get track position and stayed out there, ran a lot of good laps.

"I didn't want to see traffic there at the end.

"It really made my car tight, and he got to me.

"He tried to move me out of the way down there, and I knew that was coming as close as he was.
"So I just stood on the brakes and I'm like, half throttle down the back straightaway.

"I'm like, 'you're not getting under me again', and he drove to the outside of me, and I waited until he got near me, and I just put a wheel on him."