Chase Elliott made the most of a slick pit strategy to score his NASCAR Cup Series victory of season in a rain-shortened crash-strewn race at the Circuit of the Americas.

Elliott and his Hendrick Motorsports team went for a splash and dash stop near the beginning of the final stage and were likely to end up two laps short on fuel to make it to the finish.

Fortunately for the reigning Cup champion, heavy rain brought out the second red-flag of the race and NASCAR called its first race at the US Grand Prix Formula 1 venue complete after just 54 of the scheduled 68 laps.

Had the race remained green, Elliott would either have likely run out of fuel or been forced to pit under green for at least a splash of fuel and give up the lead.

The win was his first of the year, ensuring all four HMS drivers have now secured at least one win this season.

"I'm just super-proud of mine and their ability to continue to fight. When we started we weren't very good. I just kept pushing myself and we kept making changes throughout the day where I thought we were on pace with the other guys at the end.

"I'm looking forward to next week and trying to make it continue."

Asked about being short on fuel if the race went the distance, Elliott said, "I just kept pushing myself harder harder. There were some areas on the track that were very treacherous I felt like. The backstretch was puddling up and we were started to hydroplane and some other weird stuff.

"My only option was to just kind of send it through those spots and just hope for the best." 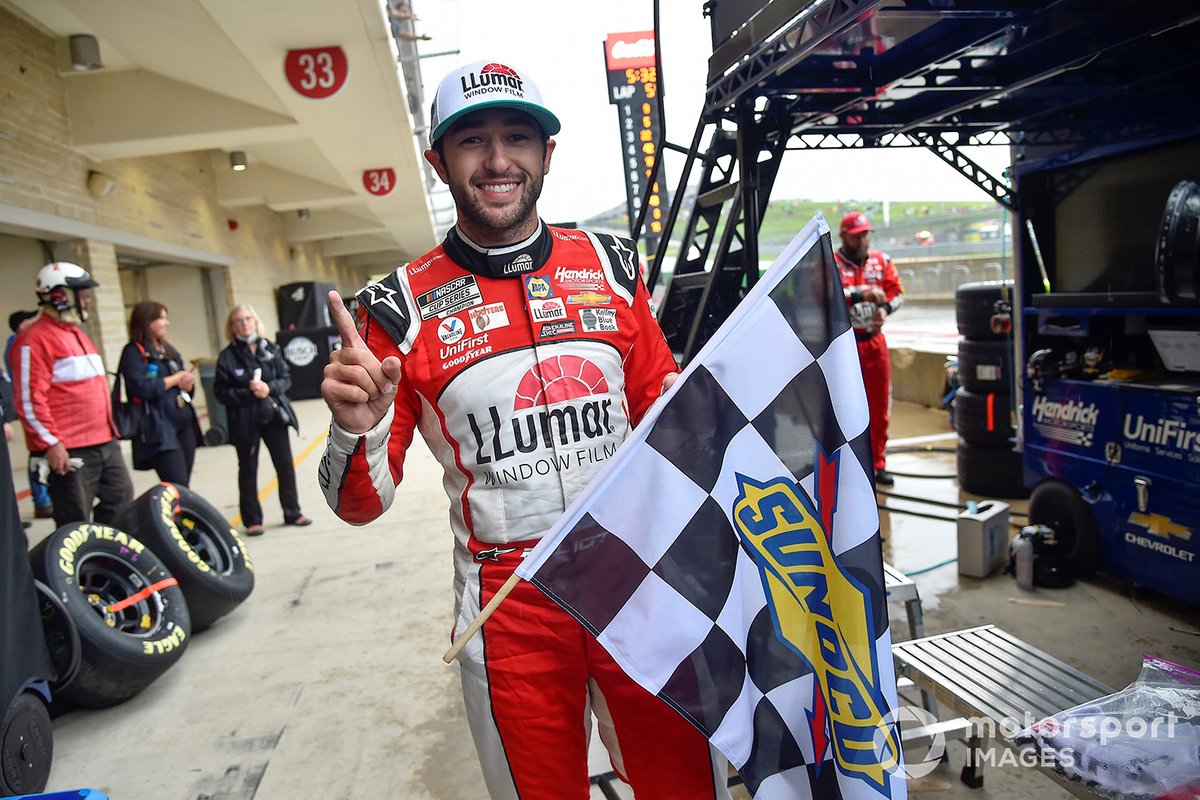 In 14 career road course starts in the Cup series, Elliott has now won six of them, including five of the past six.

With the win, Hendrick Motorsports has now matched Petty Enterprises on the all-time wins list in the Cup series with 268 victories.

The race was filled with plenty of incident triggered by rain and poor visibility.

On lap 17 of the race, Christopher Bell ran into the back of Ryan Blaney and spun out.

Kevin Harvick slowed down to avoid the incident but an unsighted Bubba Wallace continued unawares and ploughed into the back of Harvick's car, destroying both machines.

Just a few laps later, Martin Truex Jr ran into the back of Michael McDowell and sustained significant front-end damage. Cole Custer then slammed into the back of the Joe Gibbs Racing driver, sending Truex's car airborne, while Custer's ignited into flames after a secondary impact with the barrier lining the straight.

Both were fortunately able to climb from their cars, unhurt, as the red flags arrived.