The accident occurred as the cars crossed the finish line, with Austin Dillon's Richard Childress Chevrolet launched into the catch-fencing and flipping over before landing back on track upside down with its front and rear ends ripped away.

Dillon walked away unscathed, but NASCAR said five fans in the grandstands were being treated for minor injuries having been hit by debris, with one taken to hospital. Another eight were examined by circuit medics but declined treatment.

The event had been scheduled to start on Sunday night at 7.45pm local time and was delayed by four hours due to constant rain before finally finishing in the early hours of Monday morning.

Earnhardt commanded the majority of the race, as he led 95 of the 160 laps to take his second victory of the season, the other having also come in a restrictor-plate race at Talladega in May.

Earnhardt had controlled the race in the early stages, which included David Gilliland sparking a a multi-car pile-up as early as lap three in which Daytona 500 winner Joey Logano's Penske Ford sustained severe damage.

After Earnhardt and Johnson exchanged the lead continuously until halfway, Earnhardt tumbled down the order during the fifth caution of the race on lap 87 of 160, as a slow pitstop dropped him to 10th.

That allowed Johnson to assume the lead, but Earnhardt patiently made his way back through and was in front again within 16 laps.

The safety car was called minutes later as Matt Kenseth lost control of his car and hit Kyle Larson, causing both men to spin and trigger the race's second big crash.

Last year's July Daytona winner, Aric Almirola, was a victim of the incident as he suffered damage and was forced into retirement, along with Furniture Row's Martin Truex Jr.

Earnhardt made his final pitstop during that caution, and from there he kept his cool and led all the way to the finish, taking the flag clear of the chaos that enveloped many of those classified in the top 10. 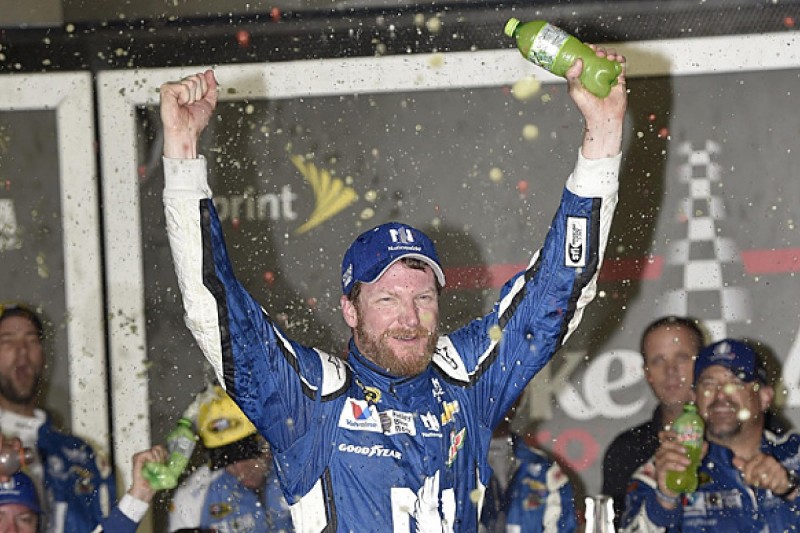 * Kyle Busch needs to get into the top 30 in points to take up a Chase place, despite Sonoma win