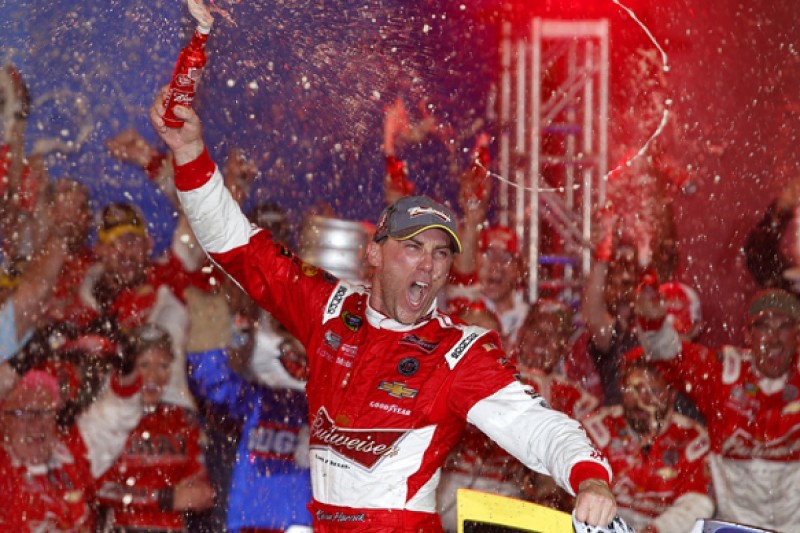 Prior to Saturday night's 500-mile event, Harvick had not won since Darlington in April - despite regularly leading and even dominating many races only to hit misfortune.

It finally came right for the Stewart-Haas driver at Charlotte Motor Speedway as he led 162 of the 334 laps, pulling out commanding leads whenever at the front.

A mid-race fear of a loose wheel proved unfounded, and a two-lap sprint to the finish after a last-gasp yellow for Brian Vickers' Toyota blowing an engine was no problem for Harvick, who held off Jeff Gordon to the flag.

There was chaos post-race as Brad Keselowski made contact with both Denny Hamlin and Matt Kenseth on the slowing-down lap in retaliation for earlier on-track incidents.

Keselowski also ran into Tony Stewart by accident while aiming for Kenseth on pitlane, prompting Stewart to reverse into the Penske Ford.

Those disputes continued into the garage area, with separate brawls in quick succession featuring first Hamlin and Keselowski, then Keselowski and Kenseth, as crowds of crew members and NASCAR officials tried to restrain those involved.

SPARKS FLY BETWEEN KENSETH AND KESELOWSKI

Keselowski had only finished 16th and, having already been in trouble in the points after his Kansas problems, he is now effectively relying on a win at Talladega next week to remain in the Chase.

After struggling for speed all night, Johnson made it as far as fourth but pitted for fresh tyres under the final caution, clearly expecting others to do likewise. With all the other frontrunners staying out and only two laps after the restart to regain ground, he ended up 17th.

Earnhardt had to make multiple pitstops, incurring several penalties along the way, to try to fix a broken gearshift lever and finished 20th, one place beind Kenseth.

Kenseth, Keselowski, Johnson and Earnhardt are currently the quartet in line to be eliminated after Talladega.

Joey Logano, already secure in the next round after his Kansas win, was fourth ahead of pole-winner Kyle Busch.