Byron, Johnson and Matt DiBenedetto, the three drivers on the bubble in the fight to get into the Round of 16 as the field arrived at Daytona, all managed to avoid the first of three multi-car incidents in the closing stages of the race.

Tyler Reddick, who needed a victory to secure his place in the playoffs, had only just taken the race lead when he drifted into the fence trying to block Kyle Busch.

The incident prompted contact between Busch and Erik Jones, and the pair collected multiple cars as they were spun around.

Involved in the incident was Austin Dillon, who had climbed up from the back of the grid after inspection failures, and Ryan Newman, who was involved in a serious accident at the circuit in the Daytona 500.

Denny Hamlin led on the restart and it quickly became a familiar battle for the lead as Joey Logano climbed up to second.

Logano's car looked loose and, when Bubba Wallace tried to pass around the outside, the Team Penske racer couldn't hold on and drifted backwards.

He was spun around as he made contact with DiBenedetto and collected multiple drivers. 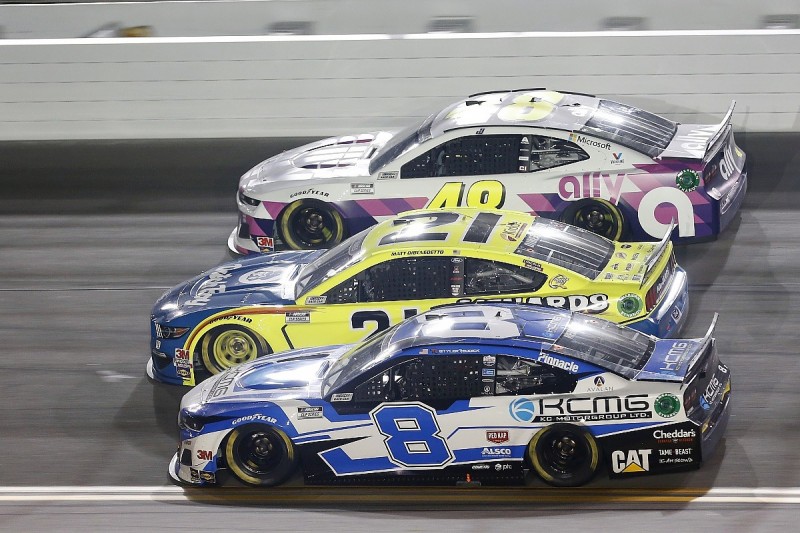 DiBenedetto was able to continue running, but Johnson suffered heavy damage to the front of his car and dropped back down the order.

Byron had managed to avoid most of the drama and snatched the race lead just as the accident unfolded behind him.

As the race went into overtime, Byron battled with Martin Truex Jr for the race lead.

Further down the order, another incident, this time six cars, disrupted the order on the final lap, but the track stayed green, allowing Byron to come home to take his first win from 98 race starts.

Truex dropped back to fourth on the final lap as Chase Elliott took second and Hamlin completed the top three.

DiBenedetto was running fifth at the final restart but was involved in the last lap incident and dropped down to 12th. He was able to take the chequered flag, though, and finished ahead of Johnson. The result secured his position in the round of 16.

Wallace took fifth, his best result of the season, ahead of Ryan Blaney and Alex Bowman.

Harvick heads into the playoffs with a 10 point advantage over Hamlin, with Keselowski a further 18 points back.