With the final places in the playoffs still to be decided heading into Saturday's final regular season round at Daytona, Johnson finished fifth in both of the opening two stages, but was taken out in a late-race pileup that limited him to 17th place in the final reckoning.

That wasn't enough for the Hendrick Motorsport driver to progress to the playoffs, with team-mate William Byron taking his maiden Cup Series victory while the Wood Brothers Racing Ford of Matt DiBenedetto finished 12th to deny Johnson for the 16th and final playoff spot by just six points.

Johnson, who also missed the playoffs in 2019, missed the Brickyard 400 after testing positive for COVID-19 and was also disqualified from finishing second at the Coca Cole 600, scoring zero points in both races.

"We had a really good car," lamented Johnson, who was blameless in the crash instigated when Joey Logano suffered a cut tyre and spun into Matt Kenseth, who in turn hit Johnson.

"The last couple of months, we've been really getting our act together and running well.

"[I'm] definitely disappointed to not be in the playoffs - that was the number one goal to start the year. 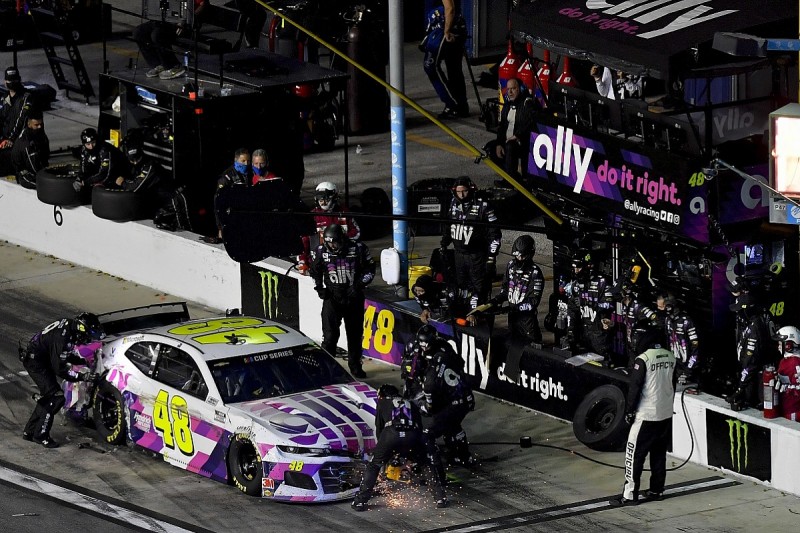 "But when I look back at the disqualification at Charlotte and then missing the Brickyard 400 due to my COVID-19 positive test and only miss it by six points - we did all that we could this year.

"I'm so thankful for Hendrick Motorsports and the career that I've had there, the relationship with [sponsor] Ally and their continued support for this race team.

"Cliff Daniels and these guys on my team - they pour their guts out for me.

"There's 10 races left, 10 trophies to go chase and we'll have to focus our efforts there."

Johnson, who recently tested an Indycar with Chip Ganassi Racing at Indianapolis and signalled his intention to race other categories after curtailing his NASCAR career, posted a simple message on Twitter following the race: "I'm down but not out. Bring on Darlington!"