NASCAR has completed a two-day test at Daytona International Speedway with its Next Gen car earlier this week, focusing on hitting speed targets.

Only one car - with Ford driver Chris Buescher - took part in the test and spent much of the two days making single-car runs around the 2.5-mile oval.

"Daytona was an important test for us, because when we come back here in 2022 we have to make sure we hit the speed targets that we're looking for," said John Probst, NASCAR's senior vice president of racing innovation.

"We came here with one car, obviously we would like to come here with 15 or 20, but we just don't have that many right now.

"So, we played with a lot of horsepower levels and drag levels to hit our target speed, which we were able to do pretty easily.

"We did that early in day one. Then spent the rest of the test trying some new things on steering and also doing some ride-height sweeps just to get some sensitivities in the car to ride height."

The new car design was originally set to debut in the Cup Series in 2021 but the COVID-19 pandemic has delayed its use until the 2022 season.

Probst said some of what NASCAR tested at Daytona may be transferrable to other tracks. 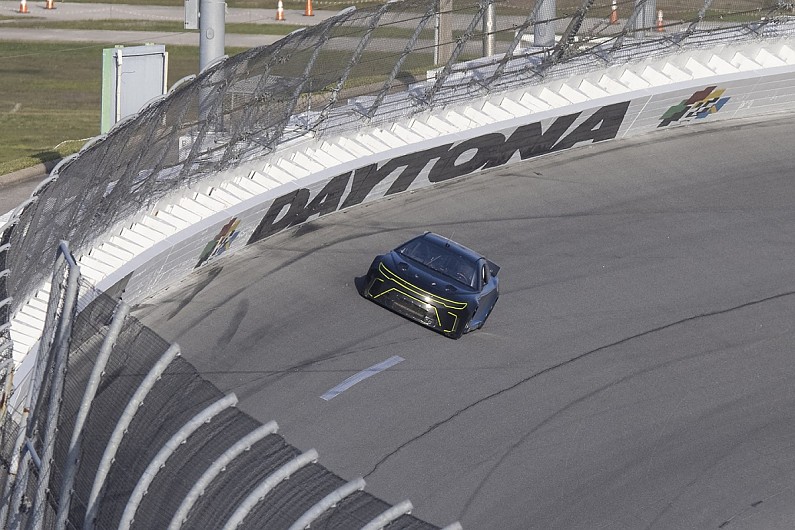 "I think some of the stuff we found in the car is very promising for some of the other tracks we're going to take it to," he said.

"So if anything, we may try to get on a local track up in the Charlotte area for a couple hours to verify what we found here translates to some other track types."

Buescher said he enjoyed the opportunity to drive the new car and experience some of its features, such as sequential shifting and different brakes.

"For starters, the speed, we went through a lot of different changes to try to dial in what we know and get closer on what we don't know - to try to have a competitive race and still do it within a reasonable speed," he said.

"Just worked through a couple little nuance things that are just a lot different and, honestly, it's a little bit of just mind over matter as far as shifting, trying to make sure you keep pulling backwards for the sequential stuff, which was really neat.

"I really enjoyed using it and got better as it went, learning what it can and can't do there by the end.

"The brakes are terrific and I know this isn't even a short-track set-up, but they stop extremely well.

"There's not going to be any issues getting to pit road and not having the stopping power, just going to be a matter of not spinning out."

Probst said NASCAR is working with manufacturers on developing a testing schedule for 2021 and plans to have three or four tyre tests in the first half of 2021 with Goodyear.

Last month, Probst revealed that former champions Kurt Busch and Martin Truex Jr said the car felt better on the road layout at Charlotte than when testing it on the venue's oval.