Harvick, who had swept all three stages to claim victory in overtime in Saturday's first 161-lap race at the 2.0-mile Michigan oval, started in 18th place after NASCAR flipped the top 20 finishers and quickly worked his way through the field to claim eighth at the end of stage one.

Swift pit-work from his #4 Stewart-Haas Racing crew vaulted the Ford Mustang up the order to restart in second place, behind Kyle Busch, who was quickly passed as Harvick went about asserting his dominance over the 156-lap encounter.

Untroubled, he swept to stage two victory, and was as equally calm in the lead until a lap 96 caution closed the field up after Brad Keselowski got loose, wiping himself and Penske team-mate Ryan Blaney out of the running - leaving Harvick and Hamlin leading the race.

Aric Almirola briefly got amongst the leaders thanks to a miscommunication with his #10 SHR crew about pitting, leaving him off-sequence having last stopped under the stage two/three break caution and needing fuel.

A brief Christopher Bell caution later, Harvick and Hamlin began to pull away from the field - lead by Martin Truex Jr, as the duo engaged for the win.

Hamlin's #11 Joe Gibbs Toyota Camry machine closed up to within two tenths of Harvick, but the triple Daytona 500 winner was unable to find a way past 2014 Cup champion Harvick - the #4 holding on for his sixth win of the season by 0.093s. 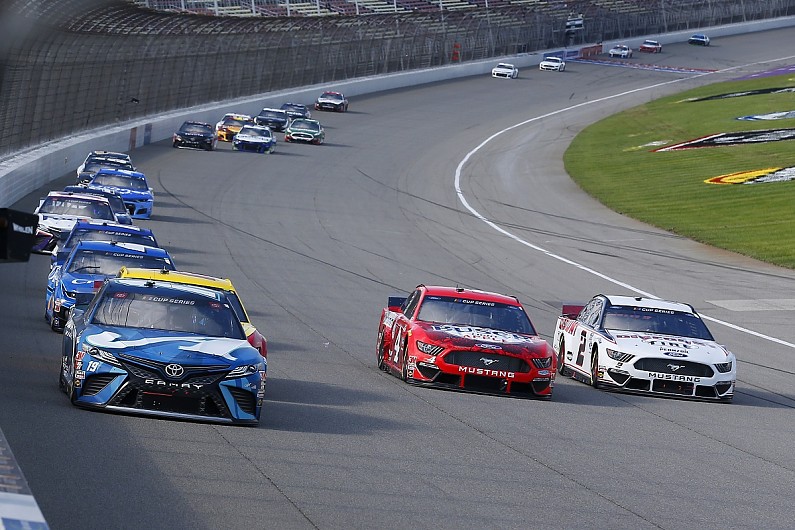 Truex Jr took a fine third for JGR - the fourth race in succession the #19 has finished in that position as team-mate Kyle Busch rounded off a clean weekend with fourth to go accompany his fifth-place finish in Saturday's race, meaning Gibbs cars rounded out the top four.

Joey Logano took his sixth top five result of the campaign, salvaging a crumb of respectability for Penske, with fifth in Ford's backyard as Almirola and Matt DiBenedetto - who stopped at the same time as Almirola under the Bell caution - made it four Mustangs in the top seven.

The lead Chevrolet Camaro finisher was that of Austin Dillon in eighth - after started from the rear after using his back-up Richard Childress Racing machine as Elliott (Hendrick) and Kurt Busch (Chip Ganassi) rounded out the top 10, with Jimmie Johnson just missing out in 11th.

Clint Bowyer started from pole position after Chris Buescher was stripped of his reverse grid pole and swept to a comfortable stage one win.

The #14 SHR quickly began to fall back thereafter however, coming home 14th - although he did prevent Harvick from sweeping all six stages across the two races with his efforts in the first 40-lap segment.