Kevin Harvick won the Brickyard 400 after a spectacular crash for Denny Hamlin in the closing stages of the NASCAR Cup Series race at Indianapolis.

The race was red flagged early on after a multi-car pile up in the pitlane, which left one of Ryan Blaney's Team Penske pit crew injured.

Blaney's rear tire changer, Zach Price, was identified by the team as the injured member and was transported by ambulance to the infield care center. He was awake and alert at the time and gave a "thumbs up" signal.

Blaney was able to continue and kept up the strong pace through the first half of the race but hit the wall in the closing stages of the second stage.

Caught up in the incident was Justin Allgaier, who stood in for Jimmie Johnson in the Hendrick Motorsport #48 after Johnson tested positive for COVID-19.

Allgaier started from the back of the grid and was making progress before the accident.

Harvick and Hamlin had been running together throughout the race, but Hamlin's Joe Gibbs Racing Toyota had the advantage over the Stewart-Haas Racing Ford after the final round of pit stops.

The pair had been called into the pits on the same lap, but a communication issue for Harvick meant he didn't receive the message and entered pit road a lap later, emerging behind Hamlin. 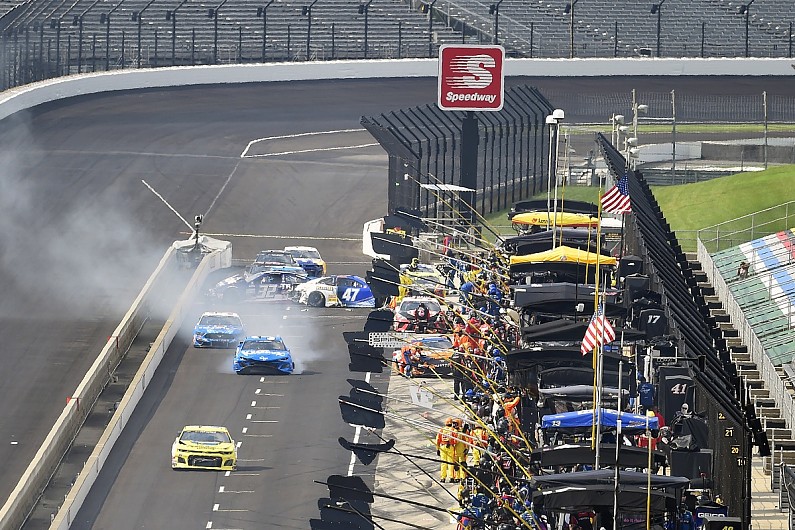 After a late race caution due to a crash for Alex Bowman, Harvick was almost caught out by third-placed Matt Kenseth, but managed to stay ahead of the Ganassi driver and brought the fight back to Hamlin.

Hamlin maintained his position for a number of laps and was pulling away from Harvick when a puncture sent him int the wall with seven laps remaining.

Clearing the incident sent the already delayed race into overtime, but three clean laps for Harvick allowed him to take the victory for the second year in a row ahead of Kenseth and SHR team-mate Aric Almirola.

Chase Elliott spent most of the race in the battle with Hamlin and Harvick, finishing runner up behind Harvick at the end of stage two.

But the Hendrick Motorsports crew mistimed his final pit stop, dropping him out of contention and he finished 11th.

Kurt Busch had also been running at the front of the field in the early stages of the race, but the #1 Ganassi Chevrolet fell off its jack during the chaotic opening pit stop and he lost valuable time.

It looked as if the 2004 Cup Series champion may have recovered in the closing stages of the race, but he fell back out of the top 10 after the penultimate caution.