Joey Logano scored his second NASCAR Cup series victory of the season in overtime at Phoenix, despite having to serve a mid-race penalty for a loose tyre.

Logano was slapped with the drive-through penalty on lap 136 of an eventual 316 after his Team Penske crew allowed a tyre to run loose through the pit-lane, which dropped the #22 Mustang from fifth to the rear of the field.

The 2017 Cup champion then worked his way back up through the field, helped by a high number of caution periods (12 in total) to take the lead on lap 226, running in the top five thereafter.

A caution period on lap 300 for a Ross Chastain spin after minor contact with Cole Custer and William Byron proved decisive in the race, as Logano opted to stay out whilst team-mate Brad Keselowski pitted the #2 Penske for four tyres.

Logano's gamble to stay out proved the right option, and after controlling the overtime period, he held off Kevin Harvick's Stewart-Haas Racing machine to record his 25th Cup victory and Penske's first in the spring Phoenix race. 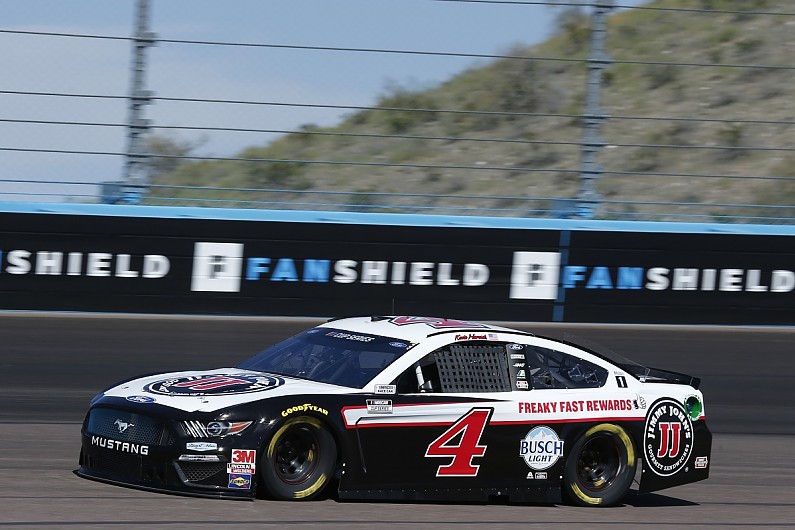 Behind Harvick came Kyle Busch, as the Joe Gibbs Racing driver was the only Toyota Camry exponent to come out of the race with a respectable result.

Busch's team-mate Martin Truex Jr retired late-on after a wall strike following contact with Aric Almirola and Denny Hamlin's race was ruined after an incident with pre-race points leader Ryan Blaney on lap 65 sent Hamlin tumbling towards the back of the field, and Blaney into retirement.

Elliott led for a majority of the first stage, but lost out on the segment win to Harvick following on a restart, while his race never recovered from an unscheduled pit-stop on lap 156 for a suspected loose wheel.

Almirola, Cole Custer and Byron rounded out the top 10, ahead of Keselowski, who could only recover to take 11th, although he could take the consolation prize of stage two victory.

Seven-time Cup champion Jimmie Johnson's winless run will reach 100 races, as the Hendrick Motorsports driver once again failed to win in the 99th race since his last win at Dover in 2017.

Johnson ran in the midfield for a majority of the race, and could only take 12th at the flag.