In his 134th Cup start, Bowman emerged as a contender for victory during a second stage in which he climbed from the periphery of the top 10 to battle with Larson. The two ended up fourth and third respectively at stage end.

Taking the lead early in the final part of the race, Bowman was the first driver to build a three-second lead at any point during the race and seemed en route to a comfortable victory.

But he struggled to clear lapped traffic in the closing 30 laps - losing 1.5 seconds on one lap alone - which allowed a charging Larson to close in.

With eight laps of the 267 lap race remaining, Larson managed to pass Bowman on the inside at Turn 1 to grab the lead.

But Bowman rallied, aggressively side-drafting the #42 Chevrolet down the back straight to regain the lead, and built a margin over the next six laps to prevent another assault from Larson.

Larson, who was in search of his first win in 62 races, had to settle for second - a position in which Bowman had previously finished in three times this year.

The race ended under the floodlights after a storm hit the circuit early on. Red flagged after just 10 laps, a delay of over three hours followed.

Seven-time Cup champion Jimmie Johnson led the field when the red flag was deployed and was a fixture among the top five throughout the race, threatening to end his own 75-race winless streak.

But unable to match Bowman or Larson's late race speed, Johnson slipped back and eventually lost out on third place to Penske's Joey Logano - the reigning champion managing to jump Johnson courtesy of an early final pitstop.

Behind Johnson, Logano's Penske team-mates Brad Keselowski and Ryan Blaney rounded out the top six. Blaney's race was one of recovery as he picked up a right-rear puncture at the end of stage one, having earlier run as high as second. 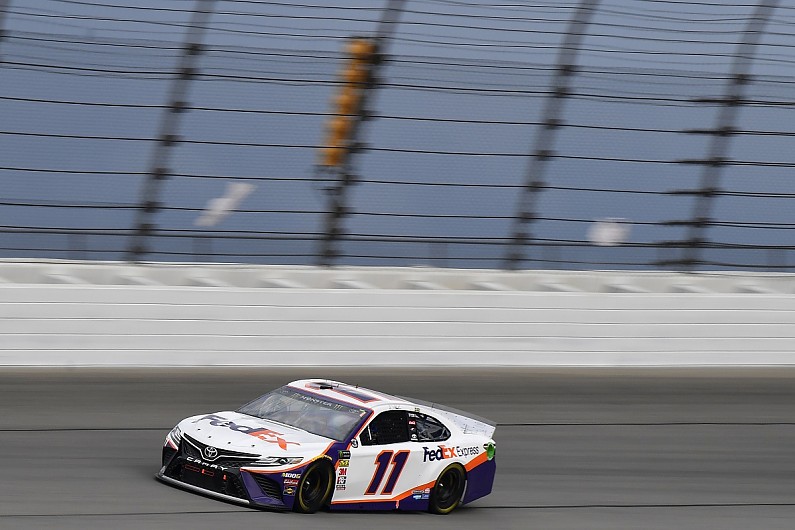 Inheriting the stage one win with a smart strategy by taking no tyres at his late-stage pitstop, Denny Hamlin would eventually slip back to finish 15th.

His race was compromised by a penalty for an uncontrolled tyre during a stage two pitstop.

Stage two winner Kevin Harvick had a similarly anonymous end to the race, finishing in 14th. He understeered into the wall while running third at the start of the final stage, and an extended pitstop for repairs dropped him out of contention.

Chase Elliott had also featured at the front of the pack throughout the first two segments of the race.

His victory hopes were derailed when his car was dropped onto the tyre gun air hose during a pitstop, with the delay costing him 18 places. He battled back to 11th.