Denny Hamlin overcame a pair of penalties to take his second win of the season in the NASCAR Cup series' first visit to Texas in 2019.

The Joe Gibbs Racing Toyota driver, who won the season-opening Daytona 500, won the second stage of the race and capitalised on a problem for team-mate and points leader Kyle Busch in the final stage to return to the front.

Hamlin's day was far from easy, though. During a green flag pitstop in the first stage he was judged to be too fast exiting the pits, while following his second stage win, a violation for a tyre leaving his pitbox further set him back.

However a combination of a final stage caution courtesy of Daniel Hemric, and a fast Toyota Camry allowed Hamlin to move back to the fore.

Suarez led nine laps, and had one of the fastest cars on track early on.

Erik Jones recovered from an early spin to lead 30 laps on his way to a fourth place finish, while polesitter Jimmie Johnson rounded out the top-five, leading a solid 61 laps and taking his best finish since May last year.

William Byron narrowly missed out on a first top-five finish, settling for sixth behind his Hendrick Motorsports team-mate. He beat the Stewart-Haas pairing of Aric Almirola, who was battling stomach flu, and Kevin Harvick.

Kurt Bush was ninth, one spot ahead of his brother, Kyle.

For much of the race it looked like Kyle Busch would win, completing a weekend sweep following his Truck series and Xfinity series wins. 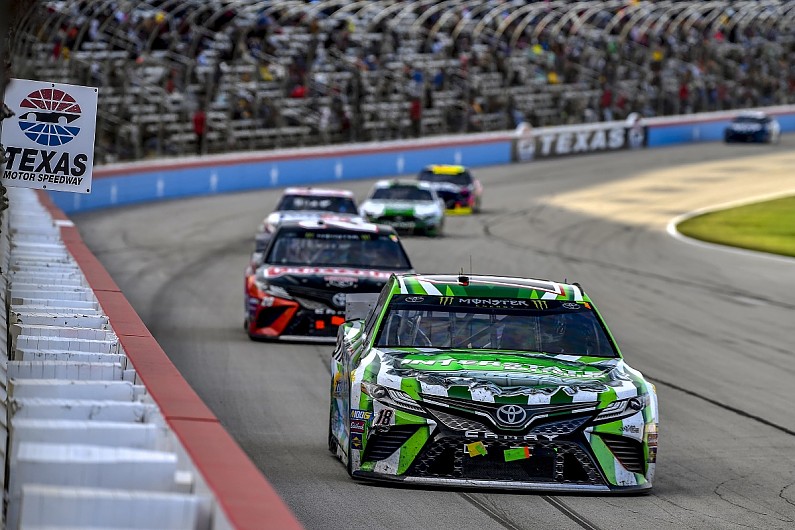 He eventually finished 10th, 11.6 seconds adrift of Hamlin, but on the lead lap.

While the race only had three regular cautions, it claimed a number of high-profile casualties.

Kyle Larson retired after 147 laps after contact with the wall left him with a terminal engine fire.

Penske's Ryan Blaney was also knocked out of the race due to an engine failure. He led 45 laps before his retirement, giving him the unenviable record of leading the most laps without a win this season.

His team-mate Brad Keselowski was sidelined with a transmission issue, but returned to the track to complete 279 laps and be classified 36th out of 39 starters.

The third Penske car of Joey Logano won the first stage of the event, but fell back to 17th and a lap down in the final order.