Bad weather had dogged the entire weekend and caused the postponement of what was planned as a Saturday night race.

That shower passed quickly and racing resumed, but on lap 19 a tangle between Ricky Stenhouse Jr, Tony Stewart and Jeff Gordon began a chain reaction that ultimately collected 16 cars.

A subsequent patch of clear weather allowed over half the distance to be completed pretty smoothly, with 11 different drivers leading the drafting pack along the way.

However an even more destructive crash would follow on lap 98 just after a restart for a debris caution.

This time it began in the lead pack with a touch between Joey Logano, Greg Biffle and Kasey Kahne, with a total of 26 cars embroiled in the subsequent mess and Kyle Busch ending the incident upside down. No one was hurt.

Only five more laps of racing would take place before the rain returned and steadily intensified.

NASCAR worked for almost an hour to try to keep the track as dry as possible, before admitting defeat and declaring the race over after 112 of the scheduled 160 laps.

Almirola had worked his way into the lead just before the larger of the two massive crashes and stayed there during the brief period of green flag running between the clear-up and the rain.

The result was the first win for the iconic #43 Petty car since John Andretti's victory at Martinsville in 1999. 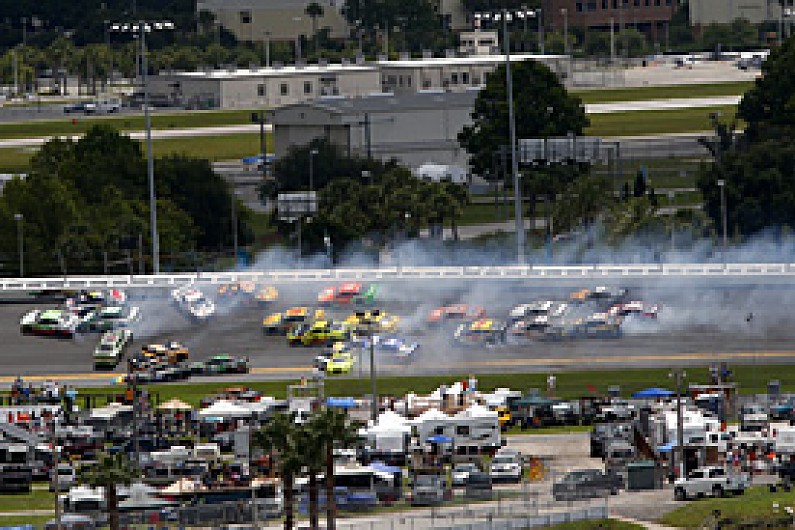 Brian Vickers claimed second for Michael Waltrip Racing, with Kurt Busch coming through the field from 40th on the grid to take third for Stewart-Haas.

Inevitably such a chaotic race provided a chance for underdogs, and it was Germain's Casey Mears and Leavine Family Racing's Michael McDowell who capitalised with fourth and seventh place finishes, split by Austin Dillon and Denny Hamlin.

Shock qualifying stars David Gilliland, Reed Sorenson, Landon Cassill and Bobby Labonte held their own among the frontrunners at first but all four were caught up in the second big crash.

Many of those involved in the first shunt were able to continue in patched-up cars, with reigning champion Jimmie Johnson one of the few exceptions.