Flavio Briatore has minimal mechanical knowledge and describes himself as a t-shirt seller, but the flamboyant Italian has achieved the extraordinary feat of winning titles with two different teams. Richard Barnes analyses Formula One's fourth man

With the World Drivers' Championship settled two races ago in Brazil, the F1 circus arrived in Shanghai to settle the 'other' Championship - the Constructors' title. The season-long dominance of Renault and McLaren turned the season finale into a straight four-man race, with Renault teammates Fernando Alonso and Giancarlo Fisichella pitted against the McLaren pairing of Kimi Raikkonen and Juan Pablo Montoya.

In keeping with the trend of the whole season, the eventual winner was going to be decided on reliability rather than outright speed. Failure to finish by one of the four protagonists would likely hand the title to the rival team. And, predictably, it was Juan Pablo Montoya who drew the short straw.

As is so often the case with Montoya, he couldn't be blamed directly for his retirement. In an ideal world, F1 drivers shouldn't have to contend with drain covers ripping through the flooring of their cars and damaging tyres and radiators. But F1 is not an ideal world, and acute peripheral vision is a key asset for any Championship contender.

The initial impression was that Montoya could not have seen or foreseen the loose drain cover in his path. The contrasting versions given by the two McLaren drivers afterwards indicate that perhaps it wasn't just bad luck. Montoya explained: "I came out onto the kerbs and I soon as I went through there one of the drains came up and hit my car. You don't see anything."

Kimi Raikkonen's version was "I saw it a little bit, it was out of place and next time I came around it was sticking up. I missed it and I guess he ran a little bit wider and hit it..." The (perhaps unintentional) damning conclusion is that Raikkonen's peripheral vision allowed him to spot the drain cover and take avoiding action next time around, while Montoya failed to notice the trackside detail at all.

That would be a harsh judgement. But these are the best drivers in the world, vying for Michael Schumacher's crown, so they will always be judged harshly. It was also perhaps pure coincidence, rather than any measure of driver awareness, that Raikkonen's focus was on the kerbing detail while Montoya's was elsewhere. Nevertheless, it again highlighted the Colombian's gift for being in the wrong place at the wrong time.

Raikkonen continued that Montoya's retirement ultimately didn't make much difference to the Championship outcome. Renault won the day and the Championship through a combination of better speed, effective team tactics and, arguably, the timing of the safety car periods.

For once, McLaren's kneejerk strategy - stuffing the car full of fuel for qualifying, trailing the opposition until they pit and then blitzing a series of hotlaps on light fuel to win track position - didn't pay off. That made for a refreshing and justified change. Effective and successful F1 strategy should be about teams thinking on their feet and reacting to changing race situations, not about rigidly following the same strategic routine for race after race.

McLaren chief Ron Dennis attempted to downplay the disappointment, claiming that the season's ten wins were "hardly a disaster". Anytime a team can win more than half the races in a season, they should have a lock on at least one, if not both, Championships. That McLaren contrived to lose both Championships might not qualify as a disaster, but it was surely a failure. And 'failure' is not a word that goes down well at McLaren.

Worse still was the prospect that McLaren's failure enhanced the credentials of the other 'fourth man' at Shanghai - Renault team boss Flavio Briatore. F1 is a meritocracy that has been ruled to the point of dominance by just three teams - Ferrari, Williams and McLaren. In the 27 seasons since the last Constructors' Championship win by the now-defunct Lotus in 1978, Ferrari and Williams have each taken nine titles, and McLaren has won seven. 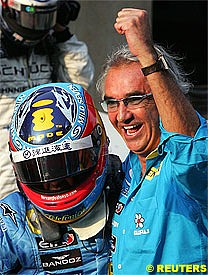 The only interloper has been Flavio Briatore, with a pair of Championships - the first for Benetton in 1995, and now for Renault in 2005. No other team have had a title to celebrate. Considering that Briatore hadn't even watched a GP until 1988, and - unlike Dennis and Sir Frank Williams - has no race engineering background, it's a remarkable achievement which becomes even more noteworthy when narrowed down to the era of Briatore's active involvement in the sport.

Since Briatore took over the Benetton team in 1989, his teams have scored six 'top three' Championship results in addition to the two CC titles. That is not quite in the Ferrari/Williams/McLaren league of achievement. But compare it to the rest of the field during the same period, where only two teams (Jordan in 1999 and BAR-Honda in 2004) have managed a top three CC finish.

The result is a clear three-layered hierarchy in F1 - the big three leading the field, the chasing pack of perennial losers, and Flavio Briatore teams occupying their own unique spot between the two. The 2005 title nudges Briatore closer to joining Sir Frank Williams, Ron Dennis and Ferrari's Jean Todt as the fourth man at the head of the F1 table.

Briatore will never be the most popular team manager in the paddock, not least because of his flamboyant lifestyle and his lack of engineering pedigree. The Italian's skills lie in marketing and motivation, not torque and traction. Until this year, there was the suggestion that his sole Constructors' Championship title was a once-off, a freakish alignment of the stars that brought together Michael Schumacher, Ross Brawn, Rory Byrne and the rest of the winning Benetton team.

Now that Briatore has won with a completely different team and set of personnel, there can be no doubt that he is a legitimate and deserving achiever. Of course, the glory is not Briatore's alone. In both cases, he had the engineering excellence and innovation of Renault, the support of gifted engineers and designers, and the precocious talents of a standout driver to spearhead his campaign. But the big three also rely on works support, great drivers and brilliant engineers. As a catalyst for bringing together a winning team, Briatore has excelled. Over the last fifteen years, he has been the only man to take on the big three - and beat them.

The Chinese Grand Prix's 'fourth men' will have left Shanghai in vastly different moods - Briatore flushed with success, Montoya wondering what he must do to get a lucky break. Both will have just a few short months to mull over it, before the slate is wiped clean and memories of 2005's triumphs and failures are replaced by eager expectations for the new season.