Apart from the title race, what other statistics is Fernando Alonso on heading? Who scored his first podium finish 17 years ago, and what happened 26 years ago this week? Marcel Schot brings the answers and more anecdotes on the sixteenth round of the season

While we know the results of the races so far and what they've brought us in the Championship, it might be interesting to see how things developed throughout the races. When we look at the average position over all laps driven - excluding the US Grand Prix farce - Fernando Alonso beats Kimi Raikkonen with 3.1 against 3.8. The Renault driver clearly wins it by driving more laps in the top three, even though Raikkonen led 349 laps against his 278.

When looking at average position, Michael Schumacher ranks only seventh. There are several possible reasons why the German's so much further up in the Championship than seventh. Either he maximised every opportunity he got or the drivers ahead of him failed when they had the chance to beat him. In the first half of the season, Schumacher certainly maximised his opportunities. Of the seven races he finished up to Silverstone, he only drove eleven laps on a position higher than which he finished. However, for Hockenheim, Hungaroring and Monza it was a very different story. In three races, Schumacher drove 112 laps in a position higher than where he ended up.

The semi-downfall of Renault is certainly casting doubt on whether Fernando Alonso will actually be able to take home the Championship that statistically seems his for the taking.

For each driver his first podium finish is a big milestone. Especially doing it in Formula One, which for most is the pinnacle of their career. Only 789 people have managed to be present at a Grand Prix weekend as a driver. 713 of them have actually started a race, while 300 of them scored points. 187 of this 789 people elite have scored a podium finish, which is less than every one in four. In the 1988 Belgian Grand Prix Ivan Capelli joined this elite within the elite.

For the Italian it was his second full season in Formula One with the Leyton House March team. In 1985 and 1986 he had made brief appearances with Tyrrell and AGS, but in 1987 he landed a full time seat at March. Unfortunately the car was quite unreliable, finishing six out of 16 times, and Capelli only managed to impress by scoring a point in Monaco. However, he retained his seat in the following season and despite changing fortunes managed to put together a solid campaign. Until round eleven of the season at Spa-Francorchamps, Capelli had managed fifth places in Canada and Germany, as well as a fourth place on the grid in Hungary.

Qualifying on Friday was a drama for Capelli, who saw two of his runs being messed up by first a puncture and then a suspension failure. However, despite the problems he put the 14th time on the clock, just behind his teammate Mauricio Gugelmin. This meant the March cars were fifth and sixth of the normally aspired cars, behind both Williams and Benettons.

As happens so often at Spa, Saturday was wet. Obviously this meant times from Friday were not going to be improved and Capelli announced that finishing would be the main target, despite a hopeful free practice result on Saturday morning.

At the start of the race, Capelli beat teammate Gugelmin into the first corner to claim 13th, with Williams driver Martin Brundle ahead of him. In the first ten laps of the race Capelli tried hard to get past Brundle, but the Briton wouldn't budge. Lap after lap the March crossed start-finish right under the gearbox of the Williams. The two had moved up a place when Gerhard Berger pitted his Ferrari after two laps and briefly had Gugelmin between them, the Brazialian on his way up.

However, in the process, Brundle had asked too much of his tyres and was starting to struggle more and more. By lap 13, Capelli had finally gotten rid of the Williams and immediately pulled a gap, now chasing Gugelmin, who was a second ahead. Together the duo was catching up with the Williams of Riccardo Patrese, and on lap twenty Capelli made his way past Gugelmin into eleventh as his teammate was suffering problems with his clutch.

Capelli slowly but surely closed the two-second gap to Patrese, gaining a position when Satoru Nakajima retired. In the space of three laps, Capelli made his way past both Patrese and Eddie Cheever in the Arrows. Now without traffic ahead, Capelli's laptimes instantly became three seconds quicker as he closed the ten-second gap to the other Arrows of Derek Warwick. By lap 34 the Italian was all over the Arrows, but it would be another two laps until he found a way past. The retirement of Michele Alboreto in the Ferrari in the same lap put Capelli in sixth place with Nelson Piquet (Lotus) and Alessandro Nannini (Benetton) less than five seconds ahead.

While Nannini proved too fast for Capelli, Piquet was fading fast and, with two laps to go, the Italian moved his March ahead of the Lotus. In the end, fifth place wasn't a bad performance considering the disastrous start of the weekend. However, fifth turned into third in the end as both Benettons were disqualified due to fuel irregularities.

In 1979 Ferrari's glory days were in full swing in mid September. Coming to Monza, Jody Scheckter was leading the Championship with 44 points, eight ahead of Ligier's Jacques Laffite and twelve ahead of the second Ferrari of tifosi favourite Gilles Villeneuve. However, between those two pursuivants, Williams driver Alan Jones was making a strong impact. Three consecutive wins had put the Australian on 34 points and full of confidence. In the Constructors' Championship Ferrari were leading comfortably with 80 points, 19 ahead of Ligier and 22 clear of Williams. 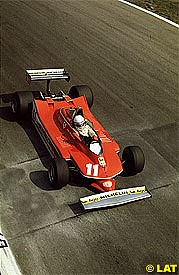 While Jones continued his good run in the early stages of Friday qualifying, Rene Arnoux in the Renault was on top of the timesheets in the end. Towards the end of the session the Frenchman went two tenths quicker than Jones, who was stranded in the pits after a collision with Patrick Tambay in the McLaren. Villeneuve ended up just 0.007 seconds behind Jones, with Clay Regazzoni in the second Williams, Jody Scheckter and the second Renault of Jean Pierre Jabouille behind him. Those six cars also where the ones within a second of the fastest time. Both the Brabhams of Niki Lauda and Nelson Piquet followed, a little over 1.5 seconds behind Arnoux, with the rest of the field over two seconds slower.

On Saturday things went marginally quicker, with Jabouille setting the fastest time and grabbing pole ahead of his teammate Arnoux. Behind the two yellow cars, it was Scheckter who barely beat Jones and Villeneuve. Championship contender Laffite finally got things a little better and managed to climb to a seventh place on the grid.

After the death of Ronnie Peterson the previous year, the start of the race on Sunday was an anxious affair. Fortunately the entire field got underway without harm. However, at the start of lap two, many hearts skipped a beat or two. Going into the Curva Grande, Piquet attempted to pass Regazzoni, who promptly shut the door. Without actually making contact, Piquet was pushed off the track, lost control and hit the guardrail at high speed. The Brabham looked completely destroyed and Piquet caused some panic by disappearing before anyone had noticed and only showing himself again when he walked into the pits.

Meanwhile the five who started ahead of Piquet and Regazzoni had created a gap for themselves. Arnoux was leading, followed by Scheckter, Villeneuve, Laffite and Jabouille. Jones had fallen far behind after a problem at the start. Regazzoni, unaffected by the incident, was sixth.

Thirteen laps into the race the first change in the top five occured as a disappointed Arnoux steered his Renault into the pits with an electrical problem. Now the battle was for the Championship, with Scheckter leading, Villeneuve as buffer, and Laffite without hope in third. With the Championship counting the best four from the first seven races and the best four from the last eight, a win for Scheckter meant the Championship would be his. Only if Laffite had passed Villeneuve, the Frenchman would have a small chance left.

The Ligier driver fought for all he was worth, but a problem with the clutch meant he was losing ground on Villeneuve in the second half of the race and eventually led to overheating of the engine. With nine laps to go Laffite admitted defeat and retired. Scheckter took victory, with Villeneuve right behind him and several times coming close enough to make clear that he could have won if he hadn't put the team ahead of himself.