Following last year's Monaco 'incident', in which Juan Pablo Montoya and Michael Schumacher collided in the tunnel, this column ventured that the German had simply not seen the Colombian beside him. As Schumacher wove about infusing heat into his tyres ahead of a restart, he did not see Montoya due to the Ferrari F2004 being equipped with mirrors whose primary function was not retro-vision, but aerodynamic 'clean-up'. After the event Schumacher admitted to not having seen the Columbian in his mirrors. 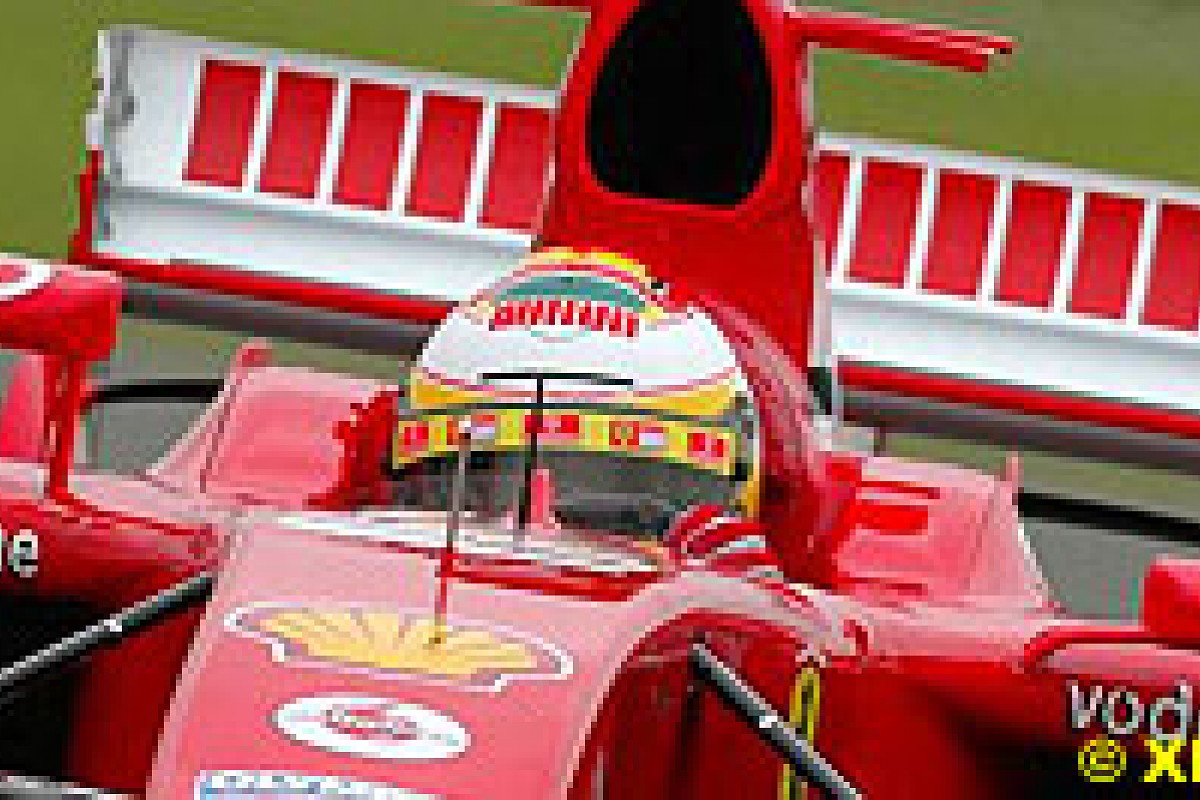 Accompanying photographs illustrated how Ferrari had sited F2004's mirrors back towards the driver, and down from his line of sight in a quest to maximise airflow around the driver.

Since then, of course, Schumacher has had two further run-ins with competitors in which he stated he had simply not seen them. His post-race comments in Melbourne, where he turned into Nick Heidfeld and was heavily criticised by the Grand Prix Drivers' Association - of which, tellingly, he is a director and chairman - bear repeating. Ditto his comments after crashing into Mark Webber in Istanbul.

"At one point I lost sight of him (Heidfeld) in the mirrors and went into the corner when I felt I'd been hit. I have seen the incident on film: Heidfeld was on the grass and so was not in full control of his car. I can't blame him for trying to overtake me," said Michael on Australia Sunday.

And, so Heidfeld was - not in full control - particularly after being squeezed right off the black stuff and onto green blades - a point the GPDA is said to have made rather robustly.

Now for Istanbul: "As I began to brake, I could no longer see him and, when I was in mid-corner, I felt a bang at the back as he hit me with his nose," Schumacher said in an official post-race statement.

"Recent races have seen a whole host of debate about Schumacher's wing mirrors and the mirrored lollipop used at pitstops. The wing mirrors are simply re-sited to allow the World Champion to view his rear tyres during the race and make better judgment on how to preserve them.

"But mirrors are not solely designed to be aerodynamically neutral, instead they do have a positive influence on the flow over the join between sidepod and engine cover. Indeed, the small inboard section of sidepod they are often attached to is a separate piece of bodywork to allow changes to the leading edges' shape. Schumacher, however, has requested that Ferrari forego the small aero benefit of the usual crank-mounted mirrors and instead have slightly less efficient upright versions.

"Equally, the mirror on the lollipop is to allow the driver to anticipate the refueller's pulling the nozzle out, rather than simply waiting for the lollipop to be lifted." 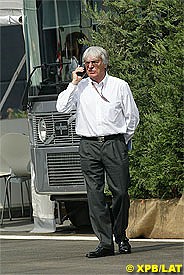 Taking the first aspect first: should a Formula One driver, particularly one said to be seriously concerned about safety, be permitted to site mirrors primarily to judge the condition of his tyres? Here is, after all, a driver, who has been involved in two substantial crashes - one at a circuit which saw a marshal lose his life - in the past six months, yet believes the primary function of rear view mirrors to be the facilitation of tyre checks.

Should not the FIA impose mandatory and random examinations during scrutineering and in Parc Ferme on the effectiveness of mirrors by checking 'blind spots' through optician-style boards? Surely if safety is paramount, and recent FIA actions and regulation changes indicate it to be so, such an elementary requirement should form part and parcel of next year's regulations? The mere fact that Schumacher had a choice of mirror sitings - based primarily upon aerodynamic functions, not vision - indicates surely that such a regulation is overdue.

Of all the statements emanating from Formula One Management Ltd this year, the latest document issued late on Tuesday evening by KHP Consulting, Bernie Ecclestone' favoured public relations agency, sure raised eyebrows. Not, though, on account of what it said, but rather on account of what exactly.

Three sentences making up one four-line paragraph advised the world that shares in SLEC, owned 75/25 by a trio of banks who got themselves shafted into acquiring same, and Bernie Ecclestone, are categorically not for sale.

What prompted the document? Sure there has been ongoing speculation that no less than six separate groups - ranging from a Hong Kong-based telecoms conglomerate through Rupert Murdoch's BSkyB television broadcaster to a private equity group fronted by a blonde Threadneedle Street whiz-girl - were chasing slices in the organisation named after SLavica ECclestone, Bernie's wife.

In this context the FOM statement is equally unhelpful: In the opening sentence it states "...it has been reported that approaches have been made..." (note plural), then confirms that "..the approach has been made..."(note singular).

Why the document in the first place, particularly when issued by a subsidiary twice removed from SLEC? More particularly, when signed by Ecclestone, whose function and management of the company was last week subject to an internecine court action between two companies within SLEC. Even more particular as sources indicate that the outcome of Friday's matter, between Formula One Holdings and Formula One Administration, as heard by Justice Peter Smith, considerably weakened the F1 tsar's standing within SLEC and its complicated operating structure.

Allegedly Bayerische LB, Morgan and Lehman Bros, the three banks holding 75% between on a far from equitable basis, were granted legal entitlement to add directors to the board of FOA, enabling them to seize formal control. Such appointment formalities had been conceded by Ecclestone prior to an out-of-court settlement in May, so Friday's judgement was merely an enforcement order demanding that Ecclestone surrender management control and board majority to the banks.

That matter, though, revolves around FOH and FOA, whilst Tuesday's document as distributed by KHP was originated by FOM, a subsidiary company twice removed in SLEC's pecking order from FOA, which, in turn, is once removed from FOH. This, in turn, is one step up the ladder from FOH. Given that Ecclestone has a reputation for absolute fastidiousness in all matters, from the cut of his collar to the colours of his vehicles, it is a given that the choice of originating company was a much thought-through matter.

Two questions thus arise: 1) May a subsidiary of a holding company, over which Ecclestone no longer exercises control, legally issue such statements without referral to the majority, and, more importantly, 2) Was Ecclestone empowered by the majority to issue such statements in the first place, and, if not, will said statement influence the predators, who, incidentally, need only persuade the banks to sell - and not Ecclestone?

Crucially, the statement was issued under Ecclestone's signature, with the seals of representatives of the three banks being rather conspicuous by their absence - and, given that they unwillingly inherited 75% of Formula One's commercial rights' holder, they could be more than willing sellers at, of course, a price which reduces to zero or better their $1,6bn exposure.

Given their present vulnerability, particularly should the G9+5 teams - those opposed to financial structures which grant 77% of F1's billion dollar per annum income to SLEC whilst ten teams split the balance - go their own way and form a rebel series. The banks' share would be worthless in such a scenario, and, as of now, each passing month reduces their market value by 3%. Against such background, Ecclestone's statement, if made on an umbrella basis, is even more inexplicable.

Today, Wednesday, sees the big meeting in Milan between Max Mosley on the one side and the G9+5 teams on the other, and it is not inconceivable that FOM's statement is related to that. Exactly, though, what the game plan could entail is, at this stage, unfathomed. Should peace be in the throes of breaking out, as seems possible given the moods of conciliation washing about the sport, the banks may find in G9+5 a more than willing buyer; alternately, the banks shares will retain their value in the longer term should an extension to the Concorde Agreement, the contract binding SLEC, the teams and the FIA until end-2007, be thrashed out.

So, again, the banks may wish to sit tightly upon their shares, but, again, is it Ecclestone's station within SLEC to broadcast same on their behalf, particularly given their multi-billion dollar involvements?

So, all in all, a strange statement was let loose upon F1, particularly given the background and timing. In the fullness of time matters will no doubt become clearer. But, with teams, their technical partners and the banks demanding greater transparency in all matters SLEC, doubts exist as to whether FOM's release has actually clarified anything.