Ducati dominated last month's two-day test at the circuit, which is hosting the first Austrian GP since 1997, and even with significantly cooler conditions and previously-unused rear tyres from Michelin maintained that advantage on Friday afternoon.

Valentino Rossi was the best of the Yamaha riders in fourth, 0.012s behind Vinales, while Jorge Lorenzo was eighth, having not used a fresh or softer rear tyre at the end of the session.

"We started FP1 with the set-up we prepared three weeks ago during the test, but the conditions were very cold and the new tyres that Michelin brought are quite hard considering the temperatures," Yamaha team director Massimo Meregalli said.

"Due to this we had to almost start from zero again regarding our settings.

"For tomorrow it will be fundamental to reduce the gap, which is quite significant.

"To do so we'll study the data we collected today, especially as Jorge is not comfortable with his bike.

"Contrarily, Vale is more comfortable with it, though there are still opportunities to improve and I'm confident that we can make another step forward for tomorrow and I hope the weather will do so as well."

Rossi declared his day "quite positive because my pace was good", other than the gap to Ducati. He had also been fourth in the morning session, when Lorenzo was seventh.

With Lorenzo looking to shake a tough run of form, the cooler conditions did not play into his hands.

"Especially in the morning it was very cold and it's only been on a few occasions that it was colder than today," he said.

"It was tricky because we had to be careful in some corners to avoid crashing.

"In the afternoon it was a little bit better, with the temperature a few degrees higher, so we had a better feeling but we hope tomorrow the sun will shine a bit more and we'll have more confidence." 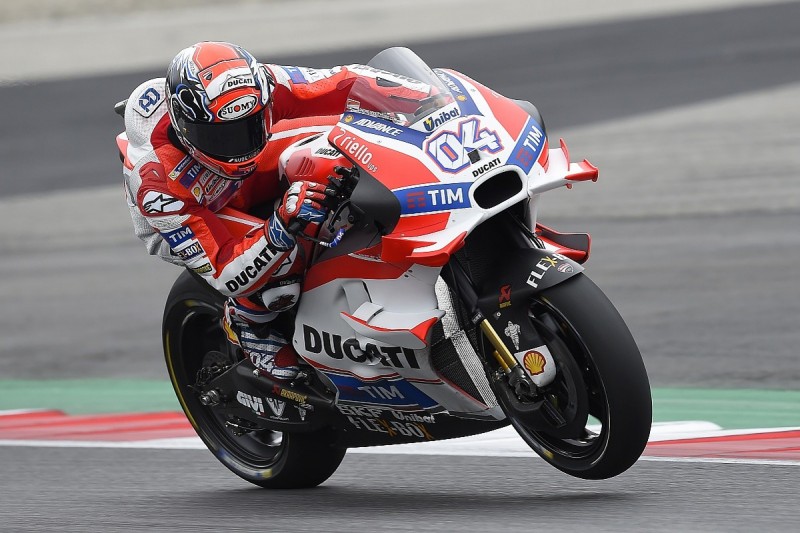 DOVIZIOSO BUOYED BUT NOT COMPLACENT

Vinales upstaged the heavily-fancied Ducatis to set the pace on Friday morning, when Dovizioso was second fastest, just 0.079s behind.

While Ducati was back on top in the afternoon, weather conditions are forecast to improve on Saturday and Sunday, and Dovizioso knows Friday's form counts for little.

"I am very pleased with the way my weekend has begun, even though we found the tyres, and above all the weather conditions, completely different to those during the test in July," he said.

"Despite this we were able to confirm our good form and everything is going well, but it's not enough because we still have to improve some aspects in view of the race.

"What is certain however is that, with the speed we have, we can use tomorrow's two sessions to search for the best race pace."