'Very slow' Jorge Lorenzo had 'nothing to lose' with Assen pitstop

Ducati rider Jorge Lorenzo says he had "nothing to lose" by pitting when it began to rain in MotoGP's Dutch TT, as he was "very slow" in mixed conditions anyway

The three-time MotoGP champion suffered the worst qualifying of his premier class career to date at Assen, as he toiled to 21st on the grid in the rain on Saturday.

With the race starting in the dry, Lorenzo was able to make steady progress up the field, gaining four positions in the opening lap and rising to as high as 12th with nine laps to go.

But the onset of a light drizzle in the closing laps marked the end of his charge, causing him to drop his pace and dive into the pits to change to his second bike fitted with wet tyres.

Lorenzo ended up claiming the final point in 15th, a lap down on race winner Valentino Rossi.

"I wasn't really fast, I was losing mostly half a second to the fastest ones," said Lorenzo.

"But I was really consistent, I was catching [Andrea] Iannone, I was getting closer to the other group with [Jack] Miller and [Dani] Pedrosa. 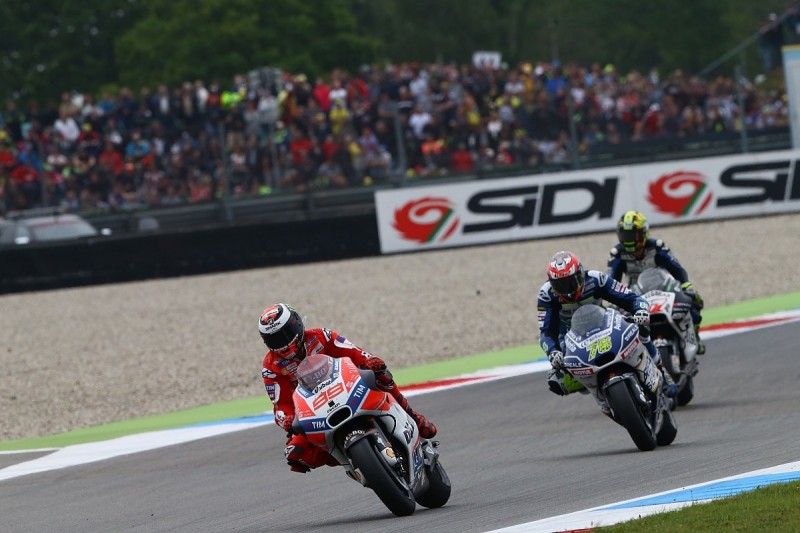 "When it started spitting, I started to drop my pace so much, more than the ones in front and the ones behind.

"They overtook me and I said 'OK, I have nothing to lose'.

"Probably I lose two points or one points, so I took this gamble and see what happens.

"But it didn't rain more, it stopped raining and the rain tyres were too soft for the conditions."

Lorenzo added his decision to pit was based partly on it raining heavily during Sunday morning's warm-up session, contrary to weather forecasts.

Asked if he immediately regretted his decision to change to his second bike, he replied: "It was spitting for three or four laps, and it stopped again.

"It was a gamble, knowing in the warm-up nobody expected it to rain. I had nothing to lose, finally I lost one point but I could have won seven or eight.

"I was losing five seconds a lap on the slicks, so the other riders would have overtaken me [anyway] if I kept riding."