A week after showing good wet pace and then winning a mostly-dry race at Assen, Rossi was part of a Yamaha slump in Sachsenring qualifying on Saturday.

"Here in Sachsenring, like happened a lot of times this year, we have a very different feeling from one track to the other with the bike and especially with the tyres," Rossi said, having qualified ninth.

"So this is a great surprise of this year.

"Usually in the last years we were more consistent and this feeling [now] is very difficult to manage because you never know what you have to expect."

At Assen, Tech3 Yamaha privateer Johann Zarco claimed his maiden pole on a wet track, with Rossi - running his preferred new Yamaha chassis - qualifying fifth and then winning the race in mixed conditions.

This weekend Rossi starts behind Zarco's team-mate Jonas Folger but ahead of the second works bike of Maverick Vinales, with Zarco way back in 19th.

"On the wet I struggle more, looks like all the Yamahas struggle - except Folger, in the end he's not so bad but it's like we're a bit slower compared to Ducati and Honda," Rossi added.

Asked whether Michelin's tyres were the cause of Yamaha's varying performance, Rossi was non-committal in his answer but said it was not down to the bike.

"Imagine that Zarco with the '16 bike - last week on the wet he was on pole position, and after a week in the same condition he's in 19th place," said Rossi.

"So it's not the bike, because also for me it was the same with the new chassis. I was strong in Assen on the wet and here I struggle more.

"It's very difficult to understand because also, compared to last year, the feeling with the bike and the setting is incredibly different." 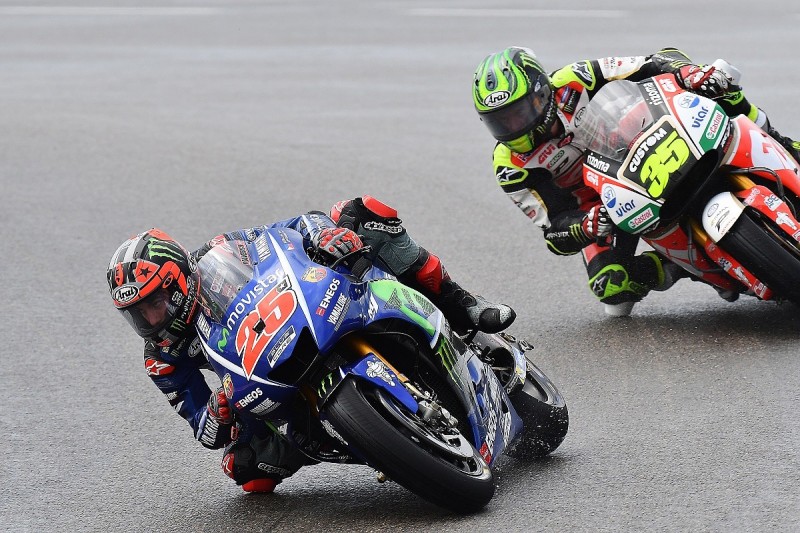 Vinales, who qualified a tenth and a half behind Rossi in 11th, said he was losing most of the lap time on acceleration having followed Dani Pedrosa's Honda for a while and compared them.

"Our bike is very strong with the front, braking and going into the corners I feel really strong but suddenly when we touch the gas, we lose so much," Vinales said.

"Our bike has no drive. Especially from zero to 100, our bike is really slow. It's really strange because on the dry it's totally normal.

Asked about Vinales' suggestion that Yamaha was losing time on acceleration due to electronics, Rossi replied: "I don't know the problem of Maverick, but in acceleration we lose compared to the other bikes.

"It looks like we have less traction and on exit of the corner we spin more."