Following his European GP win last weekend, Mir comes into this weekend's second race at the Ricardo Tormo Circuit facing his first match point in the championship with a 37-point lead.

Franco Morbidelli set the early pace on his Petronas SRT Yamaha with a 1m32.195s, though the surplus in grip compared to last weekend meant times would rapidly tumble.

Morbidelli and Pol Espargaro on the KTM traded top spot for the first 10 minutes, with the former dipping underneath the race lap record with a 1m30.944s.

This stood as the benchmark for the next 10 minutes of the session before Nakagami on the 2019 LCR Honda moved ahead with a 1m30.829s.

With no threat of rain for the rest of the day, there was no rush for time attacks in the latter stages, leaving Nakagami's time intact through to the chequered flag.

Morbidelli trailed the LCR rider by 0.115 seconds, with Maverick Vinales completing the top three on a more encouraging start to this weekend than the disastrous European GP. 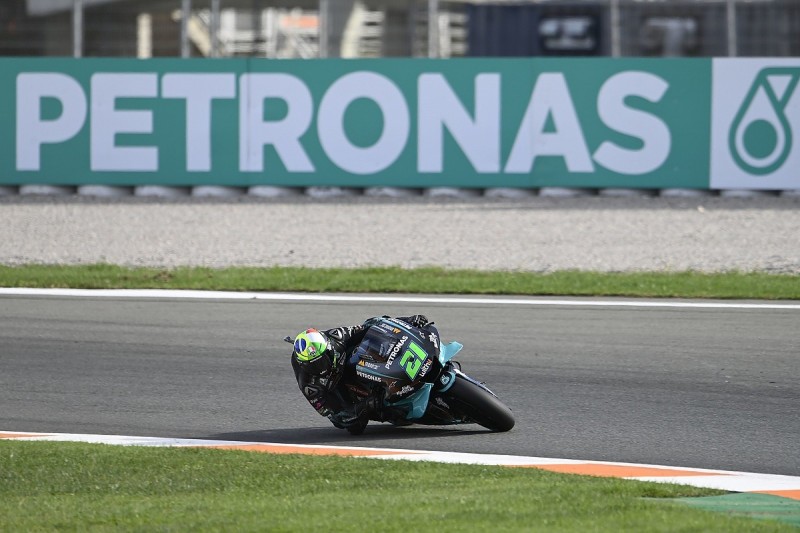 Espargaro held fourth on his KTM ahead of his Aprilia-mounted brother Aleix Espargaro, while Johann Zarco was sixth and top Ducati runner on his Avintia GP19.

He headed the factory GP20 of Andrea Dovizioso, who announced earlier this week he will be taking a sabbatical in 2021.

Dovizioso was 0.026s clear of Mir on the Suzuki, with Tech3 KTM's Miguel Oliveira and the Honda of Stefan Bradl round out the top 10.

Bradl will remain on the factory RC213V for the final two rounds, after HRC confirmed earlier this week reigning world champion Marc Marquez would not return to action in 2020.

European GP runner-up Alex Rins was a low-key 11th on his Suzuki ahead of Pramac's Jack Miller and Valentino Rossi on the Yamaha, who was cleared to ride yesterday following another scare with COVID-19 tests on Tuesday.

With his championship hopes all but gone, with the SRT rider trailing Mir by 37 points along with Rins, Fabio Quartararo's FP1 appeared to be another frustrating affair down in 16th.

There looked to be more struggles for the Ducatis of Danilo Petrucci and Francesco Bagnaia (Pramac) down in 18th and 19th, while Lorenzo Savadori was 1.943s off the pace in last place as he began his second MotoGP race weekend with Aprilia.

Tech3's Iker Lecuona was absent from FP1, but is expected to ride from Saturday having cleared a COVID-19 test after positive case for his brother forced him out of the European GP.