Binder recovered from an early long lap penalty - a legacy of his clash with Jack Miller at the Teruel GP last month - to beat Dovizioso in the closing stages to finish seventh in the first of two Valencia races on the rearranged 2020 calendar.

After the race, Dovizioso told the press Binder's pace was "not nice to see" and admitted it was difficult to match the KTM rookie.

Binder admitted on Thursday ahead of the Valencia Grand Prix it was "super cool" to read "legend" Dovizioso's comments about him.

"For sure, it's always cool to read things like that," Binder said when asked by Autosport what he made of Dovizioso's comments.

"It's true the end of the race last week the pace was quite good and I was able to catch him.

"So, it was cool to see. I mean, he's one of the legends of the sport and it's super-cool to read things like that. 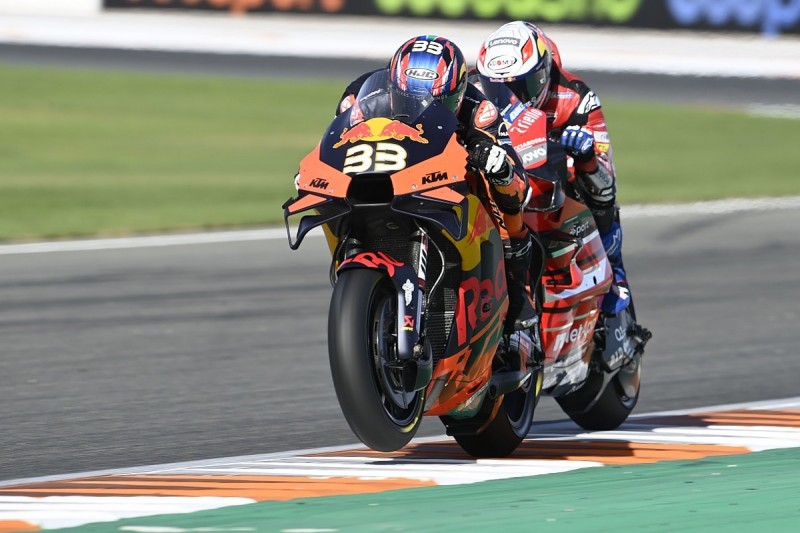 "I felt like we made a good step last week and I'd like to just try and keep building from where we finished off."

Binder comes into the penultimate round of the season nine points clear of Honda's Alex Marquez in the rookie of the year battle, after the latter crashed late on in the European GP.

Dovizioso announced earlier this week he would be taking a sabbatical from MotoGP in 2021, having turned down offers to become a test rider from several manufacturers.

The outgoing Ducati rider was also linked to a race seat with Aprilia for next year, but explained the Italian marque wasn't "the situation I need for my career" right now.

He plans to race in motorcross next season, having secured backing from "an important sponsor", and will remain fully fit with a view to returning to the MotoGP grid in 2022.

Next year Binder will remain at the factory KTM squad, but will be joined by Miguel Oliveira, as Pol Espargaro departs for Honda.