Pirro, 31, has been Ducati's test rider since 2013, after contesting one full season in MotoGP in '12 on a Gresini-run FTR-Honda.

Ducati has given him wildcard outings on works machinery every season, and he has also often been used as a stand-in for injured riders at its satellite teams as well as regularly racing in Italian Superbikes.

Pirro appeared on a third factory Ducati in MotoGP's two Italian rounds at Mugello and Misano this year - matching his career-best with fifth in the wet San Marino Grand Prix a fortnight ago.

While he is set to race again in the season finale at Valencia, Pirro says he would be able to achieve better results for Ducati if he were to be given a more regular racing role.

"I have to ask [Ducati team boss Gigi] Dall'Igna, but I believe that if I race more consistently I could fight for important positions," said Pirro.

"At Misano I finished fifth, and also at Mugello I was with [Jorge] Lorenzo all race, so I can't complain about my speed.

"Racing so little is difficult.

"For example, in qualifying I tried to follow [Marc] Marquez, who qualified on the front row, but I made a mistake and fell (pictured below) and had limited chance to make the most of it afterwards." 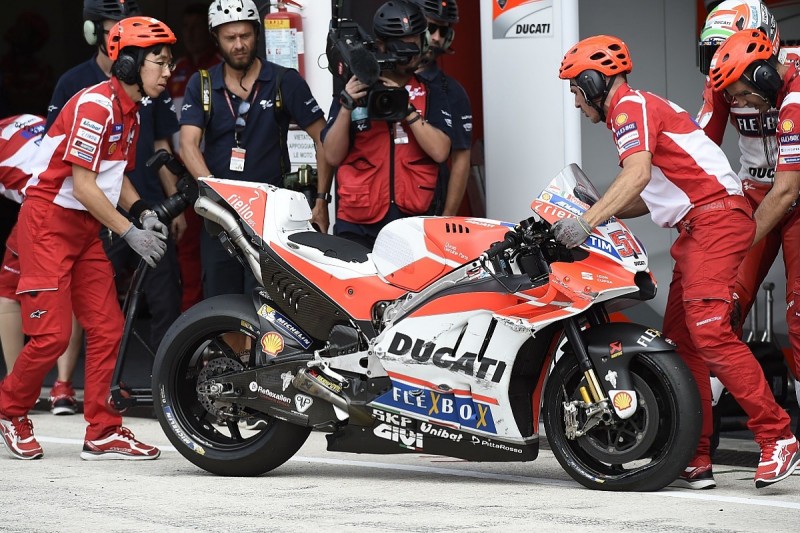 Pirro admitted he took a cautious approach to the Misano race, having not had any wet-track mileage in a long time.

"It was a-year-and-a half since I last raced in the wet, because we never did a rainy test," he explained.

"We got some problems in the warm-up so I did not push too much, and maybe in the race it took me a few laps to find the rhythm.

"The only regret I have is that I don't take too many risks in the first seven or eight laps of the race because I ride in MotoGP once every three or four months.

"This cost me, because I lost touch with the leader after a few laps, but then I kept my pace more or less until the end."

Though Pirro said "we have to stay focused to help Dovizioso fight for the MotoGP title", he admitted Marquez's Misano win "proved that he is the man to beat".