World Superbike Championship racer and Suzuka 8 Hours winner Lowes made his debut on home soil at Silverstone last weekend, filling in for the injured Bradley Smith.

He qualified 16th - one place and just 0.029 seconds behind Espargaro in the wet - and scored points with a 13th-place finish, while Espargaro was involved in a first-lap accident.

Having flown straight to Magny-Cours for a WSBK test afterwards, Lowes heads to Misano for the second of his two currently-confirmed starts.

"It would've been interesting to see where Pol would've finished," Lowes said of the British GP.

"Obviously I don't expect to beat him [at the first attempt], that would've been silly of me. But I don't know whether he would've been 10 seconds or 15 seconds in front of me.

"This week I'll try and make that a lot closer.

Lowes' only previous experience on a MotoGP bike was a 15-lap run at Brno last month as a reward for his Suzuka victory with Espargaro and Katsuyuki Nakasuga. 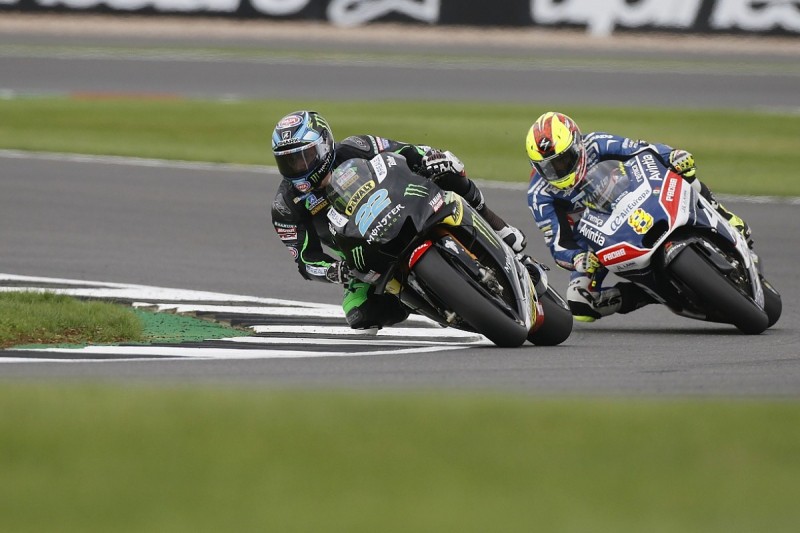 With his Silverstone laps, Lowes estimates he has now done the equivalent of a single test day, and said he was learning about lines while following other riders in the race.

"I didn't feel too good, but in the end I took some points that was my goal," he said.

"I was doing some lines that are just fucking wrong, and I was going in thinking, 'well I shouldn't really be going this fast at this point', and there are different places where I'd basically stopped and they're driving away from me.

"So I need to change how I ride the bike a bit, I need a bit more understanding. I'm not even quite sitting on the bike right, which is creating a lot of problems.

"With the World Superbike you have to keep the bike up because you can't run the same lean angle.

"In the race - I know it sounds silly - but every lap there was one part of the track where I was trying to sit in different positions just to see what difference it made.

"You shouldn't be doing that during the race, but I needed to understand."

The 25-year-old believes he will also be more comfortable giving Tech3 feedback at Misano than he was at Silverstone.

"Whereas before with the practice sessions we had - which weren't in ideal conditions either - I've not really been 100% convinced that what I'm saying is right because I didn't know."