The 2014 World Superbike champion was called up for his home grand prix at Le Mans, after Suzuki test rider Takuya Tsuda raced at Jerez.

Rins crashed in practice at Austin in April, breaking his left wrist in two places, and is targeting a return for either his home race at Barcelona or the subsequent post-grand prix test.

In his first MotoGP start since the 2011 German Grand Prix, Guintoli - now racing British Superbikes - picked up a point with 15th place.

He will continue with Suzuki at Mugello as it looks to bounce back from a tough weekend at Le Mans, with Andrea Iannone only managing 10th.

"We couldn't deliver a good package for the race to Andrea, which prevented him from being able to push as much as he would like," team manager Davide Brivio said. 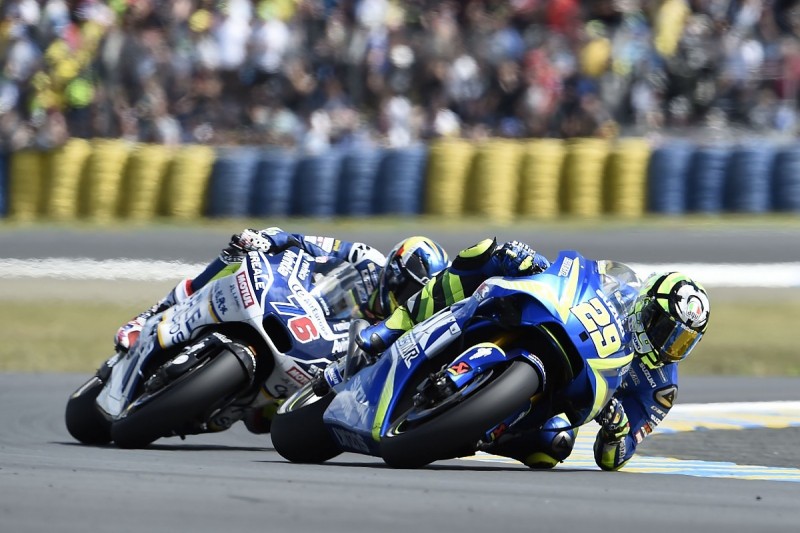 "We have to be positive and look ahead. I hope the next races will take place in more stable weather conditions.

"Right now we have to work hard on the data to find the problem, and hopefully some solutions.

"For sure this is not demonstrating the potential that the rider and the machine can reach. We need to find away to make them work better together.

"Sylvain had a positive debut. Also for him, the conditions weren't very friendly since he could only complete one dry session before the race.

"But he will continue to race with us in Mugello, so I believe that this experience will pay off in the near future."