Marquez started the Le Mans race having won at Austin and finished second at Jerez to vault into championship contention after a slow start.

He lined up fifth on the grid in a weekend dominated by Yamahas, but remained close enough to threaten to join the fight for victory.

However he lost the front end on the uphill run to the first chicane on lap 18 of 28, in what was his second in-race crash in five 2017 starts.

"It's a shame as I was really focused on trying to finish the race," Marquez said.

"Since yesterday, I haven't felt totally comfortable with the front and and it seems like the first sector of the track wasn't 'my' sector this weekend.

"In the race I started quite well. Step by step, I started to feel good with the bike.

"But then suddenly the Yamaha riders started to be faster and faster.

"I knew where my rhythm was and I stayed there on my lap times because I knew that here the Yamaha bike is working really good.

"I was careful in a few points of the circuit where the crashes normally happen or where you feel more on the limit.

"But then at Turn 1 I did a mistake and after passing the bumps I lost the front."

Honda stablemate Jack Miller had a similar accident during Saturday's fourth practice session, but his bike gripped up and remained upright, heading towards and hitting the wall.

"The bike was a little bit unstable there in the fast corners," Marquez added.

"I think Jack crashed in a different way - it was when he touched the front brake.

"I pulled the gas and I lost the front. Maybe I was banking a little bit too much because I had a small movement in the middle of the corner." 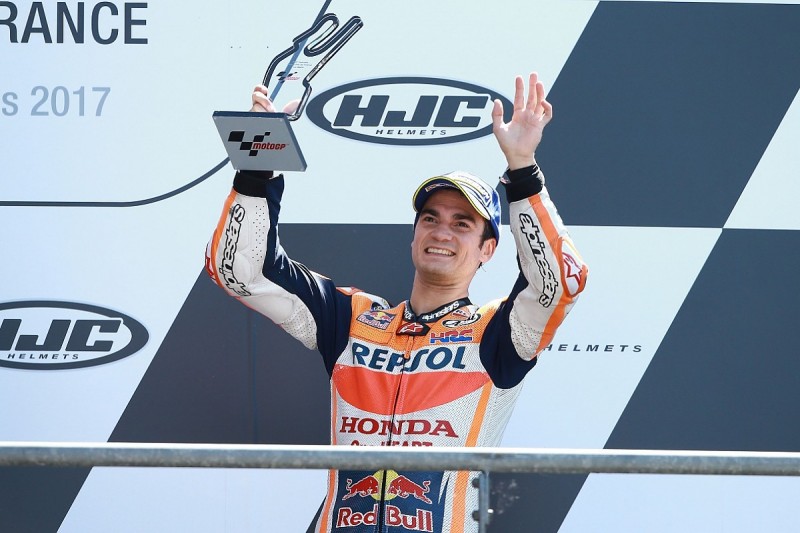 Like his Honda team-mate, Pedrosa showed good pace in the middle of the race, but ultimately could not challenge the Yamahas.

"In the last laps I struggled a bit more, I had some chatter on the front and I didn't know exactly why," he said.

"I was there in fourth position and couldn't really gain any ground, because the Yamahas started to be faster at the end, fighting for the victory.

"Also behind there wasn't really anything close, so it's a nice gift at the end from Valentino, which is an amazing feeling to be on the podium today after yesterday."