After the cancellation of July’s Finnish Grand Prix, the second-ever Styrian GP was added to the calendar to form an Austria double-header to kick off the second half of the season.

Reigning world champion Joan Mir set the early pace on his Suzuki with a 1m25.933s, with the Japanese marque finally bringing the rear ride height device it has been missing to Austria – though neither Mir nor team-mate Alex Rins appeared to use it in FP1.

Top spot changed hands in quick succession over the first 10 minutes, with championship leader Fabio Quartararo taking over from Mir moments later with a 1m25.854s on the Yamaha.

Honda’s Marc Marquez and Pramac Ducati rider Johann Zarco would also take turns leading the session early on, though it was Mir who took the longest stint at the top with a 1m24.428s set just over 10 minutes into FP1.

Mir’s lap time would stand up until the closing moments of the 45-minute session when Aprilia’s Aleix Espargaro took over with a 1m24.291s.

On a fresh set of medium tyres, Mir quickly deposed Espargaro with a 1m24.183s – but the Aprilia rider, also on fresh mediums, responded with an identical time.

Because Espargaro’s second lap of that run was quicker than Mir’s, that netted him top spot, though a 1m23.881s soon put the Suzuki back on top.

But a last-gasp effort from Nakagami on the LCR-run Honda put the Japanese rider to the top of the order with a 1m23.805s.

Mir ended the session 0.076 seconds adrift, with Espargaro completing the top three ahead of the sister Suzuki of Rins. 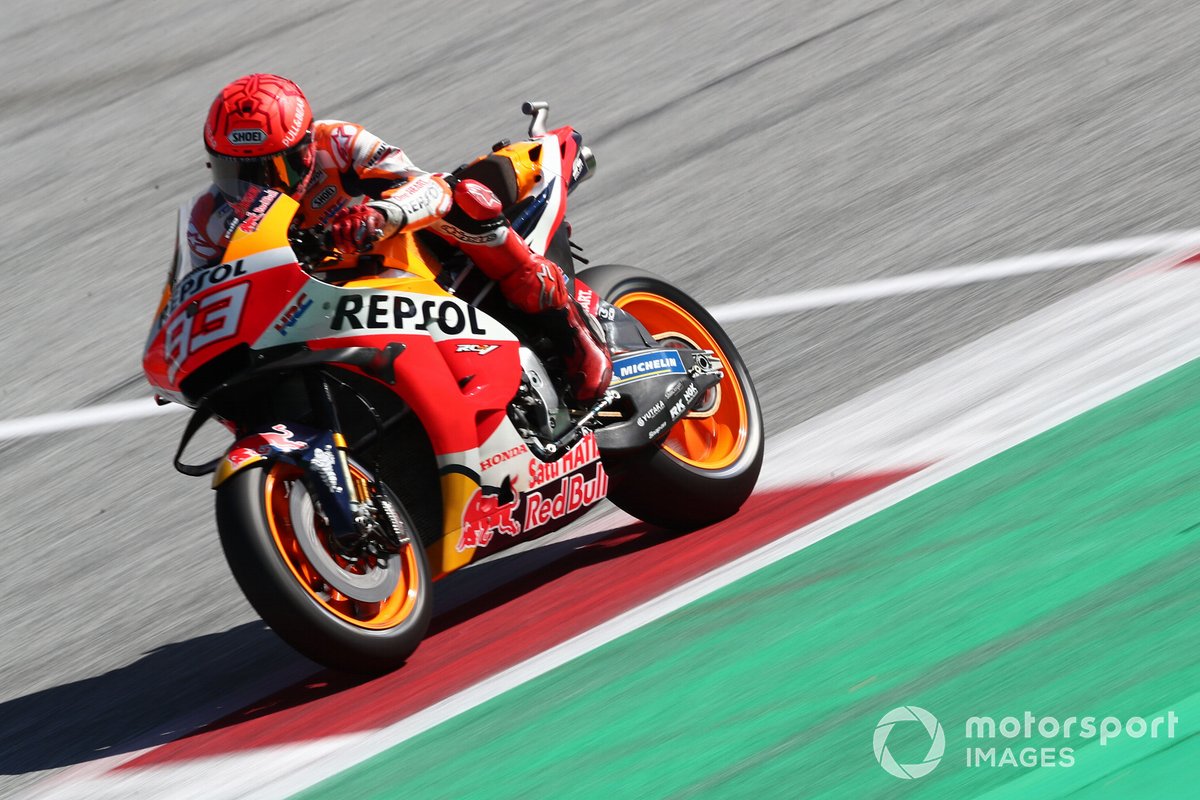 The top 10 was rounded out by Zarco and his factory Ducati team counterpart Jack Miller, while the returning Pedrosa was just over a second off the pace in 11th in his first official MotoGP sessions since his final grand prix in Valencia at the end of 2018.

The KTM wildcard’s FP1 wasn’t totally smooth, with an apparent mechanical issue with around 20 minutes remaining halting his session briefly.

His fellow KTM riders Miguel Oliveira and Tech3’s Iker Lecuona also had tricky FP1s, both suffering crashes up at Turn 3 – with a slow speed highside knocking the wind out of the former with 16 minutes remaining.

KTM has since confirmed Oliveira has been taken to the medical centre for precautionary checks after his crash.

Having announced his retirement from MotoGP on Thursday, Rossi was 16th on the Petronas SRT Yamaha as he began his farewell tour.

Rounding out the 23-rider field in FP1 was Rossi’s temporary SRT team-mate Crutchlow, who is replacing the injured Franco Morbidelli for the next three races.

Riding a MotoGP bike for the first time since a Yamaha test in April, the Briton was 2.2s off the pace as he takes to the Red Bull Ring on two-year-old ‘A-spec’ M1.