Running during the first four hours of the day was limited, as the track surface again dried out slowly following rain on Monday afternoon and evening.

Riders started venturing out on slick tyres early in the afternoon, and times slowly dropped as grip levels built up.

Tech3 Yamaha rookie Johann Zarco was the first rider to break the 2m01s barrier, and that benchmark was lowered by Alvaro Bautista, Maverick Vinales and Zarco again, before Iannone moved to the top.

The Italian set a 2m00.402s with just under two hours left on the clock, and the session was then red-flagged with one hour to go following a Turn 7 crash for Tito Rabat.

Marc VDS Honda rider Rabat was taken to the medical centre and then to Hospital Putrajaya for x-rays and further examination, having injured his left knee and right wrist.

Hector Barbera moved to the top with 25 minutes remaining, but was quickly pipped by Bautista and then Zarco, as Iannone fell to fourth in a lead quartet covered by just over one tenth.

With 11 minutes remaining, though, Iannone headed back out to turn a blistering 1m59.452s, 0.767 seconds clear of the field at the time and 0.228s faster than Casey Stoner's Monday benchmark.

Vinales improved on each of his final four laps to become Iannone's closest challenger, his 1m59.859s trimming the margin at the top to 0.407s.

Bautista wound up third, just ahead of Valentino Rossi, who along with team-mate Vinales jumped up from the base of the top 10 inside the final 15 minutes.

Both Yamaha riders also tried a new fairing designed to compensate the downforce that the now-banned winglets generated.

Zarco was fifth and Barbera sixth, ahead of factory Ducati pair Andrea Dovizioso and Jorge Lorenzo.

Surprised by how difficult his first day at Sepang was, having languished in 17th place, Lorenzo was more competitive on Tuesday, finishing 1.032s off the pace set by Iannone. 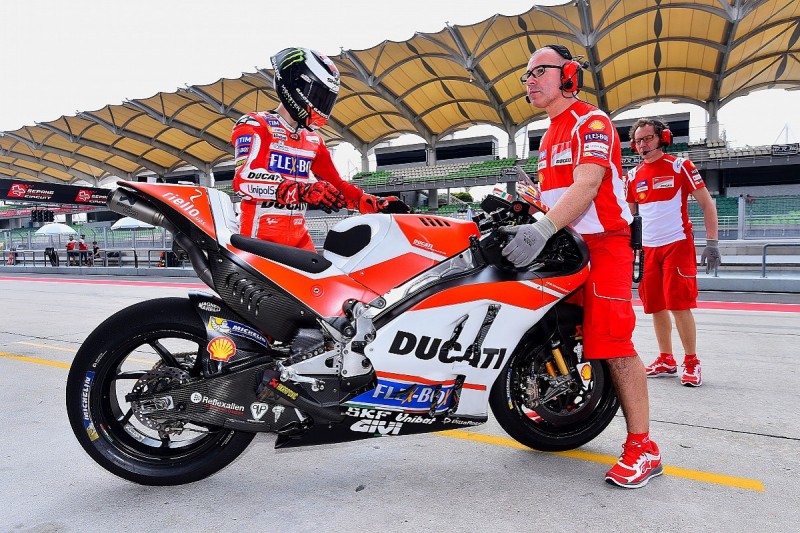 Marquez's Honda stopped on track early in the afternoon with an apparent electrical problem, while stablemates Cal Crutchlow and Dani Pedrosa were 12th and 14th.

Aprilia's Aleix Espargaro - who became the first rider to crash during the test on Tuesday afternoon - was fourth before the late flurry and fell to 11th in the order. His rookie team-mate Sam Lowes was 22nd.

Pramac Ducati pair Scott Redding and Danilo Petrucci also fell on their way to 15th and 17th places, along with Avintia Ducati's Loris Baz in 18th.

Pol Espargaro was the best of the KTMs in 20th place, 2.073s off top spot, with team-mate Bradley Smith five spots and one second further back.

The test concludes at Sepang on Wednesday, with Stoner expected to rejoin the field after Michele Pirro's running on Ducati's test bikes on Tuesday.