Redding expected Aprilia MotoGP bike to be 'easier' after Ducati

Redding ended last week's two-day Valencia MotoGP post-season test 19th-fastest in the combined times, two seconds from the top and 1.3s off the pace of his Aprilia team-mate Aleix Espargaro.

"[The Aprilia is] different, I have to say, I expected a little bit easier than the Ducati," said Redding.

"It was not more difficult but the engine style and chassis style was quite a lot different.

"The bike is not naturally doing things that it should do and you need to over-ride it a lot on the brakes.

"I was doing that, but my level to his [Espargaro's] level was again another step.

"Aleix is making it work so it can be made to work but it is very rider-demanding."

Redding said getting used to "an angry engine" was the most difficult part of the Aprilia.

"To me, that's the hardest bit, the response on the gas," Redding said. "It is quite an angry engine.

"They do a great job on electronics and chassis to help that but the engine just needs a bit more rider feel and feedback.

"It works, but it could be a lot better. I think they will work to make it better, again, this is is an over-riding thing to make it work.

"It was quite different. Not a lot of engine brake [compared] to what I was used to but the bike stops well, turns well and it is just understanding how to make it work." 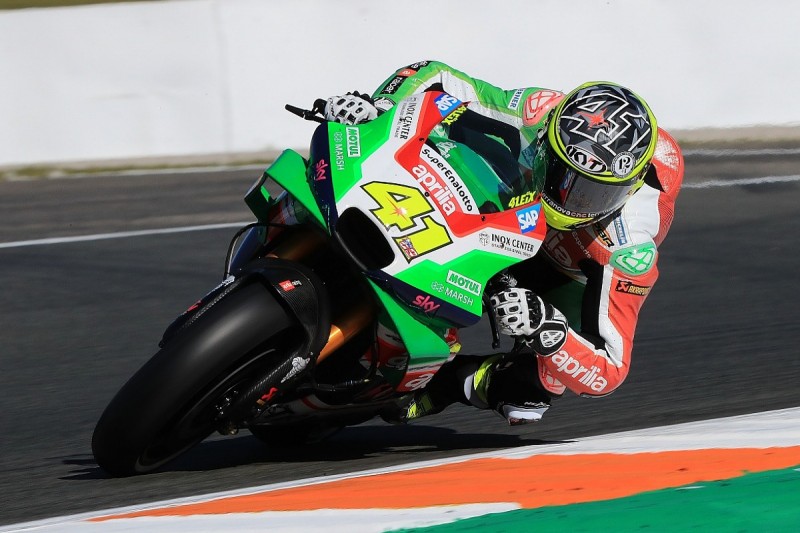 Redding's team-mate Espargaro said one of the main changes he wants from the 2018 RS-GP is in its weight distribution.

Espargaro revealed he spent his first season with Aprilia putting more and more weight to the front of the bike, as predecessors Alvaro Bautista and Stefan Bradl had different riding styles.

"From last year when I tried the bike first time to all of this season, the biggest evolution we had was to always put more weight in the front," explained Espargaro, who said further weight distribution changes "immediately felt good" when tried at the test.

"Last year, the other two riders tried a lot with the rear and I have a completely different riding style.

"To ride a lot with the front we need confidence with the front, so this is what we had changed this season, and with the current bike, we couldn't move anymore.

"So with the '18 bike, the idea was to change a little bit the engine and also my position to be able to carry even more speed in the entry with the brake on the hand."

Aprilia will take part in this week's private MotoGP test at Jerez, but Espargaro revealed the full 2018 machine will be only introduced at Sepang next year.