Yamaha rider Maverick Vinales took the unusual step of doing his first run with the medium rear tyre, and led after the opening series of flyers - improving by three tenths of a second on his second attempt to end up on 1m23.628s.

Yet Marquez overcame Vinales almost right away with a 1m23.359s, retaining a quarter-second lead as the 15-minute Q2 session passed its halfway point.

By that point Vinales had switched to a soft rear, and after a few attempts he whittled Marquez's lead down to 0.164s.

The championship leader responded immediately once more, setting a new track record with a 1m23.027s.

Marquez was unable to improve on his two final laps but his pole came under no threat, with nearest rival Fabio Quartararo coming up 0.434s short at the chequered flag.

Quartararo's late improvement relegated Andrea Dovizioso into third, the Ducati rider having surpassed Vinales by just 0.008s for what turned out to be the final place on the front row. 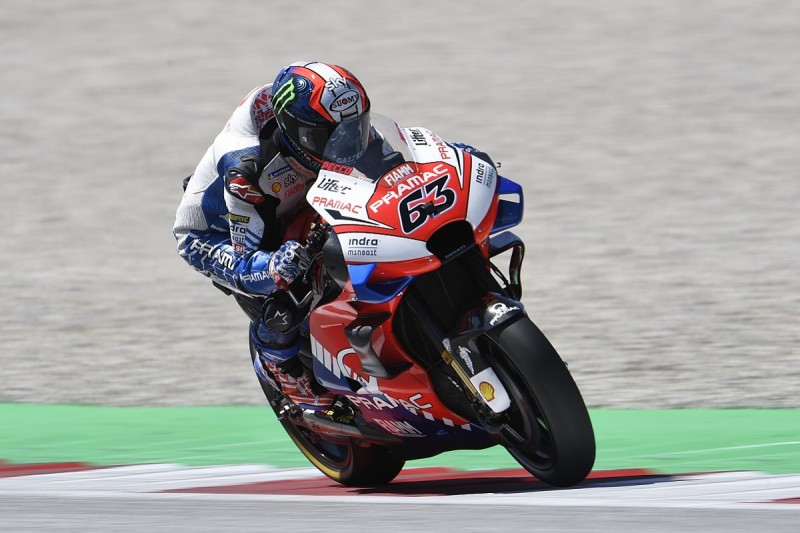 Bagnaia had come through Q1 alongside LCR Honda's Cal Crutchlow, who will ultimately line up ninth, joining Suzuki's Alex Rins and Bagnaia's Pramac team-mate Jack Miller on the third row.

Like Vinales, Valentino Rossi ran the medium tyre early in Q2, but the Italian ended up only 10th, ahead of KTM's Pol Espargaro and Ducati's Danilo Petrucci.

Petrucci crashed at the downhill Turn 4 right-hander and completed a Q2 order split by just 0.937s.

Tech3 KTM rider Miguel Oliveira sat at the top of the Q1 timesheets when the chequered flag flew in the opening segments, but last-gasp improvements from Crutchlow and Bagnaia denied him a spot in the pole shootout so he will start 13th.

Behind Oliveira, Petronas rider Franco Morbidelli was the sole Yamaha out of Q2 in 14th, while Tito Rabat came close to his best qualifying result of the year by taking 15th, 0.003s up on the second works KTM of Johann Zarco.

Former lap record holder Iannone will be the top Aprilia rider on the grid in 18th, having beaten team-mate Aleix Espargaro in qualifying for the first time this season.

Honda test rider Stefan Bradl, standing in for the injured Jorge Lorenzo at the works outfit this weekend, will start 21st and last.